Running Day
Everynow and then to break the monotony from scenery and layout building comes a time when friends come over for a run on the layout.
This usually involves a last minute scramble to remove all the work tools from their resting spot (see previous notes below) and packing them away in a spot that I can remember where I left them.
I must admit that these days are good to reassure one that the layout still operates. Before each session comes the 'Running of the Locos' (just like the bulls in Pamplona). This is to make sure the loco gets all the way around and hopefully all controllers are working fine.
One of the main crossovers was working fine yesterday, this morning one point motor decided not to work. Now for some reason a wire from the point motor had decided to come adrift, and a quick solder had it working again. These are the sort of things that usually stuff up on the day when visitors arrive.
Then the gremlins struck again. All three tracks through Narooma decided to take a rest. But believe it or not by opening the panel front a short in the wiring dissapeared and the train started running again. But if we closed up the panel gently then it seemed to work again.
These running days are also good when visiting locos get a run. Some that are out of my modelling era but no less fine models. At one stage there were about 4 32 class, 620 class, A class, B class, T class and a fine mix of interstate and a container train.
It surely is a great hobby when we can all get together and share our love of trains. Thanks Mike, Mat and Adam for coming, hope you enjoyed the day.
Here is a selection of the visiting trains that turned up for the day. 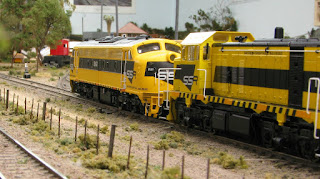 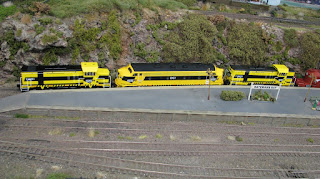 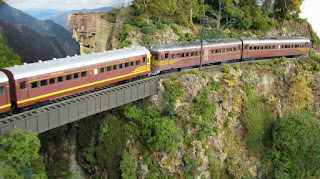 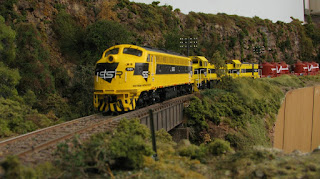 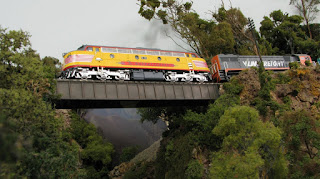 Ballasting at Bodalla
To do further ballasting at Bodalla I needed to build a level crossing there. This gave me a border in which to bring the ballast up to each side of it. I was constructed from a combination of sheet cork and matches to go in between the rails.
This level crossing gives access to the railway station, one solitary shop and also the goods yard. It goes against all design principles as it it placed right in the middle of the loop not to one end. Passenger trains will only obstruct the loop for a short while but when the freighters go in for a cross that is when there is going to be mucha horna honking from the cars held up at the level crossing to get it moving.
Bodalla although quite long is narrow and situated on some real estate just down in front of the branch line terminal of Candelo. It breaks the section between Batemans Bay and Narooma. 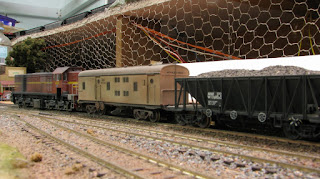 In the photo above a 49 class has been working a ballast train between the platform and the level crossing. The chicken wire unfortunately stretches for 2.4 metres along Bodalla's length and will take some serious time to get completely scenicked. In the background is the shops location which will be right up against the side of the hill. Well at least they will get plenty of shade from the afternoon sun. I think they were game setting up shop so early as the station is not open yet. 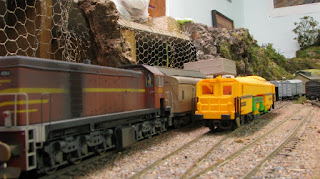 In the last shot one of those big yellow machines has come to tamp down the freshly laid ballast.
As the layout progresses, I am slowly encountering another problem. Where do I now put all my tools and junk the the baseboard has happily accomodated all this time. When you are laying track, you have drills, hammers, nails, files, pliers, heaps of etceteras and all other sundry pieces laying close to hand. So as each section gets completed, then I have less room to leave the junk. I am certainly not one of those persons who puts all their tools away each night on a shadow board. I guess when the layout is finished I might invest in a tea trolley. (Mum have you still got that one I made in woodworking class 40 years ago?)
On another issue on a slightly similar vein, I recently put a drop curtain along in front of Batemans Bay. Now while it looks rather nice, all it has done is hide all the "stuff" underneath and to find it again I have to keep lifting it up the curtains to find the item I'm looking for. So cure one problem and create another.
Posted by South Coast Rail at 25.10.09 1 comment:

Bodalla
Well thats where all the action has been for the last couple of days. The old code 100 track has been lifted and the code 75 is now in place. Ballasting has been partially done in front of the platform.
The prescence of the track should now set at ease the two gentlemen from the previous post. 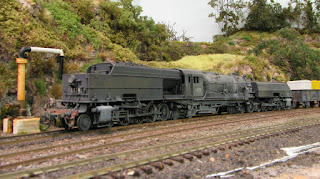 During the week I put together a PC3 station building from Casula Hobbies. Let me recommend this kit very highly, it went together perfectly, the file was never used once in anger. I still need to add the watertank and downpipes but as the station is not open yet for passengers (I refuse to use that latest term 'customers') there is no hurry. The roof and walls have been suitably weathered. (aren't we the complete opposite to model car collectors, they want their models to look shiny and new and we just go on and make everything dirty!)
I will return to work next Monday after two weeks off and only achieving a few of the things on the list. Never mind its only about ten weeks till another lot.
Thomas
I was watching on TV today a show called "Worlds greenest Homes" and in the introduction for the show when the family was met, one of the kids was playing with his Thomas the Tank engine push along train on the floor. Its probably been said before but can you relate to how many kids this has brought into the hobby?
Sure it has become a huge commercial venture, but who cares! The TV shows and all the products available in the Thomas range have been a driving force to bring kids into the railway family.
Having said that my daughters Percy engine doesn't see much action on the layout.
Forums
I suppose I am a sucker for the model rail forums and follow a few. I find them sometimes interesting and learn a few things along the way. It's all part of sucking in information from where ever you can get it.
One forum has a thread on the ins and out of the 38 class. It is about to crack the 100 pages of verbal diatribe about the good, bad and anything else you can think of or make up. It seems sometimes people just like a whinge about anything. Look how much we loved our Lima 38's and 44 class. We knew they were wrong but most people had at least one. Something better comes along and so then you can go and drop a brick on your Lima 44's.
What about some of the early sticky resin freight car kits we had and thought were great? I reckon you could you them as a lint remover.
Anyhow I'm over the 38 thread rantings and won't read that one again. 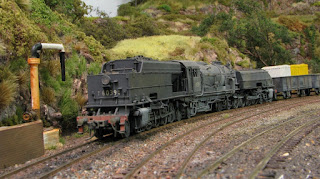 Just another parting shot of the garratt about to take water at Bodalla. The siding to the right will be the new stock siding.
Posted by South Coast Rail at 17.10.09 5 comments:

Liverpool
Well like the majority, I made my way down to Liverpool on the Sunday of the Long weekend.
Arriving there around 9.15am, there were no queues out the front and it was relatively quite inside.
I had studied the layout guide on line before going and other than Wallerawang there did not seem to be many new layouts to be seen. This fact did not worry me as I don't missed any October exhibitions since it has been at the Sydney Town Hall.
The trade stands seemed to be located around the outer walls and then the layouts towards the middle.
Stringybark Creek the O scale layout was a standout to me. I have a friend who has gone to this scale from HO. The comparative higher costs for vehicles and locos is balanced by the fact you can only fit less in the same space. Put me down for this scale if the train shed burns down.
This also a good place to catch up with friends you haven't seen for a while and you should allow time for yackity yak when going.
I only had two major purchases for the day. One was the PC3 building from Casula Hobbies. (Good on you Joe) and the other was some scenic material from Orient Models who had come over from Adelaide. I hope I made their trip worth while as I purchased over $100 of their excellent scenic material. As soon as I got home one package of scenic grass tufts was put into place. At $38 a packet it doesn't go far but looks excellent. I ordered more from them on Tuesday and expect it here this week. You don't mind paying for a product when it is good.
The PC3 building is to go onto Bodalla platform.
I finished off Sunday afternoon a little sadder for Parramatta as they went down to the Melbourne Storm team.

Bodalla
This location is one of a few locations left on the layout that still has the original code 100 rail. One of the purchases from my friend the O gauger was his code 75 track. Narooma has been relaid and now I have lifted the track and started to relay.
Bodalla is not a major town. It has a crossing loop, a goods loop, a private siding and a new stockyard siding that was not there previously. With only room for one small shop this town sits along the edge of a cliff that runs the full length. This fact is not lost on rock climbers who can go from Bodalla to the upper town of Candelo in about ten minutes. 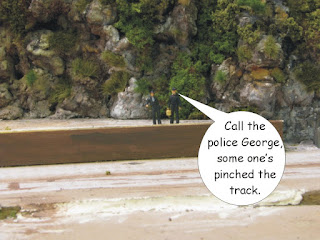 As you can see Harry is a bit upset that the track is gone but I told him it is coming back soon. 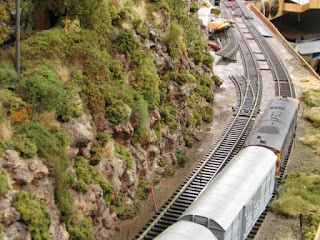 A 44 class tries out the new track. As soon as all the hammering, banging, gauging, wiring, soldering, checking, ballasting, photographing is done then it can run through.
Posted by South Coast Rail at 7.10.09 No comments: