Yes I know I should be working on the bridge but the next bit to be completed will not visible at normal viewing angles. It will involve the detailing of the underneath section.

Last post I replaced the dodgy home made point which seemed to derail a train each time one passed over it. It was replaced with a commercial Peco point and now everything seems to work through there okay. Having the track in place I then decided to start on the level crossing that runs from the edge across three tracks and into the coal loading point. When this corner gets completed then the scenery will then be nearly finished from leaving Eden right up to Broadwater. And once the 'bridge' is completed then one half of the layout will be scenicked. I can't believe how long it has taken just to get to this stage but it has been an enjoyable trip this venture into narrow gauge.

At this section of the layout I have laid it on cork to enable a ballast shoulder. This complicated the laying of the cork used for the level crossing as it also had to be packed up level with the rails. Prior with the hand laid curved point I tried to super elevate the track on this curve but it complicated the crossing build as there was not a level section across the three tracks, so the super was eliminated in the rebuild.

The track in the foreground will eventually curve around towards the town of Bega and allow more operation of the layout. Trains will be able to depart Eden, traverse the layout through to Bega and then return via a triangle leg back into Bega. None of my locomotives are tender locos but this triangle can be used to turn visiting tender locos as there is no turntable on the layout. 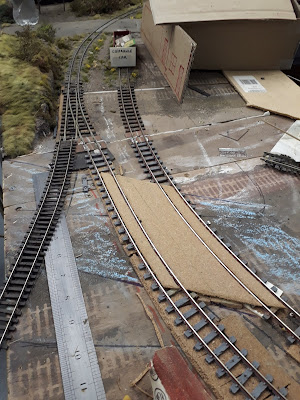 I have an endless supply of 'ballast' courtesy of the local council carpark at the oval so I laid some up to the level crossing to make the area look more complete. Bonded into place with pva glue it soon hardens and is then ready to receive its supply of weeds. I have many containers of various weeds and grasses ready to be recycled into the new layout. The 'good' stuff is expensive so it is all kept until required.

In the above photo a paper mockup shows the position of the mallee shed being provided for any passengers. It will be a dual line station as the branch from Bega also runs behind the shed. More local dirt has been spread as the first layer. When I get to make the mallee shed I will make a few as there will be a couple on the layout. 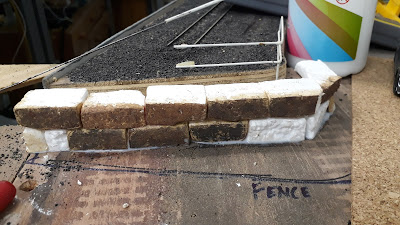 Another quick project was to complete the scenery around the raised track that leads into the coal unloading area. I had recently received a package that had white foam blocks inside. Normally it would have been chucked in the bin but when I looked more closely it seemed that it could make sandstone blocks. They were white glued into place and then painted with some brown paint. When you see the first picture it seems like the end product won't turn out any good but I kept going and it slowly came good. 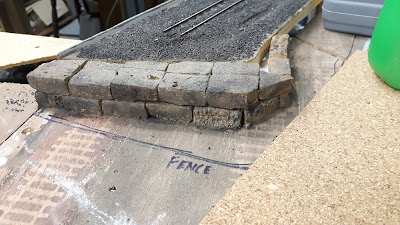 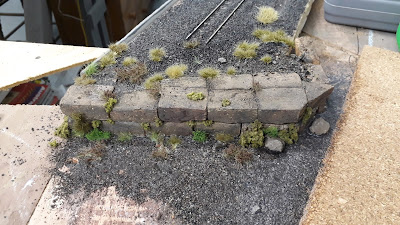 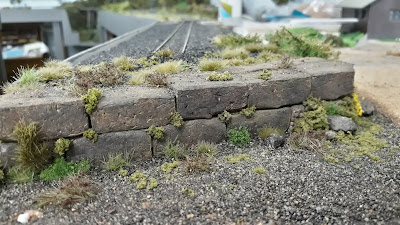 So I was happy with the end result, hard to believe it was just foam. They were naturally finished dark as they will be close to the coal loading plant. A few yellow flowers has brightened up the scene.

This is the latest work I have been doing, it doesn't have to be a lot but always moving forward.