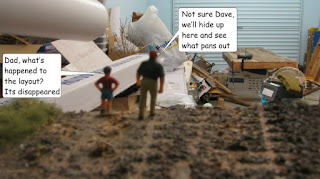 It certainly came as a surprise to Dad and Dave, when they stumbled to the edge of the layout and looked out over where there was once a layout they enjoyed riding on. Sorry boys no more.
Progress has been made since this shot was taken, in the middle of the photo above is now a baseboard that was formerly Bega. Luckily Bega was made up of baseboards 1.8 metres long, so two were dedicated to form the new town of Eden.
It has been decided that at least the first build of the new layout will be on modules that can be taken apart for whatever reason.
Two boards now reside in the centre of the shed, wingnut bolted together. The legs are also wingnut bolted together, the finished product seems fairly sturdy.
Since the last blog finally some track has been laid. I have started on the main board that has most points on it. This includes the loco shed area and a few goods sidings. The main line out of Eden will be on a left hand 30" radius curve. Although it's stated that the NA's will handle an 18" radius curve I hope I don't have to go down that sharp. The broader the better. My lottery dream is to one day have a G class garratt run on the line, so I have to provide for it now.

Well as can be seen with the above shot, the track laying has commenced. I am using the Peco narrow gauge track. I am not a great fan of the ragged edges of the track as I don't think photos I've seen of the VR track looked that bad. I might be able to cut the edges straight. In the end it will be well covered in dirt/ballast and won't be so noticeable.

Being new to DCC is have sought wire advice from Marcus Ammann. The gauge of the wire is certainly much more thicker than required to get my old layout going. I have cut the webbing under  the rails to hide the solder joints, just a bit fiddly lining up the holes. Although the Peco package containing the point advises that the points are DCC ready without modification I have chosen to run a wire down from the frog area in case its required in the future. I hope not as that will require further switches being installed.
I was wondering what form of point control I would use on the layout. Initially I was going to use the Peco point motors, but after the fun I had under the last effort at Candelo on the old layout working out diode matrixes to enable route control, I decided to virtually go mechanical. I was given some wire from a mate Kevin many moons ago and it was stored under the layout. Surprisingly I refound it and decided to use it for point control. I drilled a quarter inch hole under the middle of the throwbar. Into the centre hole in the throw bar the rod was bent 90 degrees and fed back to the layout edge in a channel formed with a router (thanks Kev). Around the rod I placed an 1/8th tube. At the edge of the baseboard the rod will again be bent up 90 degrees and a 44 gallon drum will be placed over it to form a knob for point operation. Although this will be not as quick as electric point operation it will be more realistic to my mind.
The trough with the rodding in can be filled in later with either tape or pollyfilla to make level with the baseboard.
The above photo shows the rodding at the baseboard edge to be finally cut later. I will finish this off with the drums for knobs. The channel to the edge of the baseboard for the rods were made perpendicular to the point, this resulted in a few channels crossing over each other, but one channel was made slightly deeper to overcome this issue.
As can be seen in the photo is the outline of the old HO track. I am laying the track directly to the baseboard and don't see any need for underlay on this section of track. The former Bega was also directly laid to the plywood.
Today I have started to lay the track on the second board. This will have the station, transfer shed and a few good roads on it. The tracks have to cross over the join here. It would be nice to be able to just lay straight across the boards, but if it is to be truly portable I will have to do the hard yards now, so it can be pulled apart in the future.
With a bit of luck I may have all the trackwork laid soon and then the test will come with the power applied, hoping it all works.

What will be.... hopefully. Well after many months thinking, planning, demolishing, selling, thinking, painting, cleaning, coping, building, typing and soon to be laying and wiring. I feel I am getting over the 'ing' disease. All those 'ing' words involve an amount of physical and mental attention.
I enjoyed building the old SCR, its plan was developed with just a pencil on paper and the route it would take for the main line traced out. When developing a track design, depending on the state or railway you follow there are certain elements that needed to be included. Following NSW's railways for most of my modelling, the final design, especially Bega the main station, followed that ideal.
So when it comes to modelling another style of layout, now being narrow gauge, you have to get your mind around that particular way of laying things out. Armed with all the books I could get on the Victorian narrow gauge, it then became a case of trying to follow narrow gauge design.
In building the new layout, I decided to begin with the terminus and work my way out from there. I have called the terminus station Eden, trying to maintain the South Coast line flavour at least in names by not necessarily true to history. That part is where the imagination steps in. It will contain the usual elements of a terminus that being a station, engine shed, goods shed and a typical transfer shed based on what is at Colac. It will be interesting to shunt, making and breaking up trains all part of operational interest.

I have included the diagram above of probably one of many versions of the intended layout. The intention is to start on the left hand side of the entry label. To date the old layout in this area has been demolished, the walls repainted and the floor rediscovered. What will be the final design for Eden is shown on the diagram. The plan is to have a 180 degree turn to the wall at the top. At this stage I will try and include a small area to unload the coal wagons. This will be their final destination having come from the "Coal Mine" to be unloaded and returned for more. This will be on the top board but will only have provision for emptying two hoppers at a time. This will require three local shunts out from Eden to unload the coal. It will include a van which will be left on the main line while the wagons are being unloaded. Plenty of scope for operation.
The brown shape will be a factory based on the Nobelius siding on the Belgrave line. It will take louvered vans and maybe a few open wagons for loading/unloading.
As can be seen from the plan the layout is eventually going to continue around the complete shed and will form full circle by way of a liftout section at the doorway. A triangle leaving Eden will also aid operation with the ability to go in either a clockwise or anti clockwise direction. This will also allow certain types of locos and rolling stock to be turned removing the need for a turntable.
Four crossing loops will be on the outside wall layout. When you move up in scale its spooky at how the distance between stations gets smaller. I'll just run the trains slower!!.
All the baseboards on the left hand side will be made on modules and not permanent. This means if I move I can take it with me or if I cark it then it can be sold off. Win Win. But by the time I get around to building the right hand side of the diagram, I think I will just build over the old layout. Some of the scenery around the gully and the far right hand wall can probably be slightly modified for the new narrow gauge style.
To add to further shunting operation I have included a branch line. This will involve shunting the train at the junction station before heading to the end. On the branch (In blue on diagram) coal and timber trains will need to head to the terminus and shunt before reloading. Coal trains will reverse down to the mine for loading then have to reshunt the brakevan, proceed back to the terminus, again reshunt, then head back towards Eden. All part of the fun.
Two features that are the benchmark in my mind for the narrow gauge railways are the trestle bridge outside Belgrave and the Thompson River bridge on the Moe to Walhalla line. The Thompson River bridge scales out at around two metres long and I look forward to the challenge of building it in the future.
Well thats the current planned outline of the new layout. We all know how things can change but we will see how it all pans out.