Further Down the Track

It was the past week that made me wonder why am I doing it? On the ground on my bum with hands extended up to the bottom of the layout trying to get a wire through a hole.
I must be a masochist wanting to go through this rebuild. I was happy with the original design of Candelo, being an interesting place to terminate and shunt and also the accompanying coal mine to add to more shunting interest.
So I have done the easy part the track relaying. Up with the old and down with the new. The only "hard part" was the stretching of the body up and over the layout perched on my Aldi steps. This was for the laying of two industrial sidings, the oil and meat products. Candelo will need these to add some shunting interest.
The next part of the picture was the reconstruction of the control panel. (DDCers can stop reading now). After finishing the art work for the panel it was laminated, cut size and glued to a new piece of ply. Then the push buttons and section switches from the old panel were recycled to the new panel. Its surprising how the amount of wire multiplies when viewed underneath. A day or so spent on the stool with the radio or music in the background for company had most of the components rescrewed and rewired on the new panel. What I was trying to do was to reduce the amount of rewiring by taking sections already wired. To some extent I was trying to see if existing wiring from the old Candelo would already be in place to save re running new wires. But trying to trace out existing wires was almost impossible due to me using the closest wire to hand and with a large roll of red and white wire available it looked like a tribute to the St George Dragons underneath.
Now there was also another problem, a major one. Best described if I liken Candelo to a triangle and on the hypotenuse sat my bookshelf of rail books and reference material. And behind that out of site out of mind was a pile of boxes from all my newer railway purchases. Naturally all shapes and sizes.
I had gone now beyond the point of no return and it had to be done. Even if I had turned to DCC I would still have had to get "under" to wire in the points.
So for the time being I needed a new position for the book shelf. This was found under Bega and eventually the books were all in their new home.
Now returning to the new hole under Candelo I was able to get to the pile of empty rolling stock boxes. Also not surprising was the amount of dirt that gathers over time. I yelled to the spiders that the vacuum cleaner was due soon. This was akin to dropping leaflets over a town before the bombs were due. When removing the bookshelf I remembered the floor wasn't painted either, out of sight out of mind.
Further along the layout directly below the control panel was another "street clean up find". It was similar to a book shelf in that it provided two shelves for putting junk on. So onto this project, cleaning it all up. There were photos, plans, copies of Roundhouse magazines, black and white railway photo negatives most nearly 50 years old, some which I have never printed and probably never will due to time constraints. I wonder what those shots of Lithgow roundhouse and Cowra look like back in the mid 60's?. I think most of mankind seem to be some sort of hunters and collectors.
My intention is to eventually get right round the shed and turf out as much as possible. A good start has now happened. Under Candelo on the floor it now looks good, only trouble is the crap is all elsewhere. 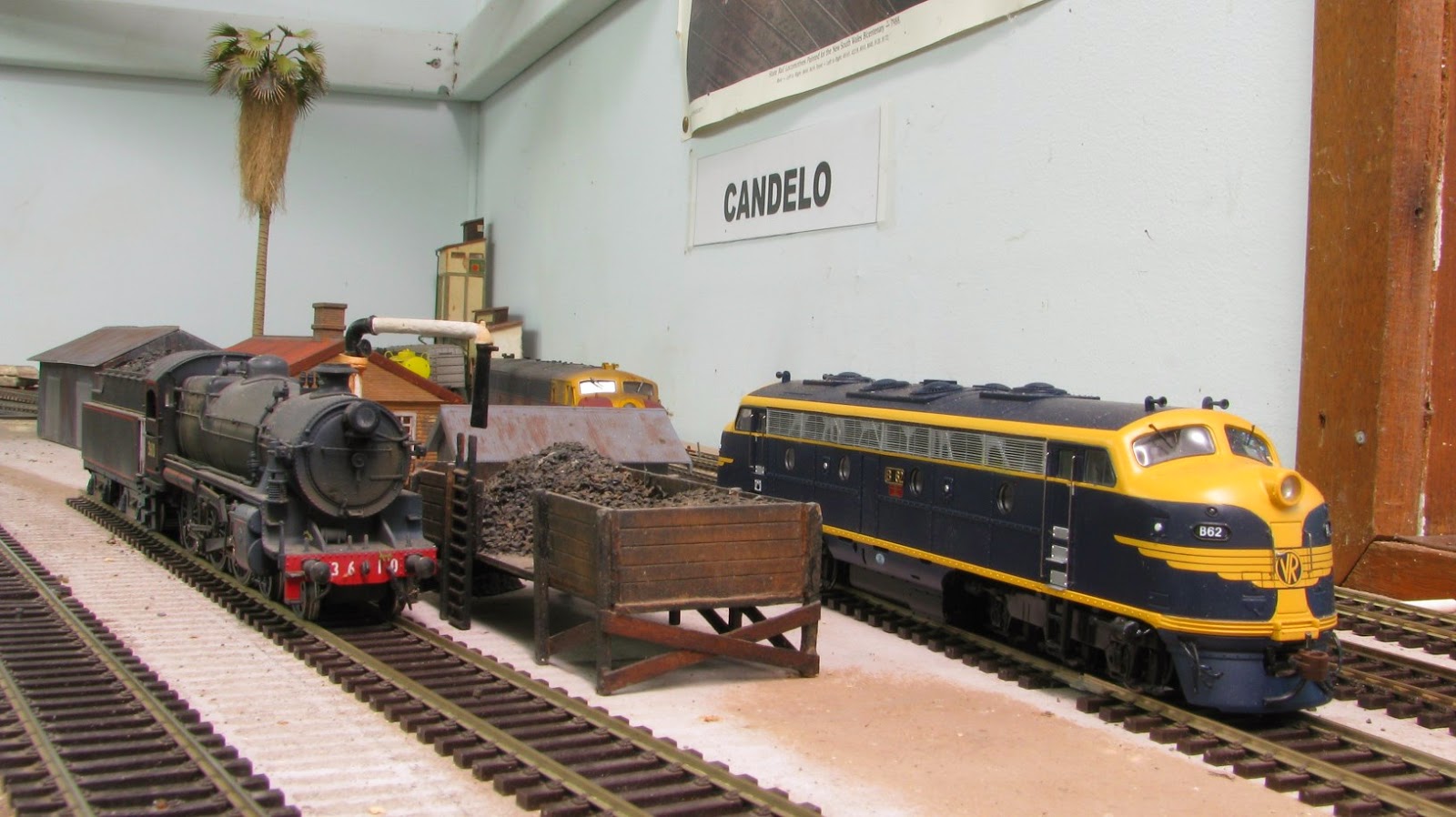 With now clear access to the rear of the panel and the layout from underneath I started to run the wires out to the various sections. Soon a loco was placed on the tracks, power applied and wow it actually worked. Eventually all sections were wired, now I have to move onto wiring the points. As I have decided to make the points with a switchable frog, this will require further diving under the layout to wire every point to a switch. On reflection of this wiring work required ahead, it makes me wonder why Peco couldn't build these switches into the point already and save us all this extra work. I am doing this to ensure reliability for the future. Come on Peco put your thinking caps on.
So the rewiring is well under way and with all the work going on at Candelo poor old Bodalla has become a dumping ground for tools and bits and pieces. So after Candelo is finished Bodalla will certainly require going over again. 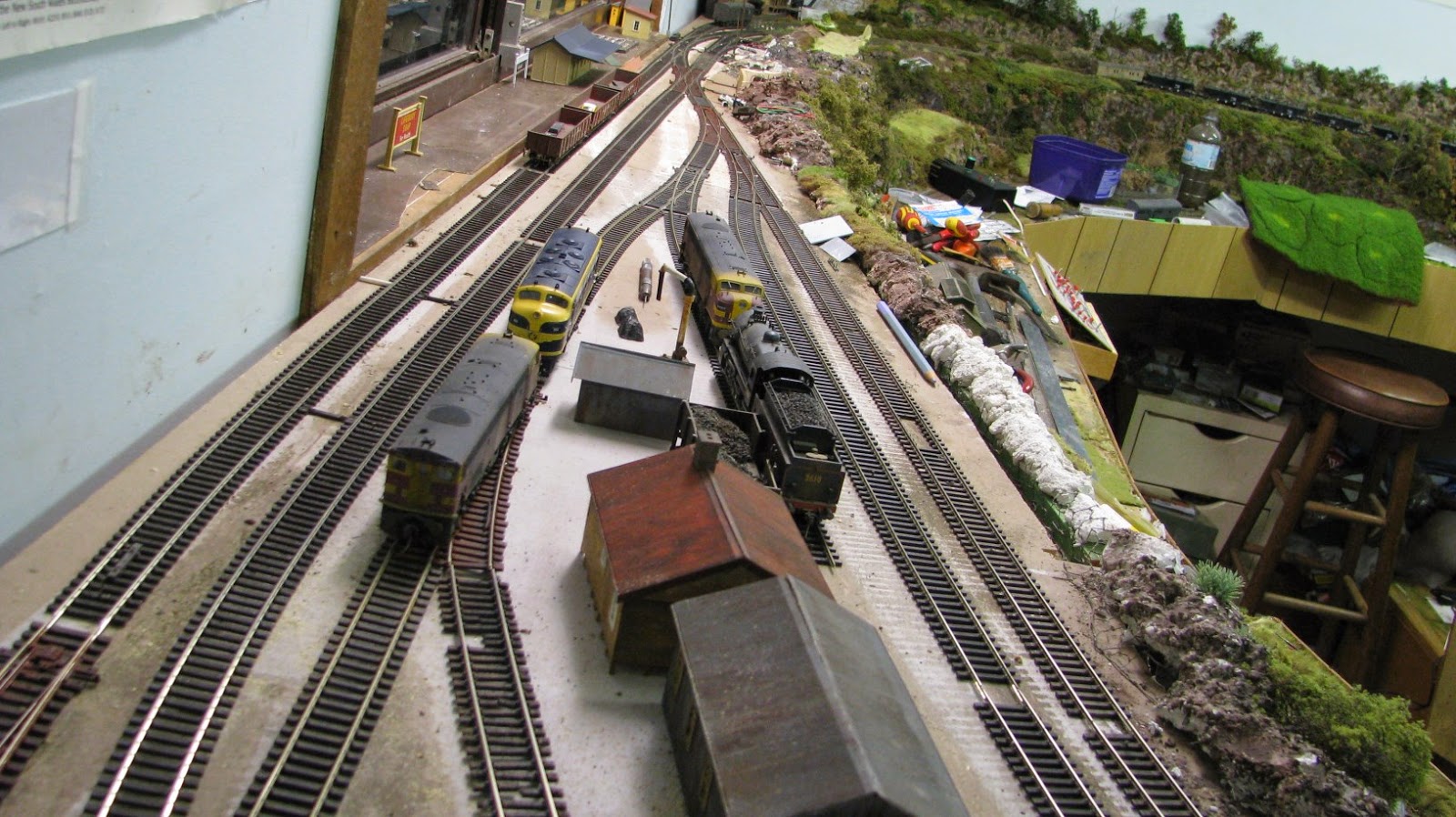 On another matter that is not close to my heart, I hear that DCC is celebrating its 20th birthday. Apparently Joe Fugate from Model Railroad Hobbyist is commenting on the fact that 20 years with the current technology could be getting old hat.
Maybe its time for the next revolution? They are saying that Railpro might provide the answers?
So by the time I am ready to jump onto the DCC bandwagon I might be tracks ahead??
If anyone is interested I have for sale the series Byways of Steam from issue 1 to 20 including Encore of Steam which covers the workings around Orange. Asking $295 for the 21 issues. Enquiries to Byways of Steam