I suppose if you were modelling a ghost town then there would be no need to populate it. Not many of us do, so there is a need to find people i.e. model figures. When I made the decision to switch scales there are so many things to consider in making your final choice, the availability of O scale figures isn't a roadblock for the change over.

When I was in HO scale (the most common scale) there were plenty of figures available. The level of finish varied greatly from Prieser figures to mass produced figures from China best viewed from a long way away. They were also available 'naked' allowing you to dress them up in any way you wanted. How many modellers had started with the 'pink colour' saying I'll do all the hand and faces and then that's as far as it got. As you were painting the trousers an accidental slip of the paint brush had his nice blue shirt now a shade of brown. This is the stage when you thought I am not going to do any more and your economy drive to save money by painting your own figures came to a crashing end.

Upscaling to O scale meant the figures were going to be larger, less room for painting mistakes? O scale figures are going to be harder to source and Woodland Scenics have produced some in O scale which I presume being American based would be 1/4" to the foot scale (1:48). I have selected some WS figures when we were able to get into Victoria and they are still in the draw waiting for the day when they can come up to the layout for a breath of fresh air.

When making my layout I try to take the level of modelling up a level of my previous attempts. These days with technology and other advances such as 3D printing has allowed higher levels to be obtained. One advance has been in the use of 3D printing to make some of the most realistic figures ever seen. The use of computer technology has allowed us to overcome the 'scale' issue by just hitting a few keys on the keyboard and any scale can be achieved. One such cottage industry Andian Models has this technology and now have a great range of figures available. I have taken many photos of my NA's on the layout and when people keep asking is there any crew in the cab I can't keep saying "they are on the other side of the loco"😀. When we were able to have model railway exhibitions, I purchased a few figures at the Rosehill exhibition. The detail is outstanding, that good in larger figures you can look at the model and tell who it was modelled from.In modelling the Victorian narrow gauge in O scale I joined a Facebook group "Modelling the Victorian Narrow Gauge" It was my first venture into FB as I had resisted up until then. Unfortunately it is true the more groups you join the less modelling time you have. I suppose if FB are data trawling on me they will quickly come to the conclusion that I like trains, not much more to siphon off from me. So in this FB group I came across the name Ian Fainges who specialises in figure painting and I was even more surprised when he was linked to Andian Models for figure painting. I was able to contact him and he has been able to paint all of my figures so far. I haven't the skill to do to the same level, so I leave it to the experts. He has a quick return and although based in Queensland, borders are no issue for these small people crossing over between states.
In the photo above I have put an Andian figure hanging out of the cab, which replicates real life. It certainly brings more life to a trains appearance. This guy happens to be able to be wedged in the door without any glue. My only problem is while this can be staged for photos, when the train reverses they guy is looking backwards, maybe I can put a note on the work sheet to turn him around at the terminus so he is facing the direction of travel? 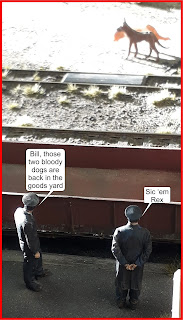 And the last word on figures is summed up in this Owen Thirtys pictoon where I discovered that having four NA locos, I would need at least 4 crew for the locos. 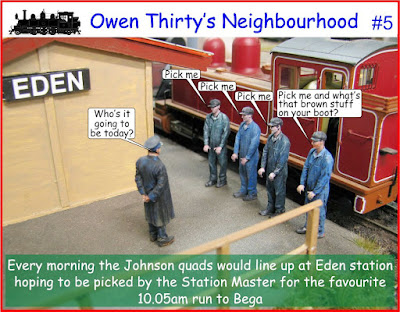 So add some figures to your layout, certainly brings life to the place.

Well as the title suggests, I have only been doing little bits down the shed. There are a few distractions around at the moment but moving closer to resuming an expanded work hours at the coal face.

I am constantly ducking in and out of the shed to obtain work tools that are either scattered around the shed or found in the logical place - the cardboard box tool box. They are easily obtained, I have many on hand. But each visit gets me itching to get back into working on the layout.

On one such visit I was looking at Pambula, the highest station on the layout and nearly completed. All that is missing is a building for the siding, a mallee shed for the passengers and a backdrop to enhance the scene. On a forum I was on Rod Hutchinson mentioned backdrop scenes available from Brunel Hobbies in Melbourne. I had a look on their website and saw three that seemed suitable for this area. They were around one metre long and 23 centimetres high which just happened to be the height of my backdrop. I rang the shop, ordered three on a Saturday morning and I had them the following Wednesday, not bad considering the corona virus screwing everything up.

The backdrops images are very clear (which hasn't shown up on the photos) and I have been told they can be reapplied many times, not that I will be moving them. I would have preferred a more greener scene with the grass, it looks very dry but as this location is viewed looking straight on it is isolated from other greener views of the layout. Yet another job to stick it all on but it is on the list. A great improvement. 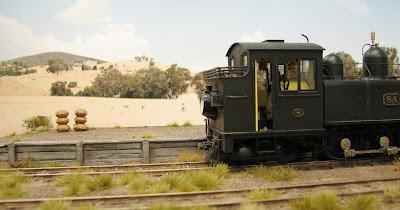 A long time ago when I was doing the design for the layout I made sure there were some industry sidings along the way. These add operational interest, somewhere to shunt a long the way. As you leave Eden around the 180 degree bend there is a siding that required a hand made curved turnout as there were no commercial narrow gauge curved turnouts that would suit. Way back in the past I had made many hand made points firstly on a model tramway layout I had and then hand laid points done in code 55 in N scale. Piece of cake I thought, so armed with some correct size printed circuit sleepers I eventually made a curved turnout. But I think it had been so long since I had made any points that I had lost the nack. Everytime a train would run over it there would be a derailment or stall even despite a speed restriction imposed over this point. Initially when designing the track I decided a curved point would look better than using two standard points but on one my 'visits' into the shed and armed with a standard right hand point and some track templates I decided to bite the bullet and rip it out.

The above photo shows a very bare area just after leaving Eden. The bare baseboard shows the ghost tracks of the former HO SCR still in place. The paper mockup of the mallee shed will be in a location known as Snug Cove which is an outer suburb of the real Eden. Although I didn't make this name up I reckon it sounds great and will be included. On the lower section of the photo is a track that will one day join the track on the top right across a lift out section and go onto the town of Bega. I haven't progressed this section as yet. Also can be seen the dead end siding of the coal unloader. A truck loading bin will be built to the right of the siding. Trucks will come over a level crossing near the bottom point and exit at the top level crossing. And lastly a proper building will eventually replace the cardboard replica. 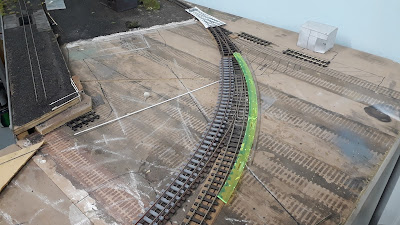 After some mucking around and an hour or two passing I was satisfied with the end result. If a commercial narrow gauge curved point was available I think it would have looked better but after running a test train through the new trackwork, there were no derailments or stalls so I was happy. This was a small job to do but it had been frustrating me that every time I ran through here there was trouble, not any more.

This was a quick fix ,so you never know next time I go in the shed for some tools it might result in more work being done on the layout.