That long ago....??
Considering April was very quite on the blog front and May hasn't been much better, I was looking back in my folders for an older photo to post and came across the December 2006 folder. 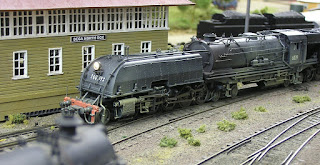 In it was some photos of my garrett. Quickly doing the sums it is now over five years since I have owned it. It came pre weathered which I thought was a pretty crappy job and had it re weathered later on to a much more satisfying look. And after the five years it is still running although not that much.

Another issue I have to tackle is the gathering of mould on the ceiling no doubt after all the rain we have had lately. I would rather use that excuse than to think my roof was leaking.

Another issue with the wet weather is that I have an opening swinging section to get into the room. It has two tracks across it one low and the other a higher level. It seems that being of timber construction it absorbs sufficient moisture to prevent it closing properly to line up the tracks. The rail is soldered to a section of printed circuit board on each side but lately they haven't been able to close and line up. Oh well as soon as it drys up some more I might be able to resume running.

A little bit more work was performed at Kameruka today. I just want to finish off this section and move onto another part of the layout. Plenty of areas yet to do.
Posted by South Coast Rail at 5.5.12 No comments: