Good night...
I have written before about a group of friends who have irregular meetings in each other homes for railway purposes only.
They are held roughly every four months when emails fly around for suggested dates. These dates have to dodge shift work, social calendars and other excuses. So if we have three a year we are going good.
Luckily they are all hang out on the north side of Sydney and at least two of the boys follow the same football team although I can let on our team lost tonight.
It was Ross's turn and I looked forward to seeing his nearly completed layout. 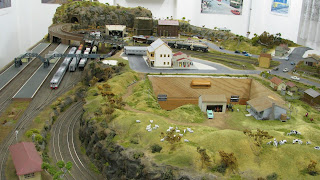 As can be seen from the photograph the layout is around 12 x 10 foot and sits in the centre of the room with sufficient room to move around the outside. A centre access hole provides reach for the bits in the middle.
We have watched the layout grow over the years and there is little left to complete. Ross is a perfectionist in all aspects of his work. Even the wiring in the control panel is beautiful and neat compared with my panel on SCR.
On thing in my mind he has really nailed is the ballast work. He claims a lot of it comes from the garden in the form of soil but it looks great as the photos testify. He has also done a great job on weathering some of the buildings and he quickly pointed out the pub he had just won from ebay (cream building in above photo) was about to cop the treatment.
The layout consist of two double track folded figure of eights, with a single exterior 'branch track' making three trains running at once. None of in the group have gone down the DCC road yet and I don't think this layout would gain from the conversion.
After an hour or so gabfesting and photo taking we moved inside for supper which is always interesting and settled down for a dvd to finish off the night.
Part of the discussion around the table is who turn is it next and a rough date. We settled on July which accomodates two of the members making overseas trips.
Again I have nothing to report on SCR but I will attach a few other shots I took of Ross's layout. 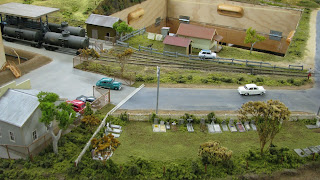 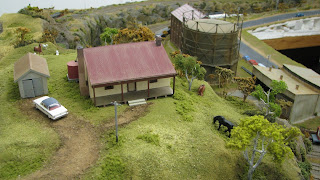 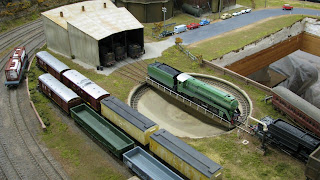 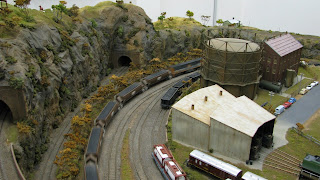 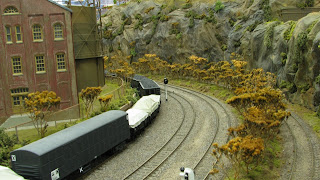 I see red......
Its just 6 days into Autumn and so far the plant is doing what it supposed to. Flower heads are forming and soon it should be full of red flowers. 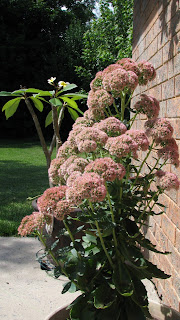 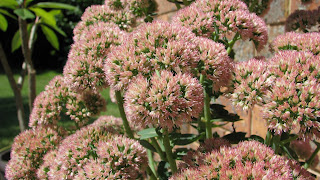 Despite the crazy weather we have been having, the plant seems ok. It has been a case of too much water rather than the opposite of too little I apply to the rest of the garden.


I just hope at the end of this "gardening segment" that the plant converts to a tree OK.

Can't believe we are into March already, where does time go?
The modelling front has been a bit quite lately. I found an old signal box kit that I think was made by Rails North?. It is a two level, probably fibro (asbestos?) box completely devoid of all character. It was probably chosen because it was an easy kit to make. The material it was made from is that grey resin, the stuff thats can be straightened under hot water. The joints at the corners were certainly not finished as flush as I would have liked but I reckon I can put a downpipe from the roof in each corner and hide the rough job.
There are also very fine strips that have a thin layer of excess resin that has to be scraped off. So far I have had a 50% rate of getting the resin off the glass without breaking the ribs but I will need to either replace them with styrene ribs or maybe paint on white fine lines. Just thought of maybe you can get fine lining tape?
Posted by South Coast Rail at 6.3.12 2 comments: