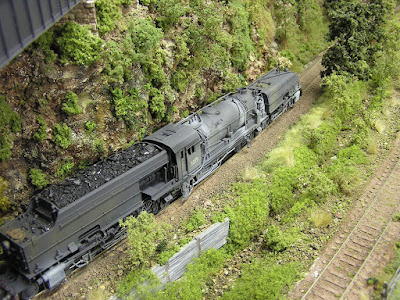 All about NSW
Well maybe thats an alternate title to the 'Modelling the Railways of New South Wales' gathering that I went to at Loftus today.
Trying to do my best for the environment I picked up an local attendee not long after the chooks had stopped crowing. A little bit further on and more carbon points saved I picked up another precious cargo, one of the presenters Mr Bob Taaffe (Mr Signals). He was to give three lectures so it seems there were a few interested in signalling. It was a case of delivering one Taaffe to another TAFE. A bit over an hour or so later we arrived at the Loftus TAFE. I was asked some time ago whether I could do some sort of scenery display and eventually agreed when I worked out I could take a lift out section of scenery of the layout, so that any time worked on it would end up for the good of the layout. Unfortunately the organiser who talked me into doing it was a no show. Did he get the call? to work??. But I was greeted by his work buddy and taken to my spot for the day.
Around 9.0am (my normal raise head time for a Saturday) we were given the rundown for the day and around 9.30am the first round of talks was underway.
I was in a room with some commercial stands such as Casula Hobbies, Bergs Hobbies, Uneek, Kerroby and the AMRM stand. It would have been a bit daggy if I only took the slice of scenery so I got a board and glued on a few samples of the scenery bits that all come eventually together. Chuck in a laptop with a scenery powerpoint presentation I had made some time ago, a few folders with SCR photos and off we went.
I did not go to any of the lectures but stood by the stand in case any one had any questions like 'How did you do that?' Scenery work is just one facet of the hobby. Some people are just not interested in it, possibly because they can't do it. Some are just content to collect trains and run them around plywood central. Each to their own.
To me scenery work is the aspect I enjoy doing. Not being a DCC man, wiring must be done but it has been. It made the day seem worthwhile when you get some modellers drop off and have more than a thirty second conversation. I spent some time talking to Allan and his son David and also Wayne.
I decided to go up to the canteen with Bob T for some sustinence. I had a cup of chino and some toasted blueberry bread with melted butter. (So yum went back for more later).
Well the day went quickly, I made a few purchases at Uneek and promised to put them into my box of rainy day items at home. So I can't tell you how the lectures went. And as we all notice at exhibitions the ratio of people with grey hair (and none) to those with any other hair colour and no wrinkles seems to be getting bigger.
I'd like to give a personal thanks to the guys who spent their valuable modelling time throughout the year to put on this event for our pleasure. I suppose its all part of life, there are always people who will volunteer and help others out and those who just go along with the flow and expect others to do it all. Around 1630 it was time to pack up and head for the road. An hour and a bit later after dropping of the two passengers I was safely in the driveway at home.
The bit of SCR is till in the back of the car waiting to be rejoined with the rest of the scenery down at Bodalla.
Thats a job for tomorrow. 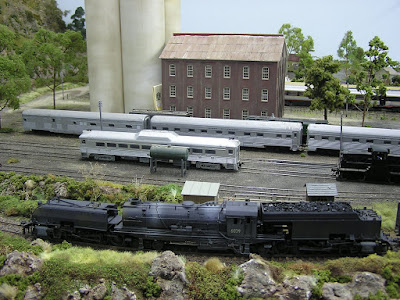 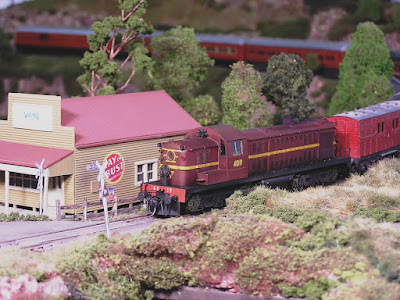 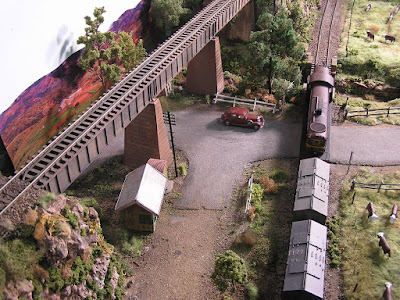 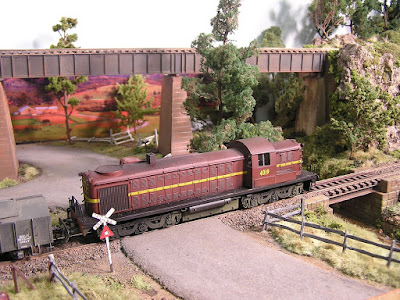 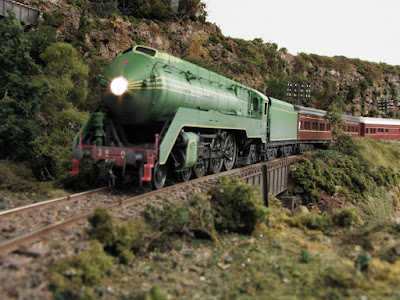 Getting there slowly
Well a week has gone by and I have had a chance to fiddle with the video editing programme and tried to make some sense of all the multiple drop downs and learn a new lingo.
I not sure whether being an older fart has any thing to do with the ability to be able to turn on and use a computer, programme a VCR or set an alarm clock and understand what you are doing. It seems if you were born in the nineties that a recent addition to the gene pool is an ability to turn on electronic components and immediately be able to know what you are doing.
Kids of today are educated in the use of buttons the minute they are born. So rocking up to kindergarten and being given a laptop is no big deal.
I studied the manual that came with the video camera and although giving me the basics, still didn't give me answers to questions I had like what format will will it end up in?. Thank goodness for Youtube and its many tutorials people have kindly made for dumfclots to learn by.
After watching one usefull Youtube on editing I managed to put something together. So at the end I needed to save all my work. Now all my life I have been told to "save as" when I've finished a file. Did this work? No. I looked for and "export' option and couldn't see that either. What I was supposed to do was to 'Render' a term I had only heard used previously with the word 'cement' put in front of it.
Anyhow I tried that and in the list of dropdown of option formats noticed the word 'pal' and chose that. This is the area where I think a clearer explanation could be given. Maybe they could be arranged in pecking order from best quality to lousy at the end.
One of the formats I has chosen and finally offered to Youtube to upload had a massive file size of 1.15gb. After nearly choking the Youtube server, it got revenge and invited me back after 658 minutes to see my results.
After another visit to my resident IT guy, we worked out a smaller file size and I have uploaded it tonight.
Go easy on me, its my first attempt at editing and trying out the camera. And I know you might get sick of seeing 6039 starring but at this stage its the only sound loco I have until Uncle Rons 40 class turns up. If I use other non sound locos then I will have to scrounge around and chase up sound clips to use.
So any way see what you think, here is the first 'edited' clip of South Coast Rail.
Posted by South Coast Rail at 13.7.10 4 comments: 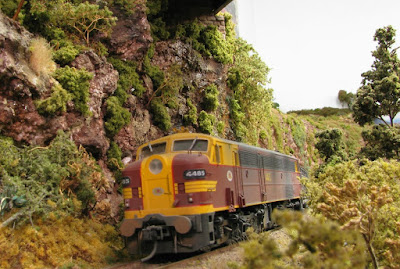 Too soon Sunday night has come again and that means getting on the computer and doing the rounds of the blogs, going onto forums and checking emails.
Once again Sunday night you seem to be able to rely on Craig from 'Craigs Shed' to have updated his blog and let us know what styrene he will need for the next weeks project. He has certainly got a job on his hands to finish his layout. It certainly covers one of the most scenic parts of New South Wales. He is modelling the far North Coast and I'm modelling the far South Coast.
I don't actually like Sunday nights as I know its up for work on Monday morning and its usually into bed round half ten for an early rise the next morning. Friday and Saturday nights are completely different, I stay up till when ever and rise the next morning when ever. (Unless there is something going on). Last weekend I flew to the Sunshine Coast to celebrate my brothers 50th birthday. I had the easy part, he had to come from Perth. Was a great weeeknd away and needless to say not much railroading was done last weekend.
I had actually downloaded my video editing programme during the week and decided to try and understand how it all works on Saturday night. Well Youtube got a bit of a bashing with tutorials and Google put me onto a few other programmes. It was all going well until the dreaded virus has raised its ugly head.
If my car breaks down I call for a mechanic, this time I yelled out for my son who luckily has a nack for fixing these problems. Son, has my machine got a virus protecter on it? Well I thought I had put one on it! So after a lot of fidelling I'm back on track, virus protection now in place and I'm still to get to the video editing programme. Another days adventure. I will be practicing on layout footage rather than the birthday bash footage in case I mess it up.
So not much was achieved on the layout this weekend, but feeling in a photo mood I went down and shot off a few pics. The lightings not what you'd call really bright but sufficient. The down side of this is when I come inside and review the shots on the monitor. Two hiccups. On one shot of a 49 class coming over the gully bridge looked great through the viewfinder, but on screen there were some fine cobwebs hanging off the handrails. No scrap that one. And on another shot of the 44 class coming around a cutting, on the monitor I noticed a black shape besides the track. A quick zoom showed it to be a cooka racha, dead on his back and eyes fixated towards the ceiling. Normally I couldn't see him but on the angle it was taken, he showed up. So thats the second shot you won't be seeing.
Any how a couple of others turned out so I'll put them on. 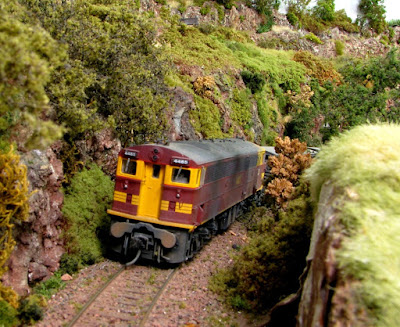 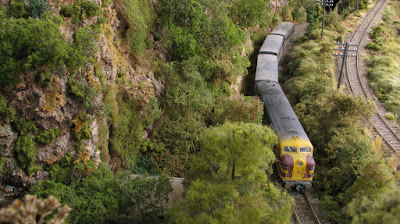 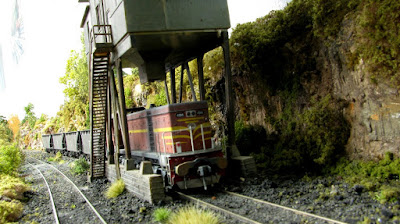 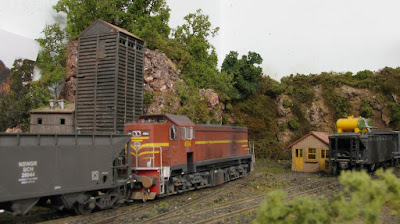 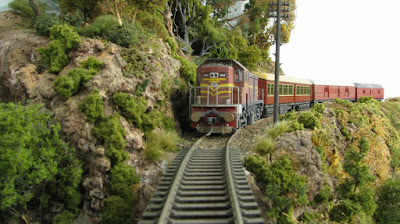