A hole lot better
Sorry to say but for the moment it is all about the hole in the roof. So until I get the hole patched up modelling on the layout is a a standstill. 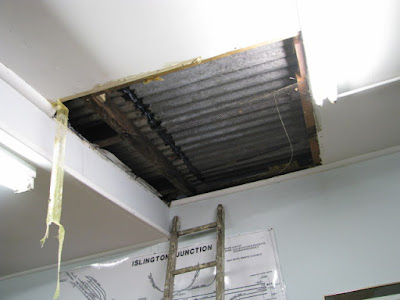 The hole had been cleared of muck and rubbish ready to take the new insulation and gyprock. To get the insulation meant another trip up into the roof of the house. I discovered a leftover pack of batts from yesterday where I had spent an hour or two trying to fix an TV aerial reception problem. (Which I haven't fixed yet).
The batts were poked into place and then the gyprock sheet was cut to my understanding of the measurements required to fill the hole. It was a sizeable piece to get up into position and my helpers? were either glued to the telly or the computer.
Anyhow I had watched plenty of shows from Asia and Africa where huge loads were chucked onto the head and off they would go. It didn't seem hard to do and they always seemed to smile for the camera when photographed.
I had no choice, so I headed for the ladder with this big gyprock hat on my head. Pausing at the foot of the ladder to remember if I had taken my blood pressure tablet that morning, I then proceeded up the ladder. Luckily a piece of quad was still in place to receive one end of the gyprock and another small but critical piece allowed me to rest it up there so I could go down and get the drill.
So after whacking in around 30 odd screws I could then get to work with some gap filler and move a step closer to finishing off the roof. Hopefully soon this blog will have some more interesting things other than roof blogs.
So here the last shot of the roof I will share with you (yeah you say) of the nearly completed roof fix. A bit of paint and back into the layout. 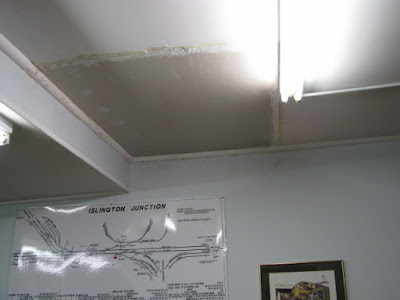 Slow Progress
Saturday afternoon I decided I had better tackle the mess my pre-resident rat had left me. What I needed to do was to cut away the gyprock and dispose of the rat poop. A stratgically placed plastic xmas table top cover was spread out over the layout to hopefully capture all that would fall from above.
I began slowly breaking bits off hoping not to cause an avalanche of crap raining down on the layout. Try as hard as I could it was inevitable that some rat poo would go not where I wanted it to go. I think some went down the back of my shirt but I went on underturd.
I was feeling guilty about doing this work today as it was an spur of the moment descision and as I hadn't got changed, I wondered as I made my way back inside if the wife would notice odd stains or an unusual smell about me. Fortunately all was well. I finally got to see Slum Dog Millionaire that night as a better choice that removing more poop.

Sunday afternoon and after having lunch, I returned to the shed for more work. (I knew I had till 4.opm to get back to watch Sunday afternoon footy). When I got to the worksite, there it was more bloody water on the ground. This time I could see where it was getting in from and armed with my tin of trusty bitumen sticky stuff I returned to the roof. I reckon you will be able to see the black stuff on my roof from space soon.
The last of the old gyprock was removed and one final avalanche of poop came down. I collected all this crap and took it outside and spread it amongst the garden. I reckon I should get something good out of all this bad. Going up the ladder with my tin of black sticky goo I then commenced to spread it into the interior joins of the roofing. This was all OK until I noticed that the black gooey was then dripping down onto the floor and some on the layout. I'll get back to you on whether this stuff makes good track weathering or not soon. Rubbing it with turps got most of it off the track but the bit on the floor can wait till next weekend.
A few extra bits of timber were nailed up ready to receive the gyprock next weekend. And guess what? I have just heard it will be raining again next weekend...........
Posted by South Coast Rail at 21.6.09 1 comment:

Well what started off with a war on the rat in the ceiling some time ago (I eventually won that war with Ratsak) was lost this week when I also had Mother Nature plotting against me.

The rats had decided that between the gyprock and the corrugated iron roof it would be a good place to set up home. Who could blame them, plenty of fiberglass insulation (3.5R at that) and they had a dream home. If they hadn’t been so stupid and scratched around up there when I was down below, I may never known they were there. Thats how dumb they were.

After many packets of Ratsak, I eventually found the dried out remains of a rat some distance from the shed. I suspected it was the ‘railway rat’. Good all gone.

So after many more trains had circled the layout without that annoying scratching sound above I thought “ beauty I’ve beaten you buggers”. But I think they had the last laugh.

After a while slowly at first an amazing fungal growth had appeared on the ceiling where the rats abode was. What the heck I said, stuff it I’ll paint over it and that will be that. But no, the fungal growth grew back and started growing.

It was something David Attenborough could have done a documentary on. It had many colours and different shapes, quite pretty some of it.

Shite, there must be more to this, the rats gone so where was this coming from. And as we all know the east coast has had its good share of rain recently. I alluded to this problem in the last post about the water and after closing the door last Sunday night a small crack had appeared.

Well I opened the door today and was greeted with this: 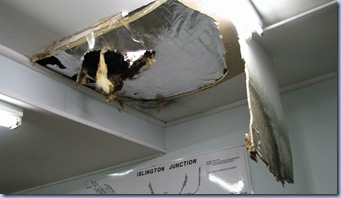 The water which had found its way in yet again had combined with the previous residents bowel wastes and had come crashing down on the floor and layout. I was most disgusted to find out that rats are too lazy to go and do their toiletries outside. Its not as if they had far to go. No more than a metre and what a nice smelling house they could of had instead of one that smelt like a dunny.

As can be seen from the shot below my favourite seat had copped some of the fallout and thankfully the controller (more importantly the controller knob) was missed completely. I’ll never be the same again on that seat. 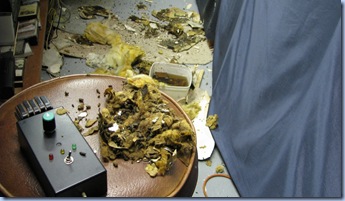 Now the real scary bit when I opened the door was when I saw a bit of gyprock dangling down just like a guilloutine blade ready to cut my son’s only loco NR23 in half or worse. It was Murphys law, it just happened to be down at Batemans Bay when it nearly become history. 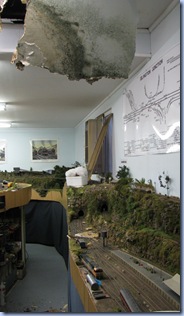 Well most of the floor mess has been cleaned up and tomorrow I am going to try and clean the rest of the roof up. It will mean cutting it out and replacing with more gyprock, painting and generally wasting more modelling time.

I went up onto the roof also today armed with a tin of black gooey stuff and yet again have gone over all the possible places I can think of that the water is getting in. I’ll need reinforcing up there to carry the weight of it all.

Anyhow thats the bad news for today, the good news is that Manly finally won another football match tonight and Monday I’ll go down to the Epping Model railway exhibition.

I’ll leave the final word for the boys from Bega loco who came across the rubble before I had had a chance to clean it up. 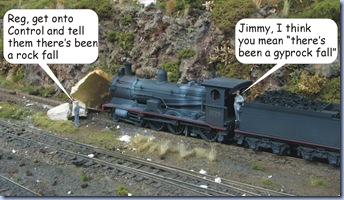