Going Around the bend

Yes slow progress but in the last week I have well and truly gone around the bend!  I have finally laid the track around the Snug Cove area and up to the end of the next two baseboards.
The cork underlay has been used mainly to form a shoulder for the ballast rather than for sound deadening properties. In the yards and on the siding in the picture the track is laid directly to the baseboard as this is how yards are, usually no ballast and no shoulder.
The droppers have been soldered on ready for hooking up to the dcc bus once it turns up. You know buses have a reputation for running late, well at least here in Sydney. I am using the wire in tube method for operating points. I figure if you are going to walk with your train, then the point will be right in front of you. Very cost effective.
I also need to install the micro switches to control the frog polarity, these have worked well so far at Eden.
In the above photo the NQR is at the end of the private siding, the elevation the track climbs is shown as well. The point sits at the end of the baseboard right on the join. The tracks have also been slightly superelevated on the curved tracks. They haven't been tested under power as yet, so hopefully it will all work okay.
The bit of white foam sticking up is covering the end of the point throw rod, I'm sure without it I would have been stabbed with it. Must have the OH & S in place.
The above photos shows some greenery appearing. Trust me I didn't put it there, we have so much rain the last month here in Sydney and now the tail end of Cyclone Debbie giving us a lashing that I reckon the greenery has just grown from all the moisture in the air. Doesn't it look better already?
The blackboy (or if you want to be pc = a grasstree) was a Modellers Warehouse product I got from Dave at the Forestville Model exhibition early this month.
Trust me, making baseboards, laying track, wiring etc is the most boring bit in modelling but has to be done in that order before the best part, the scenery can be done. That's what brings a layout to life. So you will have to put up with that for a little while longer.
I still have to complete the curved point and fit the throwbar and also make it electrically okay. Once that is done then the microswitches have to be fitted and then a hook up to the bus and we will be ready for testing the first train under power.

It has been quite a while since the old HO layout has been around and it was a really enjoyable time and many an operating session was held.
Part of the sadness is diminished when you are able to look back on the many of photos taken while in construction and operation.
A collection of some of the better shots still exist here on this Flickr site: South Coast Rail HO
Older posts herein will cover more photos and the trials and tribulations of the building the HO layout. (The possum is now gone)
Please enjoy what was, we now move on to a new world and to see if I can improve on the former.
Until then, happy modelling!

A Point to be made

It was my own fault that I chose a curved point to build for a siding on the outskirts of Eden. The siding sits inside a 180 degree plus curve and will take around two wagons at the dock. My last workout on a set of points as explained in the post of February 18 was way back in my N scale days in the early 80's. Not having anything written down from the past episodes of point building I decided to bite the bullet and get on with making a curved point.
I needed printed circuit board (which is the usual medium for point building) and also some wooden sleepers. So I made a trip out to the Model Railroad Craftsman at Blacktown for some supplies. As I am using the Peco Narrow gauge track I even remembered to take a sample sleeper with me so that I could size it against what was available. I grabbed some Clover House copper sleepers and had to resort to some stripwood as they were out of wooden narrow gauge sleepers. In the end I just used the copper sleepers. A few other things were purchased there (as you do) and I headed home. I would vote this shop one of the best set out hobby shops in Sydney with plenty of various items, well suited for the scratch builder. (Are there any left?)
As I am using cork underlay on the main line section of track, I felt I needed something solid under the point, so I cut out some MDF to put the point on. It was prepainted in case it swelled up when I get to lay the ballast. I used a section of flex track to make the above point. The rails formed the outside tracks and then I used another piece of rail to make the frog section. So far so good, but even at this stage you can only test the track up to the frog with a bogie. Although there is a bit of slop in a bogie I used a NMRA track gauge to test the clearances. I actually had two track gauges when I was in HO but I think I sold them off. Even if I still have them I would never find them in the shed.
Well after a week or so I finally got close to finishing the point. It is laid on a 30" curve as can be seen by the nearly invisible track gauge next to the point. Thank goodness for the 30" marking on it, I spend ages looking for it at times, must put a dab of fluorescent paint on it. I still have to put the throwbar on. I also need to cut through the sleepers before I get to test it electronically. Some of the solder (read sodder in USA) needs to be cleaned up as well. But so far so good.
In the above photo can be seen the joins between the two baseboards. It looks ugly now but I will cover it all up with ballast. As explained earlier I am building this part of the layout so that it can be taken apart and removed in the future. There is no point in demolishing a layout in the future when a little time taken now can avoid that issue. The point in the foreground will eventually head across a section near the door. For another day.
I am quite happy with how it is going so far. For narrow gauge the main track out of town on a 30" radius curve looks good. Even though there will be tighter curves elsewhere, this broad curve looks the part. One of the often asked questions in narrow gauge is "What is the minimum radius curve I can get my locos and rolling stock around?" I will never ask that question for my layout. I suppose I am not running 4 wheeled locos and rolling stock. Besides I don't have any empty biscuit tins that need filling with a layout. Pointless those types of layouts. 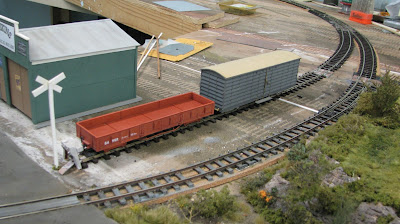 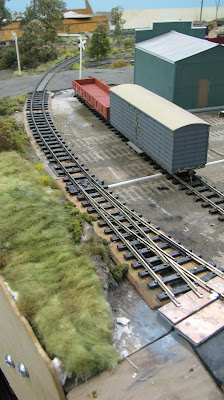 Well I am happy with the progress so far. It has been slow but rewarding when I can see the progress made from this time last year. I'm sorry that the photos are just of general track laying and other construction, but I am looking forward to the scenery component, the bit that brings the layout to life.
Tomorrow I will be receiving a pack of goodies from Ian Lindsay models to further enhance the layout. With a pelican amongst other things, I might have to model some water for him around the Snug Cove area.
Till next time, enjoy your hobby.
Posted by South Coast Rail at 20.3.17 2 comments:

Well after conducting successful loads trials from the last post, it was time to get the saw out and start into the next baseboard. It would be so easy to have laid a straight line as the load trials were conducted but it would have no character. So I made a squiggle in pencil on the board for the track to follow. The track from the first baseboard joins the second at right angles. This is a no brainer for future times when they might need to come apart and rejoin. A Y turnout will be laid up to the join. One track forms the main line and the other leads to the coal siding.
The track is still on a rising grade from the adjacent board, the rise gentle enough so as not to restrict loads by steep sections. This may happen further around the layout.
Although my collection of pineboard seems to be growing I bit the bullet and purchased two 2.4m x 1.2m ply. Hopefully this will be stable enough to outlast me. When planning this section, I stared at this board for quite a while before I committed to pencil the route of the track. I wanted to incorporate either a creek or just a gully on the board and as can be seen in the photo a section was cut out and set in at a lower position.
There is no 'undo' button once you commit the jigsaw into cutting. 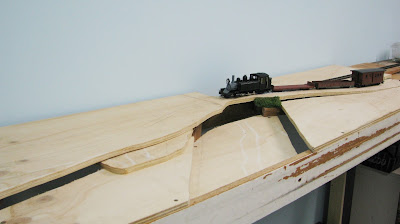 I assume this style of baseboard could be labelled the 'cookie cutter' style but it differs from some I have seen in that I use the whole width of the sheet and just raise or lower the board either side of the track roadbed. Using this system allow you to have a solid base for adding the scenery to. Some modellers I have seen just use the roadbed for the track and then have to come back and fill in around the track, which to me would seem more complicated. Each to their own.
I have still stuck with the 30" radius track on the two boards as it looks OK. I figure that if I need a tighter radius then all my stock will run around it. I think 18" radius would be too tight for my liking.
It is still a hard thing to do just looking at the boards and trying to visualise what scenery will go where. I don't know what will end up on the boards as yet.
The photo above shows where the Y point from the first baseboard will lead onto the next board. The siding was going to be too short to have two wagons in it so I extended the track base onto the next board. It looks rough as at the moment but it is great what you can hide under scenery, ballast etc. The building for the siding will go behind the red wagon. (one day?) The baseboards are 50cm wide at this point along the wall. It is still amazing to me how quickly O scale modelling seems to gobble up space.
The next item on the work schedule is to start making the curved turnout that was shown in the last post. Once this is in place then the track can start to be laid onto the baseboards.
The next board in the corner will feature a timber trestle based on the Monbulk trestle like the one in the photo below. 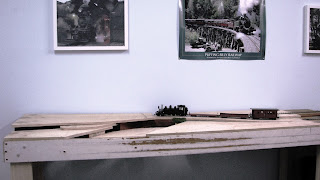 In the meantime I will be doing some carpentry study, especially those tortoise and tenon joints.
Posted by South Coast Rail at 11.3.17 2 comments: