The Candelo Branch
I suppose model railways can fall into two main categories: Prototype or freelance.
When we choose 'prototype' we then endeavour to model that locality or location as close to the real thing as possible. This doesn't always work out as sometimes (usually) the space available does not allow a true to scale model to be built. This goes under the heading of selective compression. To model say Goulburn, Cootamundra or Junee to their full scale length would need a very large shed.
So to get around this we can reduce the length of yards, reduce the number of sidings and even leave some features out but the model bears some resemblance of its intended location.
This can be another reason why modelling branch lines can make a better choice as they can make a 'better fit' model.
Another enjoyable part of the hobby picking a real place is the background research required to make the model as close to the original as can be. This then requires further research depending on the era you are modelling. If I was modelling Orange as it now stands, I certainly would not need as much track and points if I was modelling it back around the 1950's. Darren from Gunnedah and Beyond has touched on this issue on some of his earlier blog pages.

The second category 'freelance' is where South Coast Rail fits in. I think in my first ever blog post I may of mentioned that the Illawarra section of the line down towards Bomaderry appealed to me. I have always thought a layout based on Bombo, Kiama, Gerringong, Berry and Bomaderry would be ideal. My shed was large enough to fit it all in but I didn't want to be restricted in being chained to operating like the prototype and I also preferred the continuous style of layout.

So keeping in the South Coast region, the next best thing was to pull out a road map of New South Wales and pick out a few towns that were recognisable. This lead to me saying Bodalla, Batemans Bay, Narooma and Bega yes you'll do. It was that simple. I now had complete flexibility in station and yard design as we all know there ain't no railway there now and never will be. I now have a justification in running the Bega Mail and operating my sleeping cars. Something I would have felt guilty doing if I modelled north of Bomaderry.

Another famous ficticional line amongst bloggers is Bylong Ray has also chosen to be completely free of prototype design. (Although I believe now there is an actual Bylong crossing loop been built on the Ulan line.)

I also wanted a branch line as I enjoy this type of operation knowing I can only go to the end and then have to come back to the junction. (Many happy returns!) This was also a good place to put a coal mine as it would mean more operation/shunting. Again the road map came out and as this branch was to come off at Bega, a quick look found the towns of Kameruka and Candelo as suitable branch stations. One thing that wasn't available when I originally developed the stations for the layout in 1999 was Google Earth. From 2005 we were able to fly over landscapes and get a first hand look at what was down there. This is also a great tool for modellers of any location.

Another great app that is provided on Google Earth is the 'street view' option. Using this I was able to tour up and down the streets of Candelo without travelling the 485 kilometres to see it in the flesh. There are many old buildings typical of country towns that would look great on the layout, but the lack of room at Candelo on my layout will prevent this from happening.

Having picked out the two stations of Candelo and Kameruka, I rather belated decided to check the internet to get some background on these places.

CANDELOSo that's a bit of background on the two stations currently on the Candelo branch. I found that I could sneek another small platform in on the line. So I went back to Google Earth and there were two contenders between Kameruka and Bega. One is a locality called Kingswood and the other Black Range. I have chosen Black Range as I don't want a phone call from Ted Bullpit saying " Your'e not modelling the Kingswood, its mine I have already taken it" So Black Range it will be.

So thats a bit of the background to the Candelo branch. Sorry for the lack of photos. I don't have any cow photos to support my modelling.

Don't you think picking Bodalla, Kameruka and Bega for station names is a bit Krafty?
Posted by South Coast Rail at 30.1.11 1 comment:

Kameruka
Lately I've been hanging around Bodalla too long doing work on the cliff behind the station and goods yard. There is only so much scenery work you can do before boredom sets in.
I needed a new challenge. Where can I go next in the room? I weakened on my resolve to finish an area before moving on to another.
The next challenge was going to be an area that wouldn't take forever to finish (famous last words).
So it was that I decided to concentrate on Kameruka. It is a crossing loop station on the branch to the terminus at Candelo and also represents the highest point on the layout. I figured it would give short visitors an eyeballs view of the wheels of the trains. This height was not scientifically devised but the need to fall slightly below a window set its height. Once the track leaves here towards Candelo there is a down grade. None of my grades on the entire layout are steep due to the fact I have plenty of length to make them gradual. Even the grade down to Candelo is only slight. In fact a Trainorama 49 class can haul 16 loaded BCH hoppers + Brakevan out of Candelo to Kameruka. From Kameruka to Bega it is all down hill.
This is where operation working can rule over reality. Bank engine working can be introduced between the two stations there by making for more interesting operation.
Kameruka has been laid with code 100 track. It has been my intention to replace the code 100 with code 75 when ever I do a relay at major stations. Much of the initial track was second hand and has served well. I find the code 75 track is a close to real track I need to go without taking the next step which is hand laying track.
Back yonks ago when I was modelling N scale I was making a layout with handlaid track. It had code 55 rail imported from the US. This layout had well over 40 handlaid points including a single slip and a few diamond crossings. It was at the time when I decided to change scales from N to HO as there were improved NSW type models coming onto the market. All this track was built when I didn't have space for a layout but had plenty of time to construct the track. Now it is the opposite. I don't have the time to build the track but enough spondooly to buy the points.
The next issue was to work out the track layout for the revised Kameruka. Originally this station was the only crossing loop on the branch and the loop was of sufficient length to take branch length trains. (even to restricting the coal train lengths). Some time ago I found that I could make better use of this line by installing a lifting track between the branch and Bega which luckily were on a similar level. The only other issue with the loop was to lengthen it as longer trains from the main line were now crossing there. 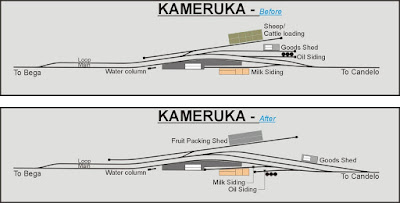 The opportunity to dig up the track gave me a chance to review the current set out of sidings. I wanted enough industries there to allow shunting in both directions. The current set up had the goods shed on a dead end siding of which I cannot relate to any examples on the NSWR system. This was resolved by continuing the track on as a loop to reconnect with the branch. This means the goods siding can now be shunted in each direction. Unfortunately the sheep/cattle race has got the flick. Two good reasons. (1) I would have to build them and (2) I had a building that can be made up to represent a packing house.
With the extension of the goods siding this meant the oil siding had to go from its current location and I found I could shoehorn it in over near the milk siding. The milk and oil siding trail from Bega, that is they are a straight shunt in the Down direction, so in the reverse there is more shunting required to return them towards Bega. The beauty of oil sidings is that they only need to be a bit more than two tankers in length. I was originally going to have the oil siding come off the milk siding but the clearances were too tight. Shunting would also be complicated by needing to move the milk wagons prior to shunting in the oil tankers. Something I'm sure the milk depot would get the shits with quick (But interesting for the operator). By regigging (wow 4 G's in that word) it I was now able to fit in three oil tankers.
So after settling on the final layout and checking out the stock of track and points on hand I found out I needed another three long right hand Peco points. I tried the closest hobby shop on the phone and they did not stock them but were willing to order them in. I thanked them, said no and then remembered I had gotten some previous supplies from the Model Craftsman at Blacktown and had good service. It was Wednesday around 2pm and I rang the shop. Gary answered, had what I wanted and put it in an overnight delivery bag. And on Thursday morning I had my points ready to continue work on the layout. So for $9, much cheaper than the petrol I would have used and about three hours saved by not going there. The only real loser would have been Gary in the fact I probably would have bought other stuff there as well. Well recommended.
So at this stage the branch is out of service until the new track is laid in.
...........To be continued when more track is laid in.
Posted by South Coast Rail at 21.1.11 2 comments: