Picnic Day
Yesterday was the work picnic day. My days of heading out to the area of Sydney that is always hotter than anywhere else at Penrith (west of Sydney) are thankfully over. The kids used to enjoy going there but now I am able to dedicate the day for me.
The past few years I have had Bruce (the plate man from previous thread below) come up and have a running afternoon. He has a huge range of locos to choose from and has chosen Norfolk and Western as his main American interest railroad. I had my first listen of a sound loco when he brought up an N & W 'A' class engine. This was a huge loco and we soon found out my NSWGR tunnel portals were certainly smaller than the locos outline. I am sure with the size and weight of this loco if we had a run up to the tunnel it would have managed to get to the other side and reprofiled the loading gauge at the same time, but i declined the offer. So it was relegated to a long straight stretch all day.
On the day he brought up two Delaware and Hudson RS11's on their maiden runs. After having a few laps aound the layout I suggested we give them a run up to Candelo and then up to the mine for loading.
A coalie with 20 BCH's and a brakevan was already down in Bega yard so the locos backed on and set off for Candelo. They took the branch at Bega South Junction and then started the climb. After taking the loop at Kameruka, controllers were swapped over so it was easier to drive and shunt near Candelo.

Now just to make things interesting at Candelo there was already a train of 5 BCH's in the siding and 7 BCH's up on the mine branch. This then gave a total of 32 BCH's at Candelo and the mine to be loaded.
When you look at the track design for Candelo it is not a generic NSWGR style. I tried to design a bit of mongrel into it to make it more interesting for the operator. We were lucky this day as there were no passenger trains wanting to interupt our shunting and the goods yard was fairly empty allowing a bit more room to shove loaded coal hoppers.
Well for the next hour or so we went through the motions to get rakes of 9 BCH's and a van at a time to the mine for loading. Three kadee magnets up there allow for the loco to uncouple from the train, then run round. The next magnet at the rear of the train uncouples the brake van which is then placed into the run round road. The loco returns to the train, pushes through the loader and when done shunts the train over to the runround road and reattaches the brakevan. This then taken down to Candelo and then the next chess move takes place. The loaded hoppers are stored 'somewhere' down at Candelo and the sequence is repeated another three times until all hoppers are loaded. 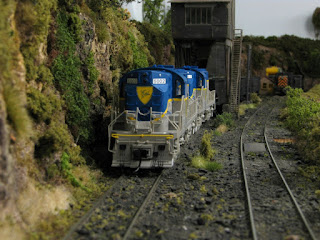 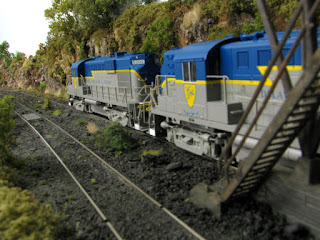 RS'11 ABOUT TO HEAD FOR CANDELO
I won't describe the next 72 odd moves that were needed to get the 32 hoppers, brakevan at the rear and the two locos at the front of the train, but it was an enjoyable waste of time. Run round moves had to be carefully planned to leave a track clear for running around. In the end four portions were on different roads and then combined into the one big train. This is the part of the layout I enjoy. 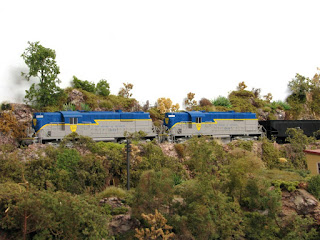 The layout has also been designed for differing aspects of running trains:
It was a great afternoons running and after a break and a bit of dinner, part two of the day happened when we had another later running session with Bob and Andrew. At least everything seemed to be working OK.
One of the train we ran that night was a pristine 47 class and eight new CH coal hoppers. And again after doing a couple of laps of the layout where else to go but back to the coal mine? 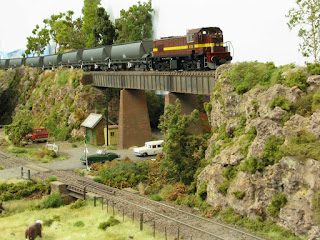 The CH hoppers are really nice models with detailed pipework, their only downside being their cost. The sound of the clickety click of new clean wheels on track joints sounds great.
When the train got to Candelo a decision was made to run the complete train to the mine for loading, but because these hoppers are longer than BCH's the runround couldn't be done.

Not to be outdone Bob brought up his newly assembled and painted NA. This was an On2.5 model so track was carefully selected to allow clearances for overhang. Unfortunatly it didn't go and after removing the top it was discovered a loose contact pickup wire had come adrift. It was decided to fix the problem later and just posed for a few photos. And so ended an enjoyable day. 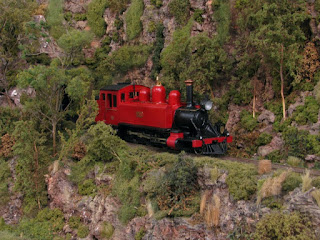