While work continues on the layout as covid decrees, I have been taking photos all the time recording the growth of South Coast Rail in its narrow gauge format.

Some pics out of focus are deleted straight away (the beauty of digital!), some just make it into the various folders and some just turn out right. Another great feature of the digital age is the ability to instantly turn a colour photo into a black and white one. Then the photo takes on a different feel, maybe taking me back to the days when black and white was all you could afford.

I have managed to run through a selection of colour photos and converted them to black and white. No labels attached, if you have been following the blog you may know where they were taken. 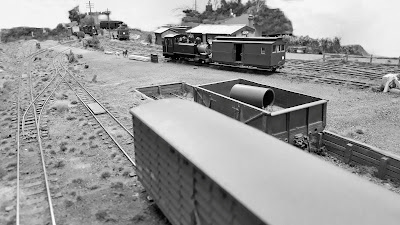 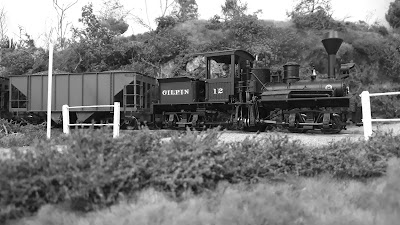 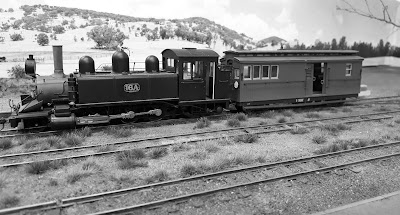 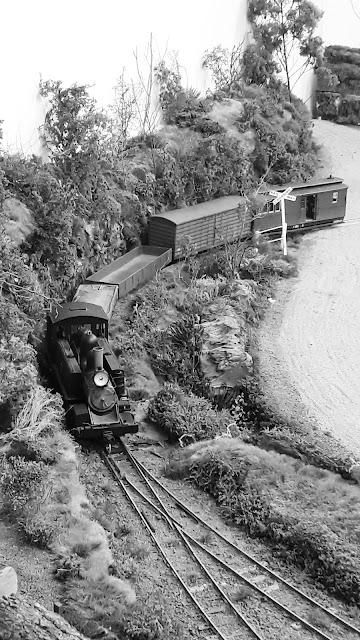 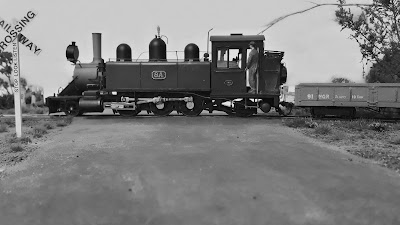 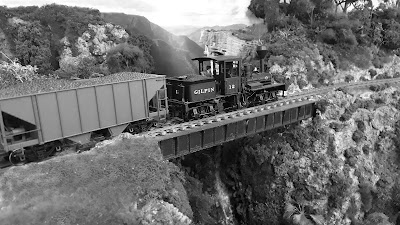 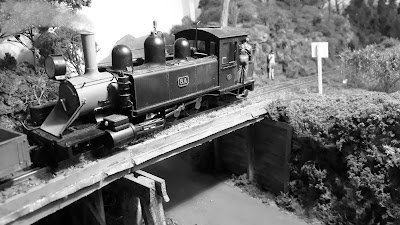 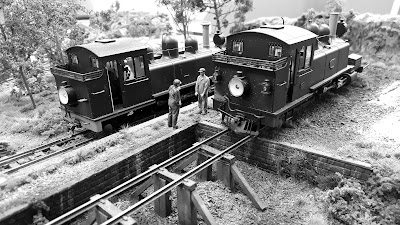 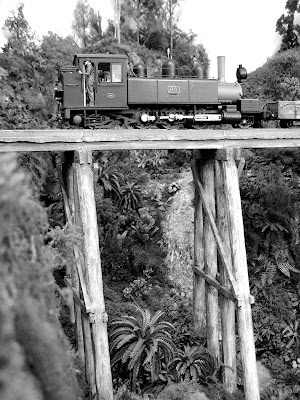 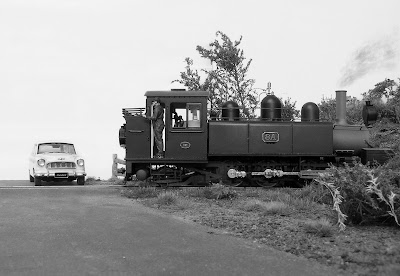 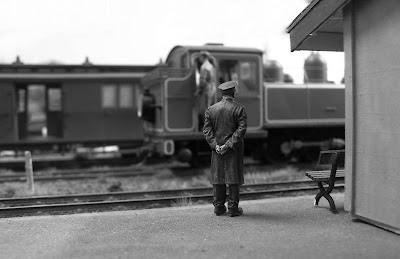 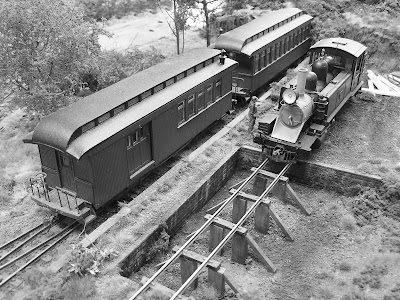 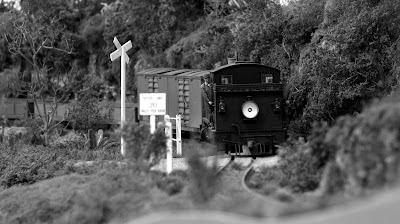 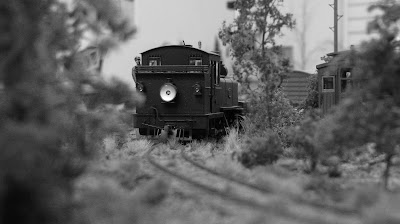 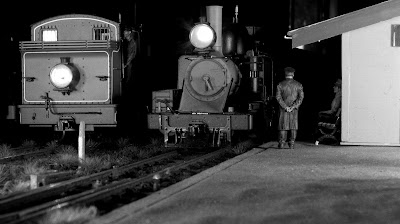 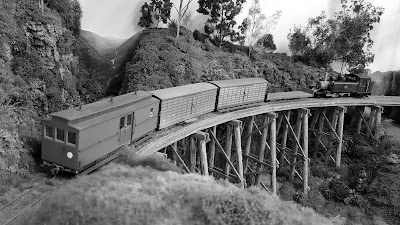 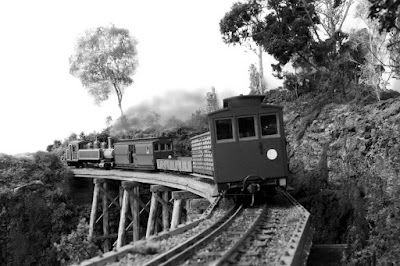 You would actually think that my model of the Thomson River bridge would have been up and running by now knowing that I have started on it around three years ago. It probably would have been finished if that was all I was working on. But there has been a lot of other things going on both inside and outside of the shed.

I have got to the stage where I needed to concentrate on just the bridge module. On reflection I sometimes wonder why I decided to tackle the project in the first place. Although modelling the fictitious  South coast of New South Wales and the Thomson River was not in that region, I figured I need a focal point in the room. I had no plans, no photos only a few pictures in books that I was slowly acquiring. Yeah looked a challenge so the baseboards were made, long enough to accommodate a model of the bridge that works out around 1.90 metres long. 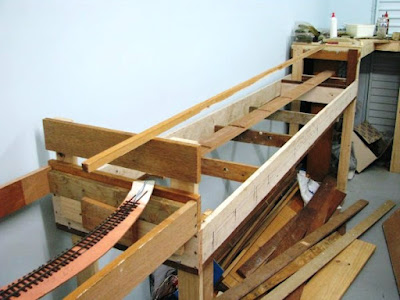 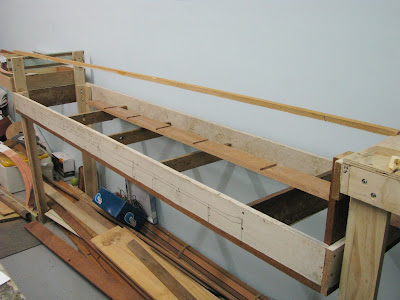 So after all these years things have been moving forward especially with some help from a few friends. Without their input the end result may not have come out well. Initially knowing that the end product would be some time off I added a temporary track around the site where the bridge would go so I would be able to have some operation around the work site.The bridge is constructed on a full length of aluminium channel that provides a solid base to be able to glue the bridges side to. So the top is done, the sides finished and countless nut and bolt casting put into place. The normal viewing angle will be looking down so under normal times the underneath will not be viewed. I could have just left it at that but I thought what if photos are taken underneath looking up and the aluminium channel is visible?

So even though it was going to be a long job to fabricate underbridge detail, I felt the time devoted to it would be worth it in the end. Now to make matters worse as I have eluded to in previous posts, although I have a set of plans, they are virtually indecipherable. I only had a few shots taken under the bridge but only on the end nearest the current Thomson station. So what I have ended up with is basic supports that will look the part when and if viewed upwards. I think once it is settled into the scenery the underneath won't be visible anyway.

The whole bridge was easy to flip over to allow work to be done. The full length can be seen in the above photo. It was just a matter of fabricating another channel of styrene to fit inside the aluminium one. It took a while but a small part of the brain said don't worry if it isn't a 100% job as most will never be seen once installed. Eventually I had worked my way across and installed the cross braces all done in styrene which is an easy material to work with.

Once the parts had been made for both sides it was then time for painting and weathering. First coat was a hit from Tamiya rattle can primer and then a darker grey to represent the steel work. I could have left the bridge brand new like when it first opened but I though it would look better weathered. Not having done much weathering in the past I had a go using a combination of various colours and a rust finish done with a rust paint and also by scraping some rust coloured chalk onto fresh isopryl alcohol. The end result I was happy with, so these photos might be the first and last time the underneath are viewed.


So basically the top and bottom have been done, just a few more pieces to be glued up and then the bridge can be turned over for the last time and fixed into place. More on that next time.