2020 and our first 'train day' was due today. As per usual it always seems to rain on these days and today was no exception. We gathered over on the northern beaches of Sydney an area reknown for its famous rugby league team although kickoff is around another month away.
Phil has the ultimate train room situated under the house in a former garage that now exists in its final format. Beautifully presented with bright lighting, blue painted walls and finished off with some great photos of the northern line and well made finished off baseboards and complete with black curtain valance. What a man cave.
Various trains circled the layout representing trains of the bygone steam era. Coal trains are the four wheeled variety and BCH coal hoppers hauled by a sound 60 class garratt. No modern container trains found on this layout.
Since our last visit it seems only minor cosmetic changes and detailing has taken place. The amount of detail Phil has put into this layout is fantastic, each area has lots to take in. I particularly like his version of the Wickham Branch which in its day was full of various industrial sidings, a shunters delight. The branch on his layout also doubles up having storage/staging sidings built under.
So after spending some time absorbing the layout we ventured upstairs  for our barbeque lunch, some liquid refreshments, cake and coffee later and then off home in the afternoon traffic.
I'll let the pictures do the talking, another great day with some mates. 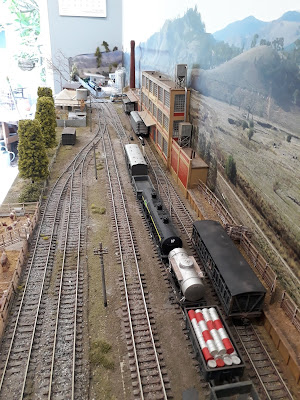 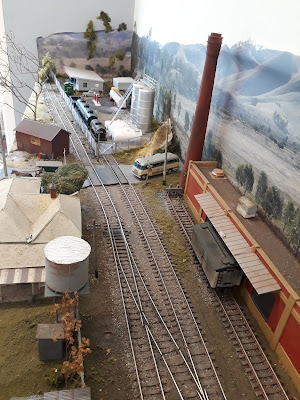 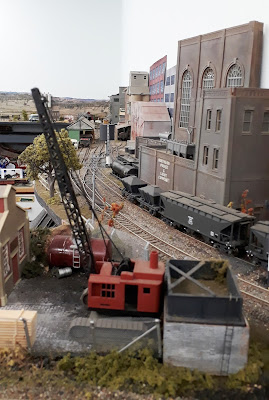 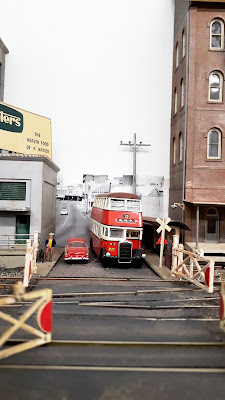 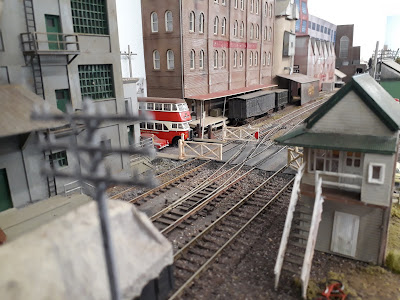 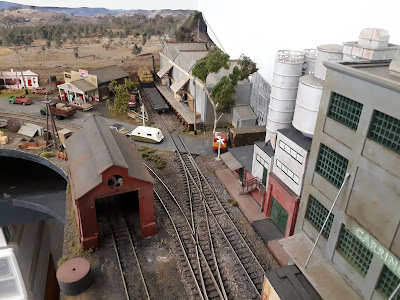 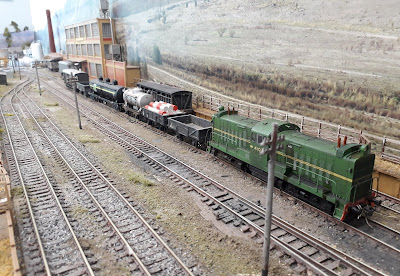 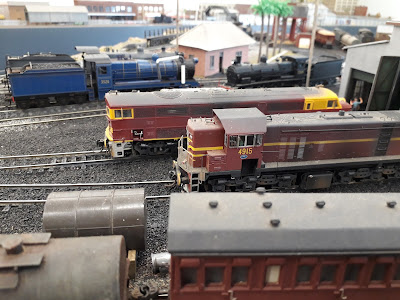 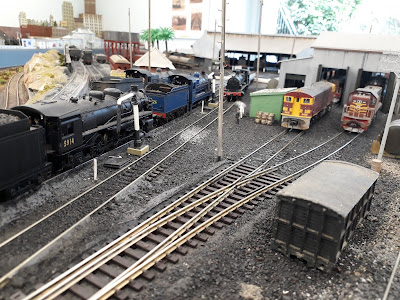 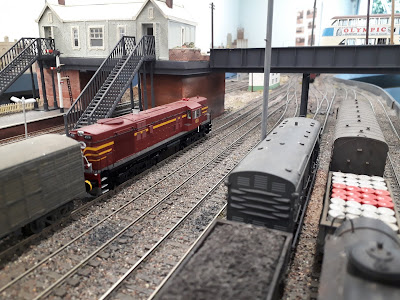 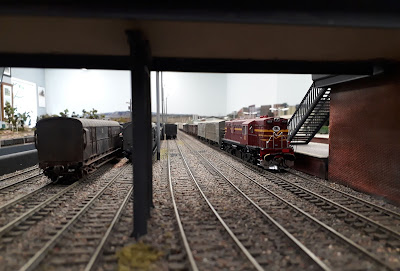 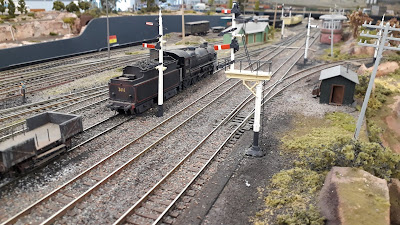 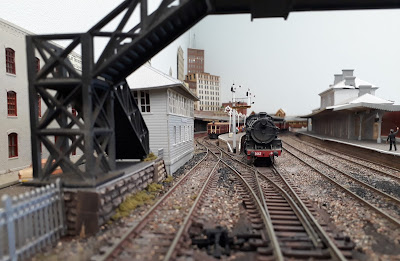 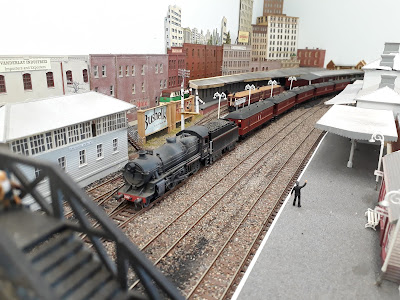 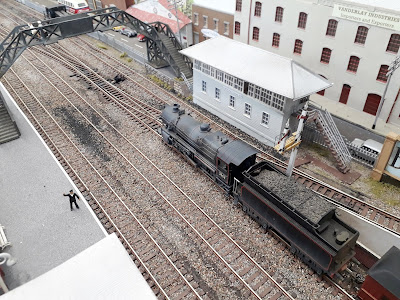 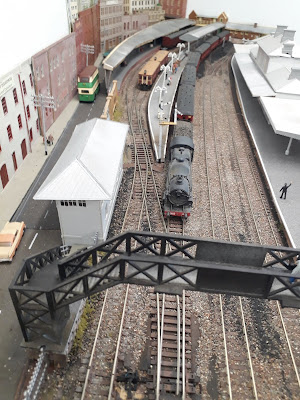 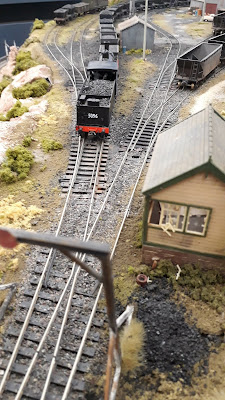 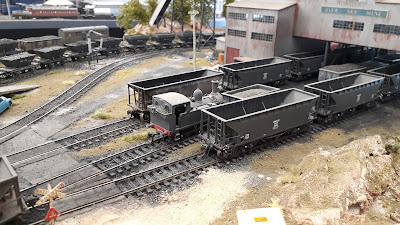 Don't know what happened to January but it is now February and time for my first post for 2020.
As promised I have been continuing with work on the bridge, it is one of those projects that takes a fair bit of time and a lot of repetitious work with the various parts on the bridge structure. You have have to go head down and plough on. Part way through the project I was wondering two things - why did I pick this bridge to model and why did VR make it so long and big? But looking at my progress so far I am pleased that I have tackled this project. The finished bridge will be around 2 metres long this being done in O scale.
Before I decided to go ahead with the build there was a fair bit or research required. An almost essential requirement is a set of plans. An impossible task to go over the real bridge with a measuring tape to draw up plans and why build it if it was only going to be a 'close enough' build.
Through a forum I was able to get a set of plans for the bridge, even though they were unreadable they were a good guide and once a measurement was determined the rest could be scaled from that. The bridge is over 100 years old and I hope my build won't take that long to finish.
The previous bridge blog entry detailed one of the standout features of the bridge that being the concrete piers. These were beautifully made by 3D printing by Roger Johnson and I am in extreme debt to him for making such an accurate model.
What sits on these piers in the middle is a truss section. (pardon me if I don't describe all these parts properly) I had made a drawing up in CorelDraw that was traced over the original and printed off.

This I thought was a good starting point and then came the pondering on how I was going to build this section. To my rescue came Nathan Wakim who saw the drawings and then offered to have the trusses laser cut out. How could I refuse such a great offer? Later on I received a pack of these trusses, may be enough to make three bridges but was actually designed to allow for my stuffups in getting one good section.
I don't think I would ever be able to make the bridge unless I had made two visits to the actual Thomson River bridge and take as many photos as I could jam in the twenty minute stop the train from Walhalla makes. These were invaluable and I often sit in front of the computer and stare at them trying to decide how I would tackle the build. At least this bridge is still standing and accessible.
Looking at the bridge photo above, the most logical way for me to tackle the build was to use two laser cut sections and then insert spacer rods to separate the two sections. This is shown more clearly in the first two photos. As can be seen by my pathetic workbench above, I have an equally pathetic set of tools to make all these models. One would have thought after all my years of modelling I would have had a great set of everything around. But no, I only seem to get tools when absolutely necessary. I counted up how many holes I needed on each side to insert the spacer rods and it was around 40 holes I needed to drill.
The fun began when on the only drill I had, the chuck would not tighten around the fine drills required. I tried a pin vice but this didn't seem to work, it was slow and the tip tended to wander ending up with a second rate job with holes that didn't line up.
So after some research and deciding life is too short to scrimp and save, I headed off to Bunnings Hardware and purchased a Dremel drill and a drill stand. Initial outlay seemed a fair bit but when I got to use it, it made the job so easy. Even if it never drills another set of holes in  its lifetime, it has done well with the bridge. Most of the 40 holes were done by eye and even allowing for the fact that I wear glasses, I was happy with the end result.
What I did was to glue two side pieces together and then drill through the two pieces. Then one piece was matched up another piece that sat behind the front piece. This then allowed a piece of styrene rod to go through the front section and sit on the back section of the truss. I wasn't worried that the rod didn't go through the back section as it would not be visible and I thought this was the best way to do it.
So after the 40 odd rods were inserted the next job was to make the X shaped bits as seen in the prototype photo above. I used styrene strips and then inserted a nut and bolt casting through the middle. This then allowed me a bend point to form the X shape. I made a small jig for this to make it go quicker. These were very fiddly to make and I reckon for every five I made I got three good ones. They usually split where the hole was. Eventually I made fifty six of these and inserted them by a set of tweezers into every spot. I was certainly a slow section of the build. I had nearly got the first side done, got relieved and then remembered I had to do it all over again for the second side!.
Armed with the above photo, I was able to replicate the extra bracing bits and then add rivet decals following the pattern. I obtained two decal sheets of rivets some time ago when I was cruising through an Ebay site. Although they are were bought in the HO days they still work OK but still on the small size. Each sheet had about 20,000 rivets on them lined out in various patterns. Again it was a slow job settling them into position. They were only put on the two sections that would be visible from the aisle. No point wasting time doing the rear side of the bridge where it would not be visible. I actually followed up with some Archer O scale rivet decals ordered on line and it cost around $45 for two sheets that were a lot smaller than the HO ones. When I examined some photos in close up of the rivets, some appeared not to be round but I was  not sure if I had maybe squashed them, anyway once they are painted over they won't be noticed.

Top and bottom plates were also added, this made the truss look complete and solid. Once the second truss was completed then the undercoat primer can be applied.
I bought a can of Tamiya primer and two cans of Tamiya grey for the final coat. One of the greys had a blueish tinge, so I tried at least another two various shades of grey before I was happy with the colour. This results in a 'near new' finish that will need to be weathered down and a hint of rust colour applied. You can see on the above photo that I  needed to have a portion of the aluminium channel removed to allow for the truss to fit up closer to the bridge deck. This was done on Russell Freemans milling machine and a perfect job was produced.
The whole bridge build is a constant juggling of trying to make available material fit and do the job. You hope the end result will end up looking like the real thing. I don't have the tools or skills to do an 'exact' model.
The next job was to make eight "I" channel pieces that fit across the top of the truss. They had to be custom made as there was no applicable Evergreen stryrene shapes. Again they are not perfect but most of them will be hidden by the deck. They were glued to the top of the two side trusses. Another aspect of this bridge is that it is not a straight on bridge, rather the trusses are offset/skewed at an angle along with the piers, but so far so good.
In the photo above you can see that the truss slides into the adjoining bridge section. This is why there was so much pre planning done to make sure it all worked as the build went on. Once the eight channel pieces were glued to the two trusses the structure became more solid. There are further cross bracing pieces required, but I will have to go back to the plan and try decipher what is required. All my photos of the real bridge were taken from the Thomson station side and not possible to get shots showing the cross supports. These won't be visible from the normal viewing level and only when looking up from underneath, so I am not fussed if they are not 100% correct, as long as it holds together.
Well that's where the bridge build is up to at the moment, I think the centre truss was the hardest part of the build so far and consumed quite a few hours to finish. It will all come together one day, so at the moment I am polishing up on how to create rivers on Youtube.
Posted by South Coast Rail at 3.2.20 2 comments: