A day out...
A weather check for yesterday Wednesday said it would be fine and around 25 degrees. Not too bad for an Autumns day. Today was I finally to get to see the Weavering Model Railway.
The trip by train there co-incided with the last day of the Royal Easter Show at Homebush and although the train was eight cars it was necessary to stand as far as Strathfield where the train virtually emptied out.
Arriving at Central we spotted a second bonus for the day where waiting to depart for the Illawarra and places beyond was the Southern Aurora. The triple header train had a 44, 43 and 442 class at the front end and a train of silver carriages, 'spoilt' by just two red car in the consist. 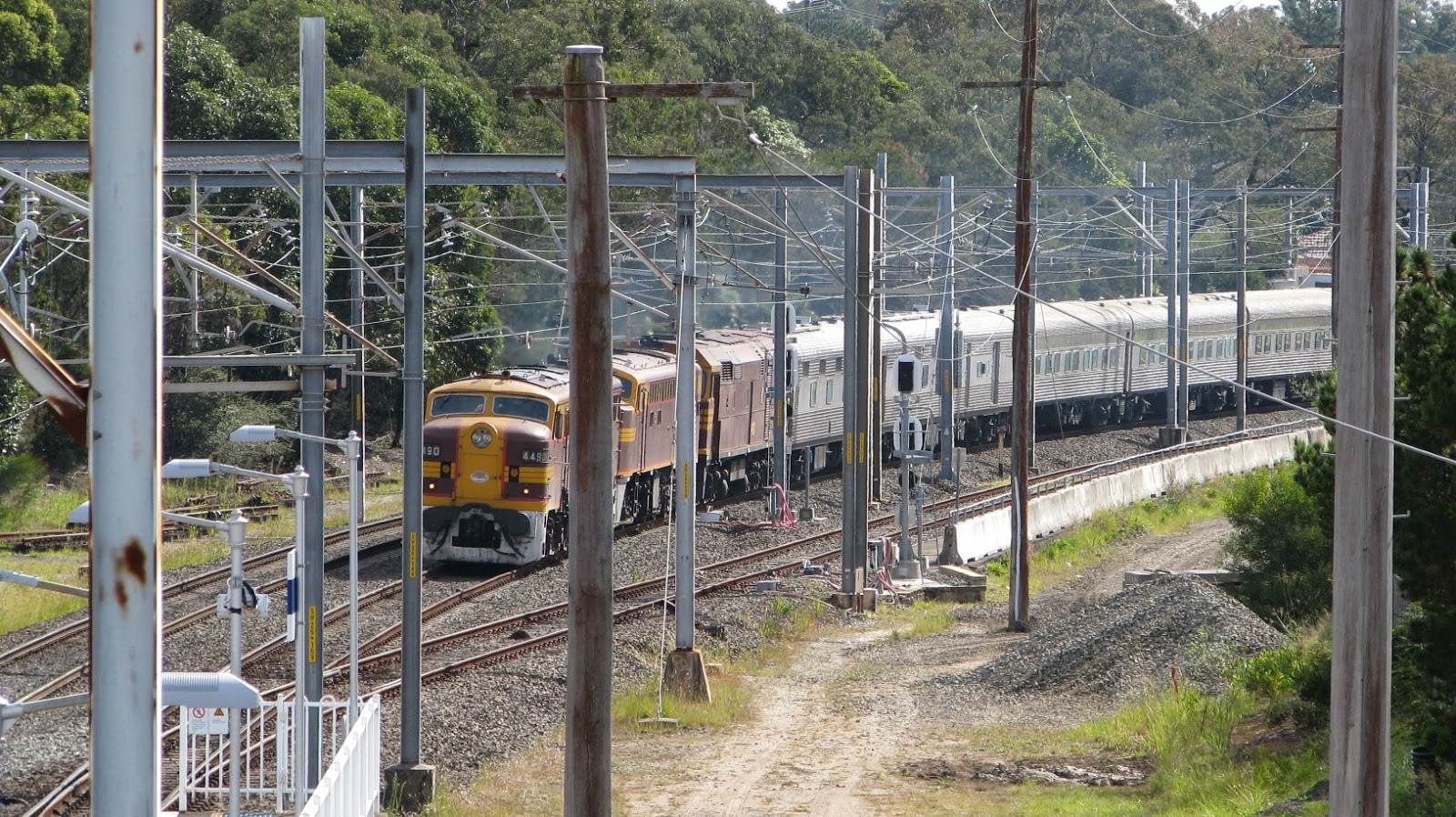 After watching the train head south we went over to the layout for a run. But as things go when you get a group together the chat session usually gets priority. So after an hour or so gas bagging the clock was creeping up towards lunch time and a decision was made to adjourn to the local pub for lunch.
Steaks and schnitzels were had and surprisingly washed down with non alcoholic drinks. Perhaps we all thought we were still employed by the government agency that so strongly prohibited any trace of drink getting anywhere near a set of lips.
Finally into the room and before us was a room that stretched forever it seemed. What was once a single garage of 20' x 13' had recently been extended double now at around 40' long. I guess no matter how long the space is we as modellers can soon fill the space with layout.
Part of the layout was left from the original this being a terminal appropriately called Central. 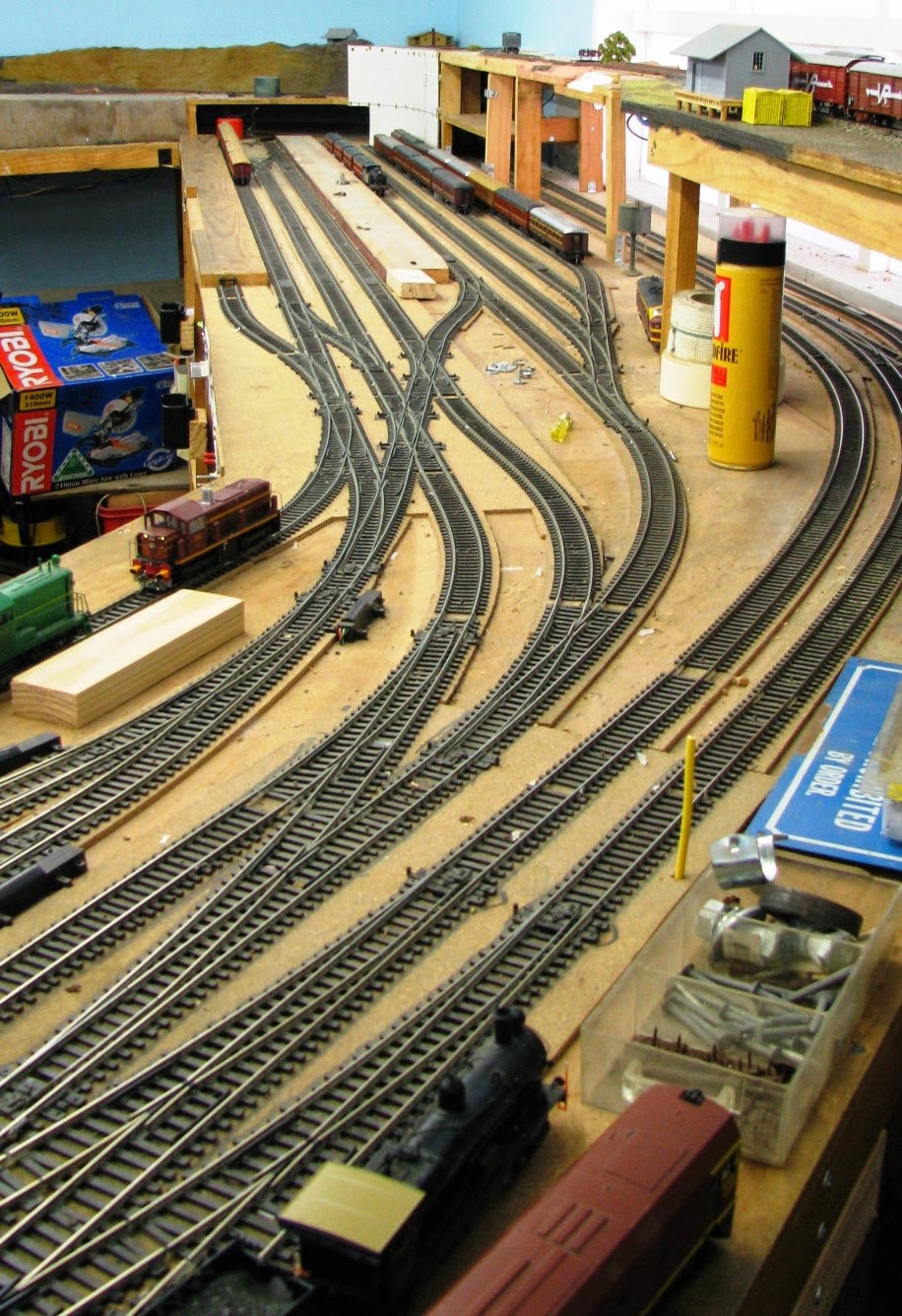 This consisted of three platforms with a middle run round road and adjacent car storage sidings. In the photo the branch line station Wilogobung sits above the tracks. The tracks below the 73 class lead to Macdonaldtown car siding which are shoehorned under another portion of the layout. The track design is cleverly designed so the car sidings are accessible to the three terminal platforms. 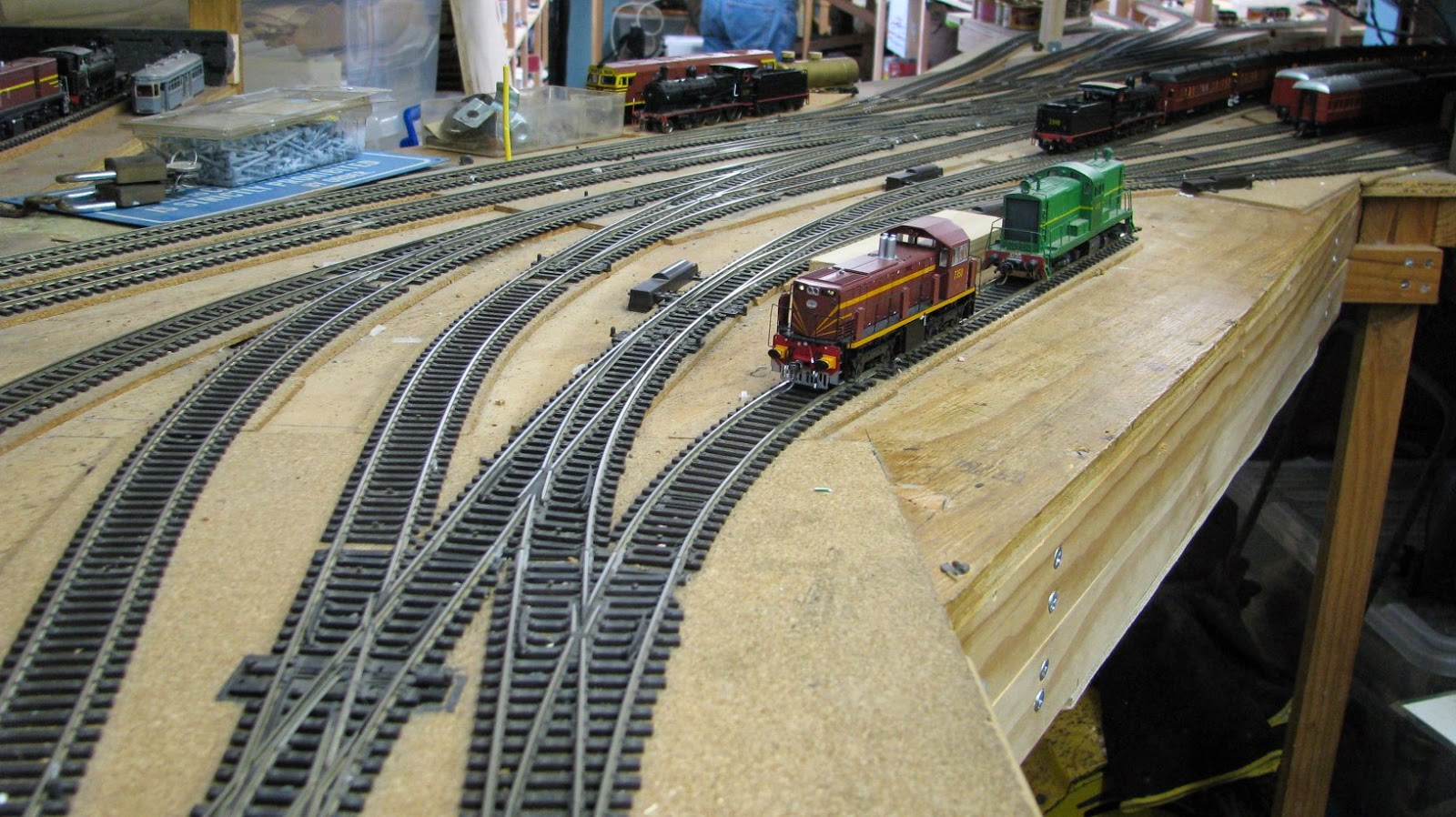 The above shot taken from the opposite direction as the previous shows the junction trackwork. A 32 class is attached to an 8 car LUB set waiting to come into Central for another run. All the points are motorised which makes operation easier.
The owner has changed over to DCC operation from DC. As I am still "old school" with DC I had a few quick lessons on how to get things moving. NCE controllers were used which to my observations seem to be the predominant system in use. Ah maybe one day!
One of the things I was most impressed with was a 422 class fitted with sound. It was just like the real thing. I want one!. I liken the sale of locos without sound to selling motor cars without wheels. Sure make it an option for sound but please make it an option!.

3390 has coupled up to a LUB set and waiting for the road into Central. There are six roads here for carriage storage and all were full. Another bonus with DCC is the ability to have carriage lights on as can be seen above. I must say that it looked most realistic and would have been great to see in the dark. Although wiring and point motors hang down here in the scene, when operating it all seems irrelevant and not a big issue. Code 100 has been used for most of the layout but the branches have been laid with code 75. As the owner states that this delineates where the "big" locos can't run.

The branch line station of Wilogobung with a sound 620 class having just arrived. Basic scenery has been done.

And just for a bit of fun we ran a 59 class on a Spirit of Progress train, although you can't see the blue cars behind the power van.

A 40 class sits on a HUB set ready for another run. I'm not sure that I would have bought a weathered set of these cars. They looked too dirty for my liking, not how I remember them. A coal stage is in the background. This will form part of a new loco area.
Well after a good few hours spent we headed off back to the station on our way home. Thanks to Pete our host for the day and we all really enjoyed seeing your empire.

I was down the local shops recently and slipped into one of those so called "two dollar" shops and had a quick look around. Well they got that wrong with many items now over the magic "two dollars"


I was up aisle two and while I was breathing in so another person could squeeze past I noticed this package on the shelf. It was a small packet with the title "Deckakard" and referred to a "universal levelling system. There were two in a box for $3.99. After I thought about it for a moment I realised that some legs on the layout were not as level as they could be and for a lousy $4, I grabbed them, took them to the cash register and went on my way home. 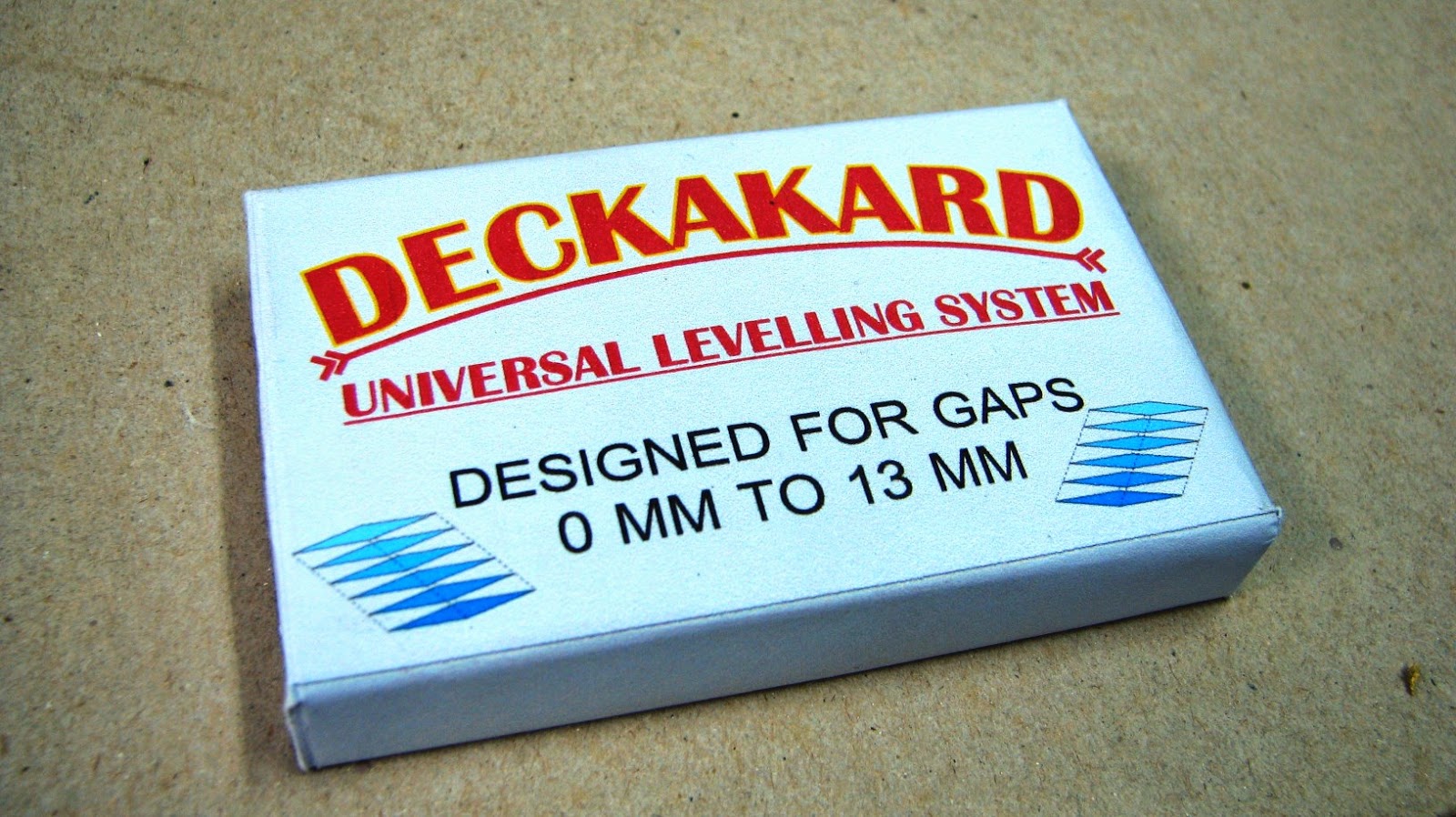 When I got home and opened the pack there were a total of 54 card like pieces. They measured 90mm by 60mm. Strangely there were no instructions in the pack. I assume they thought that they were self explanatory on how to use them. So with 54 cards you can to pack up gaps under legs from 0.05mm (1 card) to 13mm (The full deck).


I was disappointed when I opened the second pack to actually find a card missing. I felt like I was a few cards short of a deck. I was always told that when the chips are down to pick yourself up again.


So I turned up again at the shop and explained about being short decked. The shop assistant  told me to wait at the counter and went off to a back room. After a while waiting my patience was wearing thin. An old maid wandered down from the back room and after smelling gin and rummy on her I was ready to poker. I reached into my bag and put my cards on the table.


I always call a spade a spade and I knew I held all the trumps with the Fair Trading laws on my side. I said to her " I am not playing with a full deck of cards and have been dealt a bad deal and would like an exchange please."


Now as strange as it may seem she had an ace up her sleeve. She showed this  ace of spades to me and then I said yes that's the one missing. I now felt that I held all the aces and left the shop with no spite or malice and went home to try out the system.


As soon as I got home it was time to try out the Deckakard system under our outdoor furniture. You may think the ground is level  but as can be seen this chair required quite a few cards to stop the rocking. 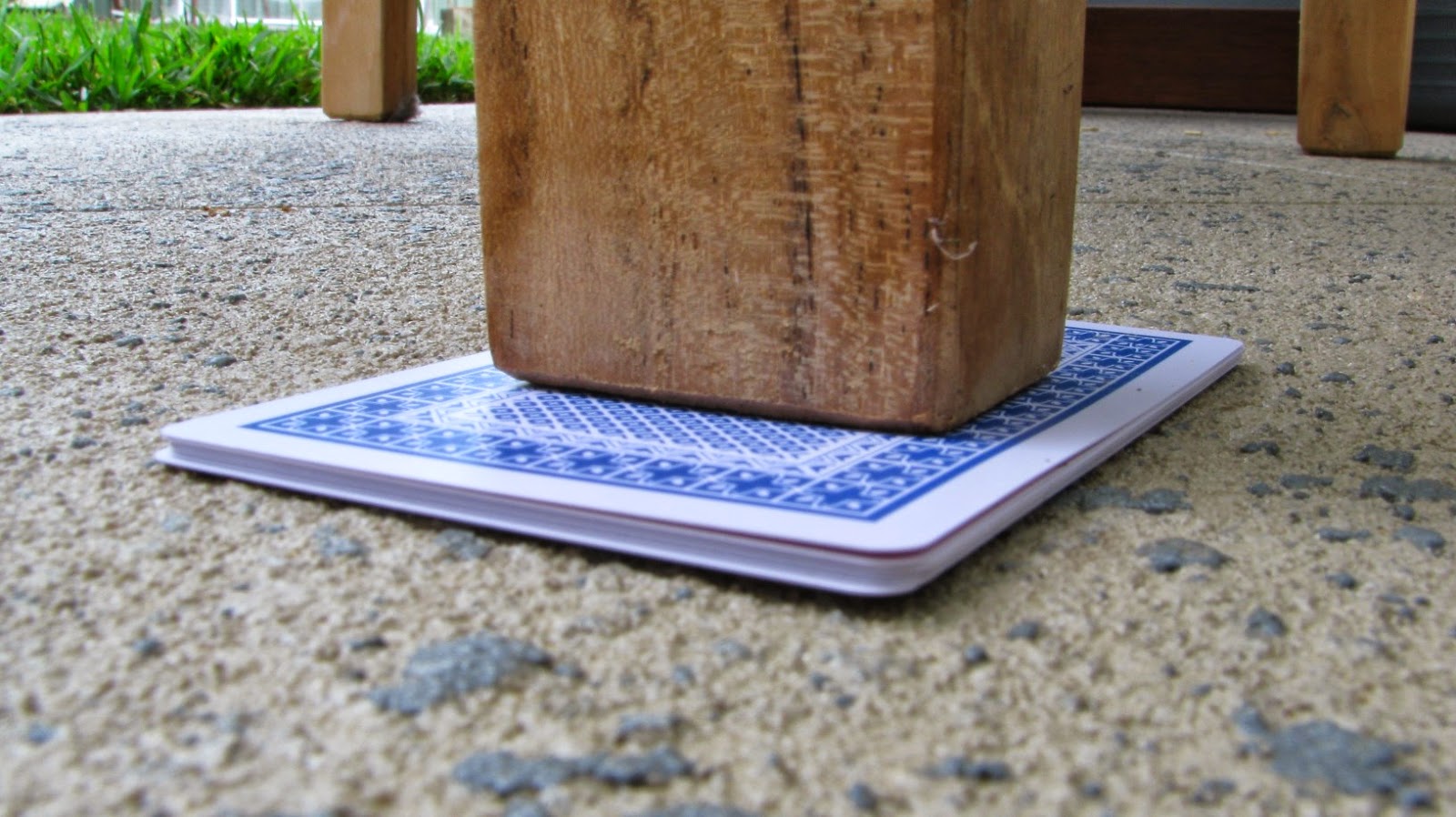 It was also put under a table. Being of plastic nature it will only have the four legs grounded when heavy items are placed on it.  The gap was large and took up nearly half of the first pack. The beauty of this system with the thin cards is the ability to get a precise level. You don't really need to measure the gap, just keep putting them under the leg until the rockin is a stoppin. 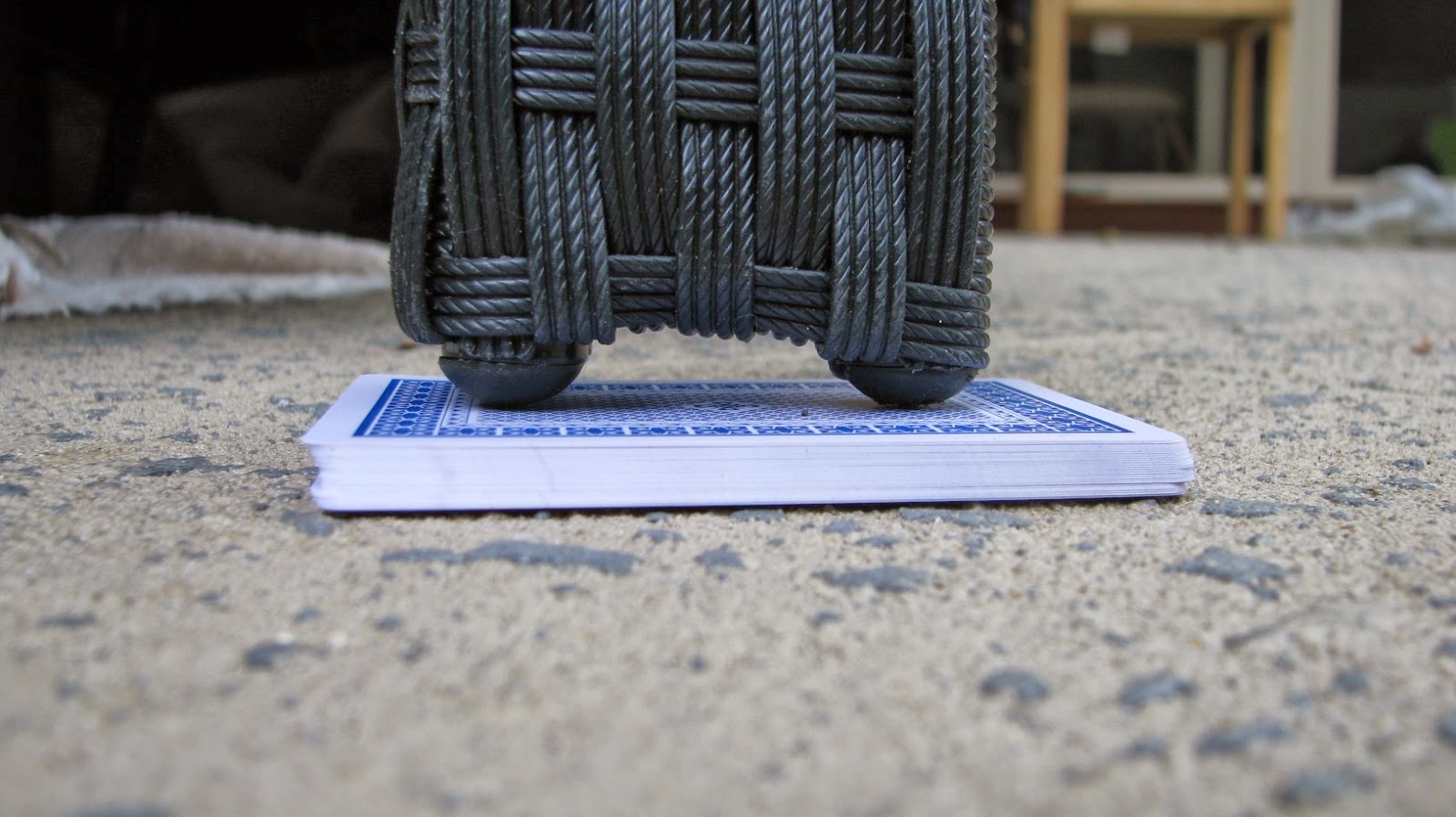 Down in the layout room one of the stools was particularly bad and uneven so two legs had to be packed.  Now it is very stable and you don't feel like you are about to fall. Notice how the closest leg  has more under it. 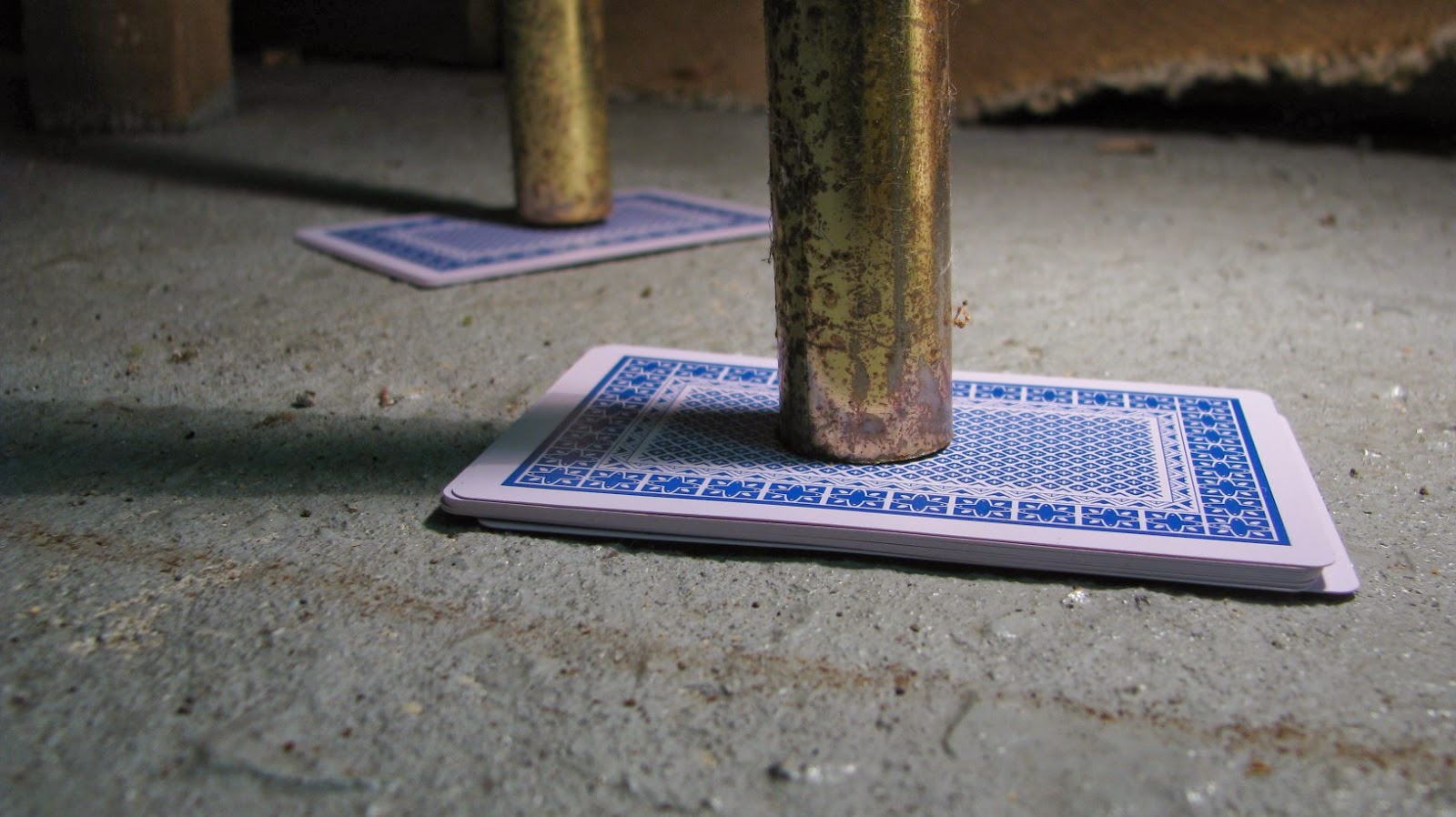 You can take a chance that you have bought enough packs home to fix all the levelling problems. But if the occasion arises that you have only one card left you have to "know when to hold them and know when to fold them" It is not recommended to go above two pack high as this would either indicate poor carpentry  or a big hole in the floor.


And lastly two of the cards in the pack have these words on them: 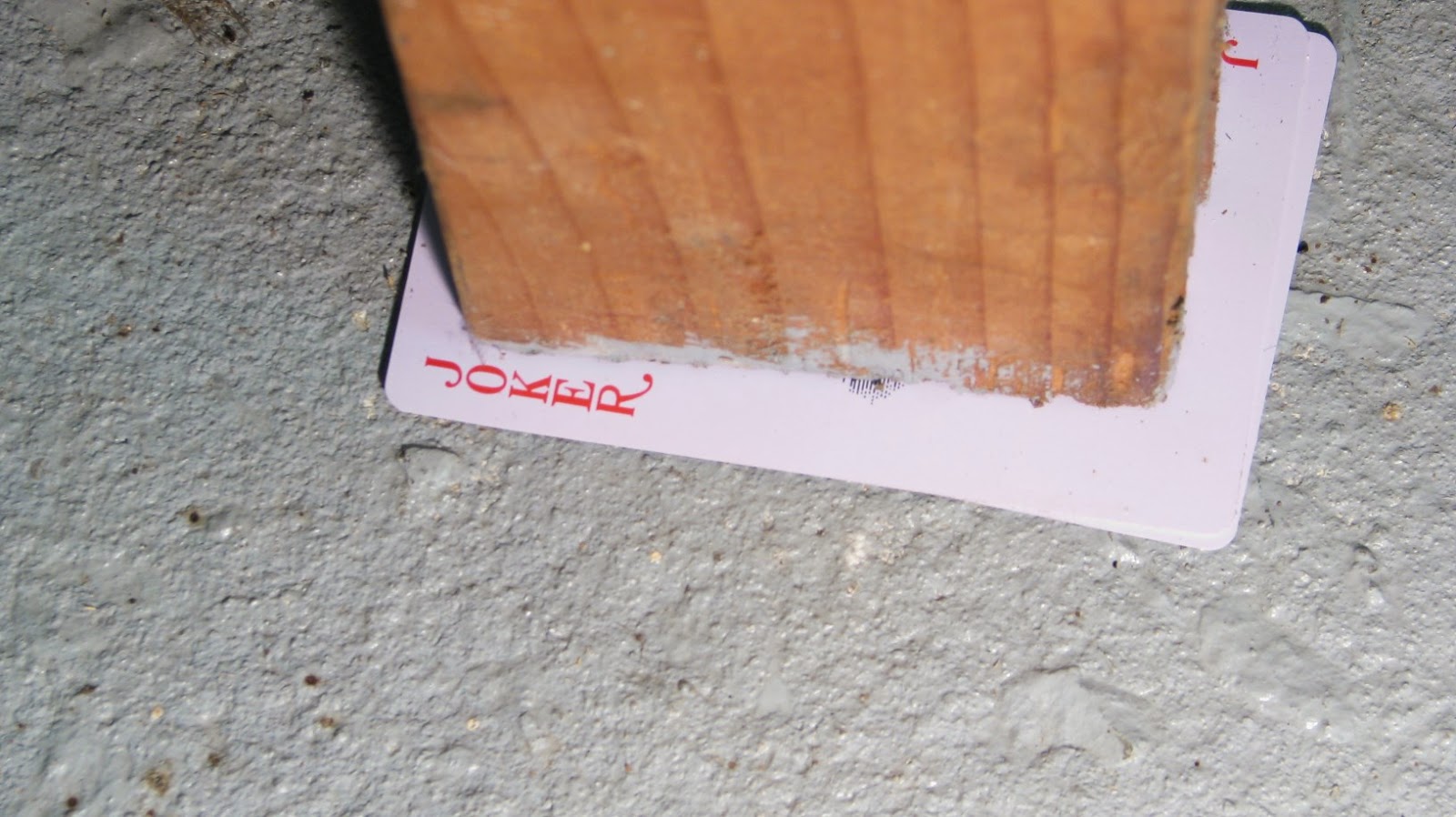