Broadmeadow Exhibition
One of my great enjoyments of a Friday evening is to turn off the alarm ready for a Saturday morning sleep in.
This routine was abandoned Friday night as I had to be up early for the Saturday morning train.
So for the sixth time in a row the alarm went off and after a shower and breakfast my beloved drove me to Hornsby to await the interurban train to Broadmeadow.
The indicator had shown our train as the next on platform 5, but confusion reigned when the Casino XPT turned up instead. With due respect to pensioners a train is a train and as they were about to board the train the loudspeaker roared into action and then explained that this was the Casino XPT, booked seats only.
It looked like there were plenty of seats on board, so quick as a flash we showed out gold passes to the attendent, explained we only wanted to go to Broadmeadow and were summonsed aboard.
We eventually arrived at Broadmeadow and then began the 20 minute walk out to the racecourse.
The show at the Broadmeadow Racecourse is a hobby show i.e. not just model trains. Many moons ago it was purely a model train exhibition, but the wheel must of fallen off some where and now we get a smorgasbord of hobbies.
I intended my first circuit of the area was to check out the model railway items first, then if time permitted check out the rest. Just inside the door I saw a pile of Austrains ELX's. I was using the reverse logic of a Victorian modeller, where I thought a splash of VR red wouldn't go astray and brighten up the sombre blacks and greys of NSW. Maybe they think the same and buy a few black wagons to break up the red? With a pile of these VR wagons so high, that John Eassie was able to hide behind, I thought no rush and I would get a pack on the way out.
Dropped in at the Gwydir Hobbies stand and purchased a nice looking palm tree for Bega Loco. At $34 I'm glad I don't need more than one. It seemed a feature of NSW loco depots to have a palm tree growing.
The great thing about these exhibitions is also the social side where you bump into people you know and then spend then next twenty minutes catching up news. Most of these talkfests seem to take place a the aisles narrowest point. Also known as a choke point and thats what I feel like doing to some inconsiderate morons as well.
I came across one table set out like a village and after looking for the train tracks and finding none, then worked out it was supposed to be all about war gaming. Well I reckon either the war hadn't started or they had called a truce and decided to go home. Nothing was happening. So I moved on.
After working my way around the hall I had found out that only one layout I hadn't seen before. It was Rix's Creek. Had some nice trains running.
Got round to Mr Joe Casula intending to get a PC3 station for Bodalla and found out they had run out of the kits. But Joe said there would be more available at Liverpool. As a consolation prize I purchased two new buffer stop kits. As Joe said if these new items sell well the the money can be ploughed back into new items. Go support guys.
The lunch queue was about forty minutes long so I decided to wait till I got back to the station to replenish the gut.
So with half an hour to go for the train back home, I went over and got a pack of VR ELX's and headed off for the station. An eight car train turned up at 4.45pm and after an uneventfull journey arrived back at Hornsby.
Tonight the ELX"s have already been weathered with Tamiya Khaki drab diluted down with alcohol (not beer) and they now look more respectable.
I probably will not go next year to Broadmeadow as I look upon this exhibition as a good social day out more than seeking new layouts to view.
Roll on the Liverpool exhibition.
Posted by South Coast Rail at 29.8.09 1 comment:

Wow check this out

I was cruising the model rail forums the other night, in particular the Model Railroader forums and I came across a thread that had a link to CG Textures. 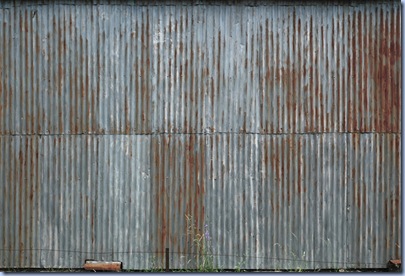 So after finishing viewing all the forums I trundled over to the textures site and wow what a fantastic find for the modeller railroader.

The site has an incredible collection of images of 35 sub headings. Now some of the headings are completely obscure and useless to the model railroader. The last entry is ‘X rays"’ and this further cascades down another 10 sub headings dealing with all parts of the human body. Now other than maybe having a ghost haunt your layout, this one you can forget.

But get up amongst some of the juicier titles such as ‘Brick/Modern Small/Dirty and then you have over fifty images of various weathered brick just sitting there to be downloaded. Just by simply clicking on the image you want, it then opens a page ready for downloading.

When you read what the site is all about it seems as if it was just set up for people to freely go in and use what ever’s there. A daily limit of 15MB daily download is also set. When you go into the users gallery you can see how some artistic people have used these images. I can’t imagine any model railroaders submitting much of their work to the gallery.

Now not only is this site set up as a freebie, the site owner has under the heading of ‘Tutorials’ set up heaps of ‘Photoshop’ workshops to help you get better results. I haven’t opened any of these as yet. (I’m not a Photoshop user yet)

One folder I particulary like is the one headed "’Concrete’ Is has 9 sub folders. I have found concrete as one of the hardest colours to replicate. But no need, just download the images and it is already, weathered waiting to be printed out and stuck to your model. Just think how easy it will be do model concrete bridge piers.

Some of the other folders that are useful for the model railroader are: Buildings, Doors, ground, Metal, Roads, Roofing, Rust, Water, Windows and Wood. Most of these have subfolders with some fantastic images.

There are images that while are no good for use being one dimensional such as pipes, they are great reference material for weathering, and knowing how it all fits together.

If you ever wanted to know how to weather timber go to the ‘Wood’ section and under ‘Planks Old’ they have 349 images of old wood. You can use these get an idea on how to weather your own timber or print some off and try gluing it down.

I will be trying some grungy downloaded brick wall to go in front of Bodalla platform when i get around to that area.

I suppose by now you’ve had enough of me raving on about this site so hop over there and spend a day looking and downloading some of the great images.

So far down the shed today all I have achieved is to saw some timber for the new oil siding at Narooma. Never mind still have all of Sunday to go yet.

It seems like we need a title for each post, so this one describes the perfect winters day we had here in Sydney. I spent a good part of it away from the shed ‘heavily pruning’ a tree (well it started off as a bush but got away on me). Another day at the end of a shovel getting rid of paving sand in preparation for some Italian grass (concrete). The pavers that once existed have been given away to a local family that seemed to appreciate the freebie. I had grown sick of weeding and repacking every second year where the filled in septic tank area decided to take another dive.

The removal of the paving sand was made a little easier by pretending I was shovelling coal into a steam loco. Worked for a while.

With the garage roller door open I received another burst of that fabulous winters sun that lights up the corner bridge on the branch. It sits just above the town of Narooma and I’ll get into improving the scenery in this corner when Narooma gets finished. You get a burst of natural light from the sun that doesn’t seem to be able to be replicated by artificial light. Any how here is the result: 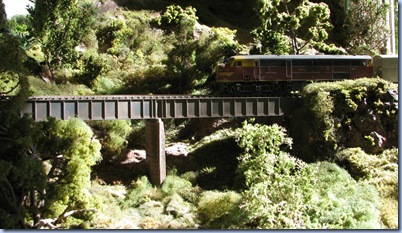