When you are use to the vast distances you have to travel in New South Wales from Sydney to the various borders, in Victoria the northern border of the Murray River seems very close in comparison. Echuca from Bendigo was around a 90 minute trip by train. Although cloudy on the morning and cool there was no rain about and the sun greeted us on arrival at Echuca.
At Echuca we boarded a coach to take us through the town to the wharf and down to the SS Canberra for a cruise and lunch. In this time of drought it was an interesting comment from the coach driver to mention when there was a huge flood in the past, the paddle boats used to sail up the street and tie up to the first floor railing to get a drink at the pub. (At least that is what we were told)
Arrival at the wharf drew an instant comparison with Circular Quay in Sydney, there seemed to be boats everywhere. The Emmy Lou was there along with others of all shapes and sizes. We squeezed aboard and set sail or should that be paddle and headed upstream past the historic Echuca wharf which had multiple loading levels to cater for the varying river levels.
The wharf had been served by a rail line at the top of the wharf. Our journey on the Murray was to last an hour, travelling past all shapes and sizes of paddle steamers and there was also a huge amount of houseboats tied up to the banks of the river. Many were for sale, one I spotted for a mere $292K. It would be easy for the novelty of a houseboat to wear off quickly,  the only choice you would have on the day would be upstream or downstream.


Nothing like being on the Hawkesbury River system with multiple choices of direction.
We soon got the call for lunch and there were sangers of mixed type cut into triangles waiting collection. I must say they were quite nice. Also to go with it was a plate of cakes and biscuits. We had a running commentary from the skipper and he related to Murray Cod in the past being so big they didn't have any scales in the town to weigh them. No quite so these days.
The SS Canberra was powered with a true steam engine powered with wood logs. You could look down and watch them being fed into the firebox and smell the hot oil wafting around. Reminded me of the good old days travelling on the South Steyne ferry and seeing the steam powered engine going through its paces.
It is great to see these relics of the past still providing a sustainable income for some and providing a great tourist reason to visit the town.
Too soon the trip was over and we returned to the wharf.  A nearby road had many tourist trappings that you could visit. I had to feel sorry for the guy and the two horses with the replica Cobb and Co coach just hanging around waiting for some passengers. The two horses looked bored just standing there side by side and with blinkers on couldn't even have any eye contact with each other. We had an hour to wait for the coach back to the station so we just moseyed around. Licking down a peppermint ice cream helped some. Back in a park near the wharf there was a group of rock and roller dancers strutting their stuff. The Chevvie parked close to the dance floor set the scene. Our group of eight who just happened to watch the proceedings for a while, were beckoned over by the organiser. The fact there were only two pony tailed ladies there dancing, made me think there weren't enough to around our group and I didn't fancy dancing with my mates. So we just gave the organiser a polite wave and drifted across to the bus stop to await our lift back to the station. I also noticed that the on the coach above the drivers head there was Lee Keernigans signature. I guess if you are famous you can make your mark anywhere.
When we returned to the station, the train was turned and ready to return back to Bendigo and right on 2.20pm we headed off. And back to the reminiscing from the good old days in the compartment.
On return at Bendigo there was an option to stay on the train to Castlemaine and then return on one of the frequent services back to Bendigo. Only Phil and I decided to get our moneys worth and Damon also had to return back to Castlemaine to get a lift back home. I was just coming on dark when we got there.
We had around a half an hour to fill in and after saying our goodbyes to Damon and watching the empty train chuff off towards Maldon, our Velocity came into view and after a half hour or so we arrived back in Bendigo at 6.35pm.
We had another table booked at the cafe for dinner that night. Again another nice dinner and at least two of the party couldn't fit all of their cheese cake dessert in the pieces were that big. Another night in front of the TV for a bit more footy and then off to sleep. Another great day.
Sunday  May 12
Down to the cafe at 8.0am for our second continental breakfast which was included in the charge for the room. It was quite sufficient. This Sunday also happened to be Mothers Day and two of our party had to return back to Melbourne early to celebrate the day with their wives. We said our goodbyes at the table as they were off to catch the 9.20am train. The rest of us returned to the rooms and packed up and left our bags and reception and then headed off towards the tram depot to have a look and then do the trip on the tram. 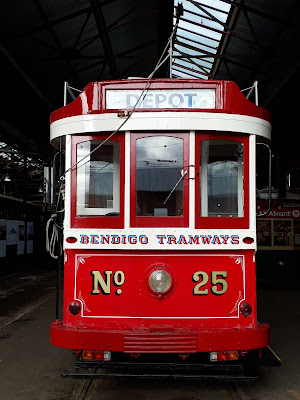 I mentioned to the very informative depot staff that the last time I was there was way way back in 1971, one year before the tramway system closed down in 1972. Bendigo still retains five Birney tramcars, the largest fleet in the world. No excuse required for another cappuccino and then onto the tram for a run up to the Joss House terminus. It brought back memories for me when I was very much younger.
We arrived at the Gold Mine to change over trams and a quick group photo shoot for the record. We had decided to catch the 11.20am train back to Castlemaine for lunch and a look at the town, but we also had to return to the hotel to pick up our bags and then head off uphill to the station.
Time was quickly running out and with only under 15 minutes to get there we headed off. We were all dragging our bags on wheels behind and you could tell how far we were away from each other by how loud the wheels were. It was very close and the last of us raced through the train doors with the conductor ready to close up and depart. But we(all) made it! 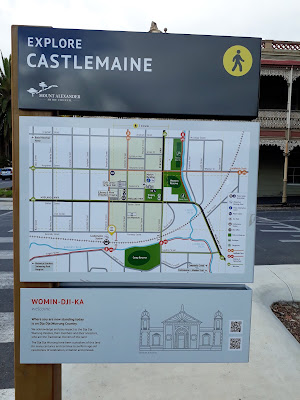 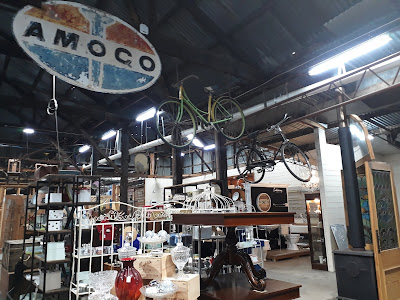 The main reason we were visiting Castlemaine was to visit a store called "The Restoration Barn". They said it was just up that street, turn right, then left down a bit. It felt like we were never going to get there, having just completed the sprint earlier between the hotel and the station. Hunger won the day and although John knew a good cafe, it turned out when we got there that it was chockers probably owing to Mothers Day. We settled for the Cadillac Shack opposite. I almost expected the Fonz to come in through the door any minute. Various burgers were consumed and then we headed up a few doors to the restoration barn. The store seemed to fit a category between an antique store and your local Bunnings. Although we didn't buy anything and Michael didn't get his screws it is an interesting time waster.
We headed back to the station and made our way to the island platform where we went to the shop operated by the Goldfields Railway and had yet another coffee. It was also a bit warmer in there. We moved over to the main platform to wait for the next train down to Melbourne again the Velocity set.

We were scattered throughout the carriage owing to the number of people on board, yes they are popular. Two of the guys near me chose to nod off while I looked out the window. Eventually reaching Melbourne late afternoon, we then headed across the road from the station to our new digs at the Savoy Hotel. It seemed more upmarket than our usual overnight hotel up in Queen Street and looks a likely candidate for our 2020 tour. The room was well appointed up on the 10th floor overlooking the roof of the Southern Cross station opposite. We crossed over the road again to a local bar within the station and I had a pizza washed down by a schooner of cider, very nice. Returning to the room it was still early so we settled down to watch some house reno shows on the room TV.
Monday May 13
Normally on the last day we would all travel back to Sydney by plane, but this time three decided to fly back and three of us  returned by the daylight XPT which was due to leave Melbourne at 8.30am and arrive Sydney around 8.0pm. Breakfast comprising a brioche roll with bacon and egg and yet another coffee at our usual cafe.
We returned back in First Class which I think converts to meaning 'more pensioners and old farts in the carriage'. The carriage was virtually full for most of the journey, some seats being vacated at intermediate stations only to be refilled by new passengers. By the time we reached Albury on the NSW/Victorian border we were about half an hour late, thanks to the track maintainer ARTC not doing their job properly. We picked up time at a few stations further on but also slipped back what we had gained. I had sandwiches for lunch and was slightly reluctant to try a hot dinner having tried them the previous year. But pork shoulder and vegetables sounded nice. You have to go up to the buffet car and collect them when they let you know they are ready. With a warm bread roll to go with it I found the dinner enjoyable. It was getting dark around Goulburn so the rest of the time I just chatted and annoyed Michael who drew the short straw and sat with me.
Returning via the East HIlls line we arrived Central around 10 minutes late. We then transferred over to a local service and I accompanied Michael to his home station to make sure he didn't drop off to sleep again. At the end of the line I got out and arrived at the 'family' pickup spot the same time as my 'taxi' arrived. I wasn't long before home sweet home and wondering where 2020 will take us for our train jaunt. A brilliant weekend in every way, so much friendship and great memories we managed to squeeze into our four days away.
I'll make an endeavour to write up something about South Coast Rail in the next blog update.