Time Flys
I saw the news tonight and listened to the ratbags in the US of A who were dead set certain that the world was going to end on the 21st of May. I am typing this with mild panic as although it is dark the blinds are open with one eye looking out for the asteroid or what ever it is approaches. It is already the 21st here in Aus so maybe it was American time that it was to happen. And to think I replaced two light bulbs tonight. What a waste of time.
Looking at other blogs I follow, and if they follow SCR the list tells you how long since your blog has been updated. Crikey I didn't know four weeks can go that fast. Well I must admit I have'nt spent much time in the shed lately having been busy with yard projects and other computer assignments that have deadlines to be met.
After my recent 'loss of data' fortunately I found on a second computer many photos of SCR dating from early 2002 up to late 2009.
I went through some shots of August 2002 that were taken mainly of Bega, the main station that runs down the centre of the shed. This is where the main action takes place. The main platform has three platform faces and two docks. There are carriage sidings, goods yard, a few private sidings and a yet to be developed loco area.
There are two frightening things about these shots. (other than being crappy low res shots)
But the good news is when I look at the layout in the background I can see how much progress has been made from chicken wire hill. 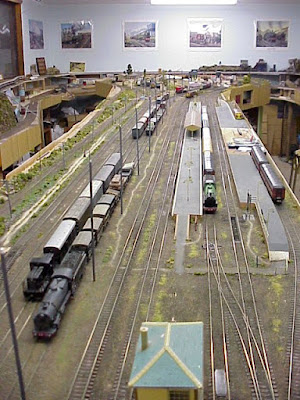 This shot shows the main platforms and goods roads
The loco area is down the far end. Taken in August 2002 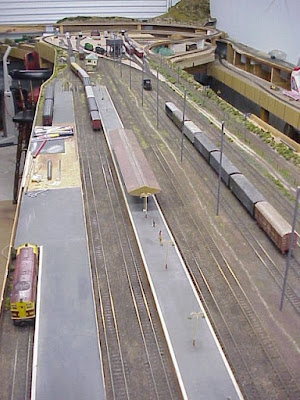 This shot is taken from the opposite direction with the
passenger carriage sidings in the centre.The unfinished scenery
in the background is now completed. 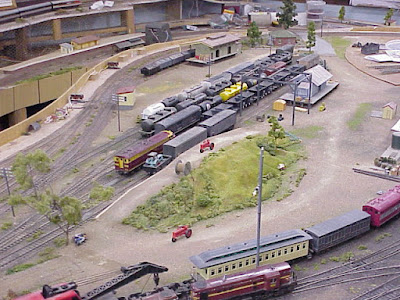 A small goods yard is situated in the loop at the end
of Bega Yard. A cement plant is now where the RU's are.
Loco depot to be built to the right hand side. 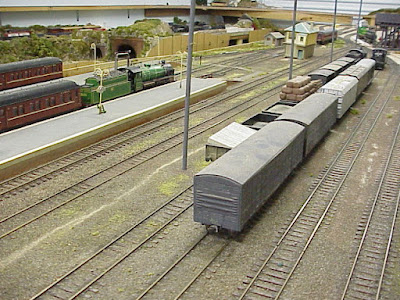 The last shot looking over the platforms and goods yard.

Well if the world ends tomorrow in America, I hope I will be sound asleep in bed and know nothing about it.
Posted by South Coast Rail at 21.5.11 4 comments: