LCA
That stands for Lights, Camera, Action. I received a call on Friday saying that my camcorder was ready to collect. It was picked up after work and it was hard to resist getting it out of the box on the train home and having a good look. 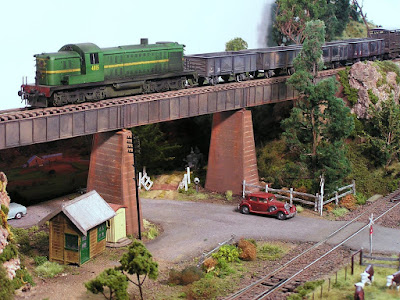 That was done after dinner and the battery was put on the charger. I re-read the manual and like any good product there is a certain amount you can nut out yourself.
The model camcorder is a Sony HDR - XR550V and seems to be top of the range for their range of hand held cam corders. It has a 240G hard drive, 12mp still photo shots, 5.1 sound and the capability of filming in very low light. Its only maybe drawback is the 10x optical zoom. This shouldn't be any problem videoing the layout though. It has a digital zoom though, but this aspect hasn't been tested yet.
Saturday morning saw the camera see daylight again. I took it for a walk to the local station to try it out on some moving trains. What I also forgot to mention earlier was that it is also equipped with a GPS tagging system. The manual on this item is full of techno babble but all you had to do was switch the GPS on and open a top flap so your camera can talk to the satelites. Of course this is no good using indoors unless you have a hole in the roof.
I only managed to film a few suburbans and intercity trains. I was hoping for a GM led freighter to test the sound but none came. Thats for another day.
I was able to view the results on the 3.5" camera screen and they looked OK. At home I plugged it into the computer widescreen monitor and enjoyed the takings. I also tested the GPS facility and when I looked at the result it correctly had me positioned north of the station where I took the video from.
Another good reason for getting the camera sooner than later was that Sony was offering a free version of Movie Studio 9 (a video editing programme) when certain HD camcorders were bought but only till the 12th July.
I am mailing off today for my free copy and it won't be until I can download the programme will I be able to put some sort of movie together. In the meantime I can look ahead on Youtube at the many tutorials on this subject.
Saturday night saw me and the camera head off to the shed to take some footage of the layout. Again I must confess the star of the clips was the only sound loco I possess - the Garratt. (Hurry up with the 40 class will ya Ron). At least filming a sound loco you can readily identify its position on the layout. I concentrated on one end of the layout, namely around the gully area as this is the most complete in regards to scenery.
Another feature of the camera and only on this model as far as I can see is that it has a rear viewfinder that can be used without having the side viewfinder flipped out. What this means is that it should be narrow enough to be placed on a flat wagon and propelled along for that on train view.
Lastly I checked out the low light capabilities. With all the shed lights off I was able to film the garratts progress along the line with just the headlight showing the way. It was clear enough to be able to discern the scenery as it passed by. Very impressive. And so far I can recommend this camcorder.
I have included a clip here of the garratt heading down the valley.
Also a few shots from the vault from around the layout 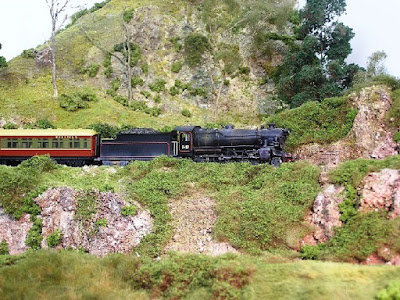 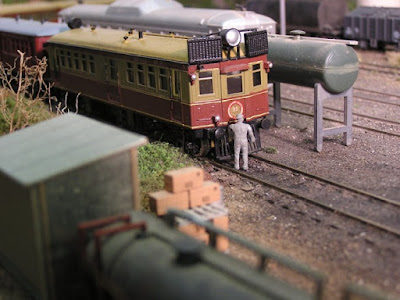 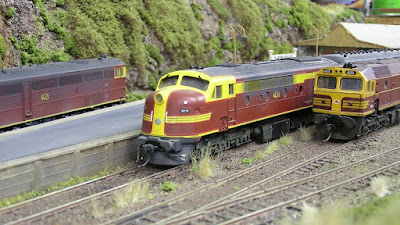 This weekend was Sydneys second major model railway exhibition (after Forestville) even closer to home when it was held at the Brickpit Stadium at Thornleigh.
My major intent was to clear the decks of surplus items and create a cashflow for some of the new products coming onto the market. Its surprising how it all adds up. The Friday night drop off came as a bit of a surprise. I regularly pass the outside of the Brickpit to and from work each day and thought they would be doing well to fill this one.
But on Friday night I realised that the exhibition was held on a single basketball court and the other three courts were busy with the sound of bouncing balls. The place is much larger when viewed from inside. The floor area was much better than the Epping Boys High School and from talking to people and feedback from forums it seems all are happy with new venue. It looks at this stage that it will be there for at least another two years (and many more I hope).
There was a good mix of layouts and trade stands and I was able to get some more MiniNature products for the layout. I also purchased some single lamps for Bodalla platform so the passengers can see where the edge of the platform is.
I had a visit on Sunday afternoon from Ray Pilgrim who has the Bylong layout. I had the pleasure of visiting Bylong last year when Blair and Lance from Texas visited. It was a very enjoyable night. I did my best to run a train but when the train reached Bega station it was uncoupled on the water effected baseboard. Oh well that can be another future Blog topic to bore you with. Ray's layout has at least some flat areas that doesn't require cliff edges. Maybe the next layout.
Hope to be taking delivery soon of a Sony camcorder and after the learning curve will post some more video clips on the blog. It will be a few years away but I would like to do a complete film of South Coast Rail, at least if I'm sent to the nursing home I can sit back and enjoy the memories.
I happened to be trackside this arvo and got a few shots of 42110 cruising around the layout. I hope you appreciate the last shot as I had to climb a tall tree to get it. 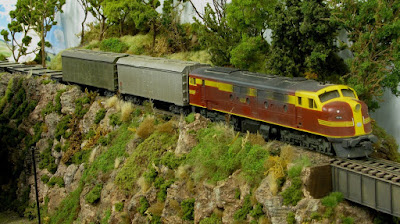 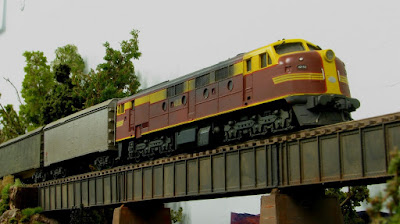 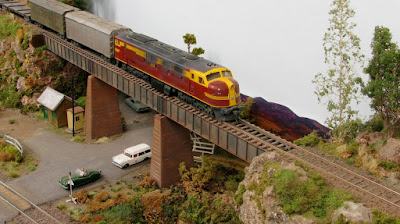 Here we go again
Well I'd like to start tonights blog off with a photo of the gully region. If you are a person that only likes good news, have a look at the photo and then close off. 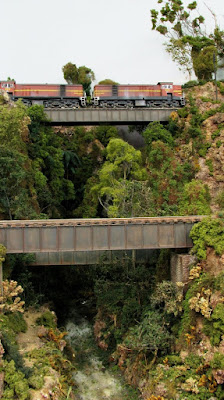 The photo is one taken a while ago as I didn't get any work done on the layout this weekend.
Saturday morning comes and I got a visit from Brad from Canberra (http://armchairmodellerdownunder.blogspot.com) to see the progress on SCR. Brad used to live at an adjoining suburb, but has recently moved to Canberra where he can now enjoy the extremes of weather. So until he can get his mans shed fixed up for his layout and insulated he will either get dressed up as an eskimo in winter or strip off in the heat of summer.
Due to the heavy rain during the week this was the first time I had entered the shed. All looked well as I was confident the grand I had spent on the roof was the end of my leak problems. Wrong. Looking at the end of the platforms the ballast looked noticeably darker and on closer inspection there was swelling from the old pineboard.
The last time this section copped a hiding from the weather was back in October 2007 when the Pasha Bulka was washed a shore in Newcastle. I replaced the affected section with ply (what I should have used from the start) and there was still a small strip of pyneboard between the two sections still remaining. I was reluctant to replace this bit as it had a few points on it and it will be hard to rematch up the ballast work. Well this was the section that had been water affected and now looks like will need a rebuild soon.
So much for my recent 'Last post' and the reroof. I think the problem lies with the lower roof where it butts up against the front shed. I reckon the water was flowing up hill. Any way it remains a future subject to bore you with.
I got together the last bits for the upcoming second hand stall to raise funds for new purchases for SCR. I came across a pile of old code 100 track that was from the layout and had now been replaced by code 75 track. I had offered it free to anyone that wanted it but no one wanted it. So taking advantage of the local council clean up this weekend I wrapped a pile of wire around it and placed it out on the street on our contribution to land fill. I am pleased to say that after being there for a few hours it was gone. No I'm not sure if it was taken by a guy who wanted the copper wire holding the bundle together or a nickel silver merchant, but I hope it went to a local model railway enthusiast.
Posted by South Coast Rail at 6.6.10 2 comments: