Around the bend, that's where I am doing some work at the moment. I can't believe that the layout has been under construction for nearly five years, way back in December 2015 was when I was starting to rip the old HO layout apart. Dropping into this scale has meant a lot of work in regards to sourcing O scale everything. Luckily the locos have been available through Haskell who have done the NA's from the Victorian narrow gauge system and also Bachmann who have supplied the Shay, Climax and Heisler to add narrow gauge interest. Although Bachmann have done other narrow gauge steam locos such as the 4 - 6 - 0's and 2 - 8 - 0's etc I have resisted getting any as they would tower up against the NA's. I have four NA's all sound equipped and this should be sufficient for operation.

As has been mentioned before the departure of Ian Lindsay Models in supplying his great range of VR narrow gauge models has now made it very hard to new modellers to this scale. Although Ian has been producing these models for close on forty  years, I was lucky enough to obtain enough models just before he retired. Now the only source will be through the second hand market. One can only hope that in the future 3D resin printing will be advanced enough that these models will be available again. It is a very lonely modelling scale and prototype, the number of modellers I know of can be counted on one hand and still have the thumb spare. Just call us unique and that's what I like about it. 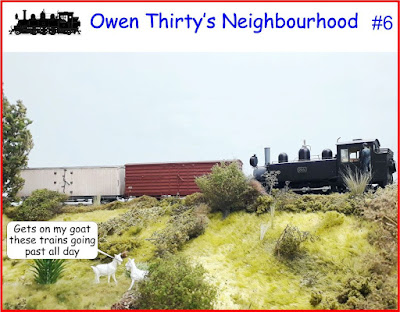 I have added another Owen Thirty Neighbourhood as per the above. It was taken in an area yet to be fully sceniced, more of an experimental area.
I have done some scenery work between the level crossing and the Snug Cove Mallee shed, at least the pathway is clear to follow for the passengers. The mockup paper shed will certainly be replaced one day with a proper one it is just there to provide some scale to the scene. The base was done with the universal local oval dirt and the pathway was formed by using sandpaper on the dirt to get it smoother and then some coloured chalk was rubbed over it to provide some variation. A few more larger bushes will go into this area later on.

Some benchwork has been undertaken to tie in the full circle of the layout. I decided not to go with the previous inward swinging gate on the HO layout as there was sometimes trouble in getting the tracks to line up when it was closed, that was a combination of my poor carpentry and the weather which when wet would swell the timbers and then the tracks wouldn't line up. I remember one operating day when no amount of hitting with the hammer would get the tracks to line up which resulted in a different operating scenario on the day. I am not sure if the next setup will be any better but I will give it a go. I guess I will find out when it all gets finished. 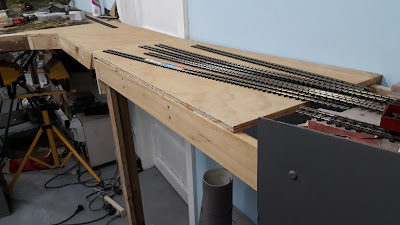 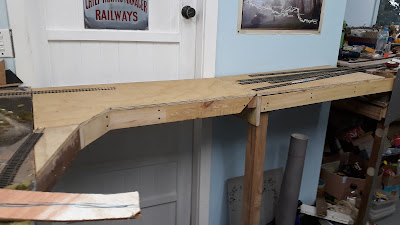 I had constructed the lift out section initially with straight sides all round and only after doing this realised it would have been better to have cut one end at a 45 degree angle to assist the dropping in of the liftout section. As I don't possess the right tools to cut the angle correctly I spoke to a mate Mike who was able to assist me in utilising his equipment in his garage and we got the job done as can be seen in the above photo. All the above boards will be painted before track is laid to try and prevent moisture absorption and possible swelling of the timber. The shape of the board was due to the angle of the track coming out of Eden and the need to turn 90 degrees and head up to Bega. 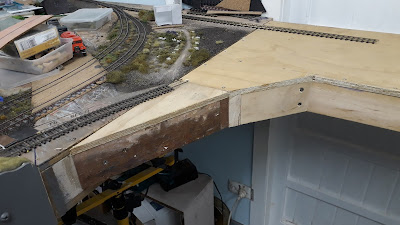 The boards will be edged similar to the rest of the layout and this will cover up all the crook carpentry etc. I was quite surprised with the weight of the liftout section but it needs to be a compromise between strength and weight. At the moment I am able to limbo under it and may leave it out in future and put into place only for operating days.The above photo shows the missing section between Bega (bottom painted section) and the rest of the present layout. There was always going to be an uphill grade between the sections and I was a bit hopeful that it wouldn't be too steep to limit train sizes so by laying out the track as above I was about to find out.I joined a few lengths of track together and commenced some load trials with an NA. I started of with a train of six mixed vehicles and it ran up the grade no trouble. I then extended the train to nine vehicles and again it handled it no trouble. I was happy with this size train and it may be able to handle more vehicles but at the time I couldn't fit any more track in. The track in the foreground will need a frog juicer wired in to reverse the current as the train heads from Bega to Eden and vice versa. 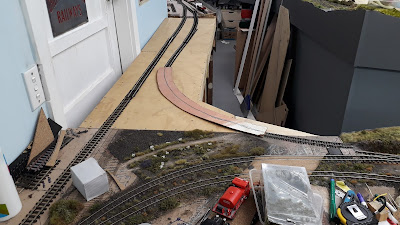 The last shot above shows the extent of the current work. Snug Cove in the foreground, Eden to the right and the track to Bega in the distance and the bottom left the track to Broadwater. So with a little more work it is hoped that the first train to circumnavigate the shed will happen early in 2021.