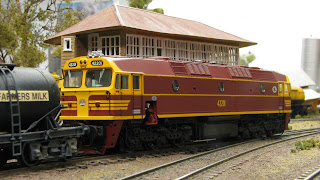 422 arrives
Another promise finally arrived in the post this week. After what seems to be a long wait that us modellers are getting used to, it was announced that the 422 class loco had finally hit the shores.
Most of us NSW modellers would have had a least one Lima 422 class loco on their layout. Now while the mechanisms weren't the best you could obtain at the time I thought the body work seemed reasonable and could be dressed up for a reasonable looking loco. It was probably the closest representation Lima had done for a loco. Remember the 44 class in the VR colours? Was it suppose to represent an S class?

The loco was another product from the Auscision stable. It is my first loco from them as it is the first they have produced to suit my era of modelling which is roughly 50's to 70's. It is the era I grew up in. I must say the ordering of the loco was painless through their website. No printing of pages, sticking the order form in an envelope and licking shut. From ordering via the internet until arrival it was a matter of days.

I have found the Auscision company probably the best organised of all the groups. Although admitting I haven't ordered from all groups) This starts with their website which is always up to date, easy to find your way around and graphically excellent. Although you couldn't expect all manufacturers to equal their site, theirs stands out.

Well enough back slapping and the loco finally found its way to the layout this weekend for its first foray on the layout. It proceeded as a light engine trial around the layout and went well. As expected the locos come clean as a whistle, looking like locos coming out of the workshops. My intention as soon as I can find someone is to get it weathered. It wouldn't have been clean for long in real service. I was very dissapointed with my previously purchased pre-weathered loco as have a few other people I have spoken to. Its not just a matter of setting up a spray gun and driving the train/loco past it. 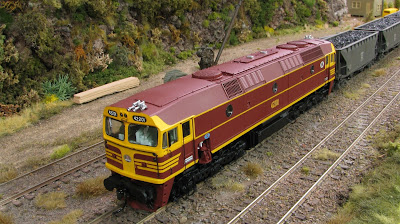 A load trial was conducted with a coal train and I just happened to have a camera handy when the first run slipped through Bodalla with the train. 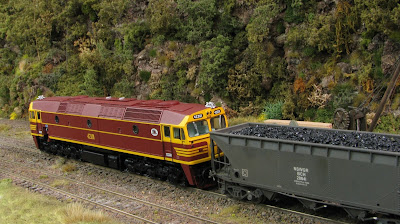 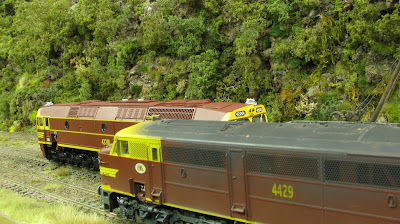 The train was waiting to cross a light engine movement consisting of a double 44 class locos. Soon after they moved off towards the next crossing loop of Batemans Bay.

Well the 422 has been well received, now if only those other guys that are doing the 40 and 48 class locos would get a wriggle on.