I am finally getting closer to building the first major station when you leave Eden. Snug Cove will be a halt just outside Eden and in real life is near the water. I will use that fact to later hope to include maybe a wharf opposite the halt.
But further on, up a slight grade the first crossing loop to be built on the layout will be Broadwater. The choosing of names for South Coast Rail was not rather scientific, nor was there any reasoning behind the names eventually chosen. They will be built in order that they appear on a map.
Originally going to be called Greigs Flat I changed the name because I liked the name Broadwater better. Looking at the above photo probably gives the reason behind the locations naming. When I picked out the names for the towns on the layout I didn't study the locations closely. I really found that out today when doing some research on Broadwater. When 'Broadwater' was typed into Google the South Coast location hardly rated a mention.

So I went onto Google Earth for a look around. I couldn't even find a single shop, the only place that seemed to exist was the Broadwaters Oyster shop on the shore of Lake Pambula. So how do you model an O scale oyster? This lack of township and anything else has me rethinking the size of the station building they will get/deserve. The larger the town the more grand the station usually is. So it shall be a bit larger than the one to be built at Snug Cove. They might even get a dunny attached to their building. 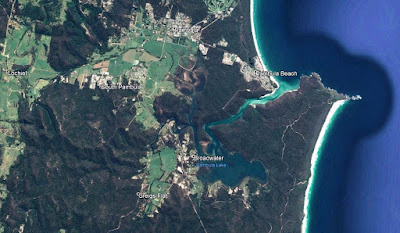 The aerial view shows wooded hills and some clearing that probably supports farming. So after considering all the above info I could gather on Broadwater, I came up with a track plan that has completely no bearing on the location.

The above plan shows how Broadwater ties into the layout built so far. This baseboard goes right across the roller door or the width of the shed up this end. The plan is to scale, so it just indicates when your modelling scale is increased from what I was used to in HO scale just how much real estate it takes up.
What is there? A crossing loop and a two ended goods siding which has a siding that will take two stock NM wagons. On the other side will be a private industry siding. What will be there will be decided in the future. I have drawn the simulated train on the diagram so the loop will hold a loco, nine vans and a van at the rear.
A passenger station will be along the rear of the baseboard and cater for around a three car passenger train. A water tank will take care of watering, although it is a down hill run into Eden from there. A level crossing will cut across the tracks at the trestle end providing some type of scenic divide between the two baseboards. A goods shed with platform will be provided on the goods loop. Ian Lindsay models has come to the rescue here. The shed is small so I think it will be large enough for all the oysters that they want to rail out of the place. I have to build the platform that goes under the shed though. Points will all be hand operated as the layout is designed for the operator to walk around with the train.
One thing I have realised by accident, not by choice is that the five sidings built so far when you leave Eden are all trailing sidings. This makes it easy to shunt in this direction but a lot harder when going in the opposite direction. I don't see a problem with this and it will make shunting when running in the opposite direction much more challenging. I must try and reverse the sidings on the next town.
I have made a start on the baseboards for Broadwater. The residents should think they are lucky in that all the timber for here is new and not recycled stuff. The above photo shows where the level crossing will cross the line and the relative closeness of the trestle.
There are only two baseboards for Broadwater which are locked together with two wingnuts. I don't think it needs anything stronger. Some cross bracing is required for the legs.
As soon as I had the flat surfaces done it was then down to track design. Out comes the paper templates (very cheap) and a few lengths of flex track to try and create the final track design. One thing I have always been in favour in track design is to model curves rather than just straight track. It just looks better to the eye in my opinion. Getting that curve right adds to the final appeal. The station only has six points but there will be enough shunting to take place to make it interesting. The livestock siding in the above photo will take two NM wagons but if there are other wagons in the way at the goods shed they they will have to be moved and replaced prior to placing the cattle wagons.
On the left hand side of Broadwater after coming off the 'Thomson River bridge' three points will lead in to the loop, goods siding and the private siding, yet to be assigned an industry. The inside track curve for the goods siding looks like the tightest curve so far on the layout. I might have to put a check rail on it.
I think I will be happy with how the trackwork will pan out, hopefully not too complicated as far a narrow gauge design goes.
Anyhow that is the history of Broadwater according to Bob. So I had better get started on laying some more track. The sooner I get it finished the sooner I can have some limited operation on the layout.
More next time.
Posted by South Coast Rail at 29.8.17 1 comment:

Back along the back

I have done enough work around the trestle now, so I looked for another area to commence on. The track has been laid and ballasted across the trestle. 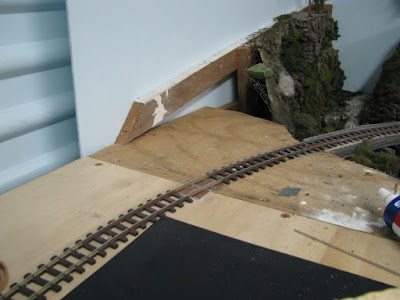 I decided to start on the 'left' hand side of the trestle. This section joins the rock section towards the waterfall on the right to the section that will run into Broadwater. I have used some sections of  3mm mdf board on the rear of the module also painted it the wall colour so that it blends in.
As can be seen in the photo some scrap timber is used to attach the scenery to. 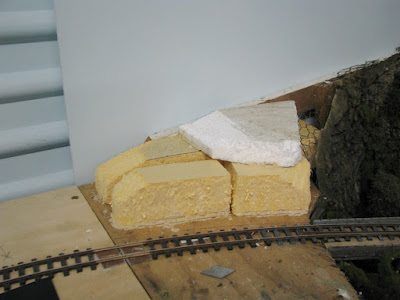 Some high density foam was glued down to support the 'grass' that will be above this section. I was initially going to use this yellow foam throughout the gully section but just ended up using the soft foam for the rocks. Dang so many types of foam to describe, I should just call them foam 1,2 and 3? 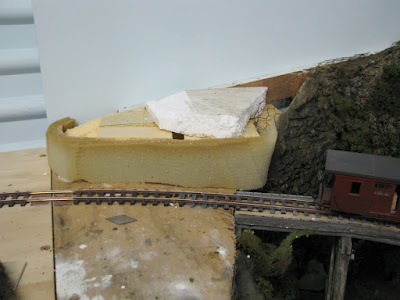 I had a piece of soft rock foam and glued it to the yellow foam. This piece is about to be tortured with the soldering iron to get the 'rock' effect. No rocket science in what I have done so far. 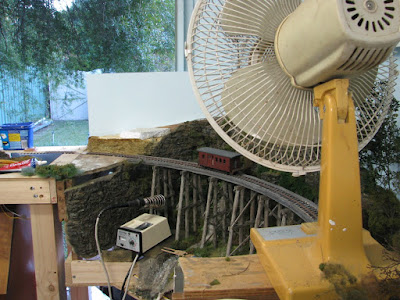 Now the next step in soft rock barbecuing is very important, almost a life or death issue. Either do the melting outside or have a large fan behind you, set to the max speed. If you are worried about your hair getting messed up, don't. Your lungs are more important.  The weapon of mass destruction aka soldering iron is shown ready to go. As soon as it hits the foam it will produce acrid smoke, so be warned. I think the end result is worth the effort. So if you are new to this work please practice outside first. 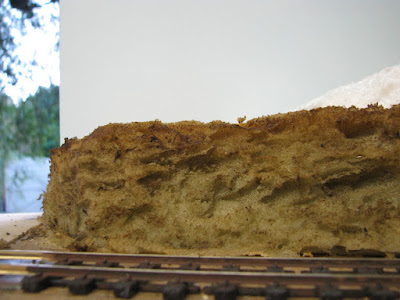 Not the best shot but compared with same section in photo 3 it can be seen how the soldering iron melts the foam readily. It takes a bit of practice to get it looking Ok, I am still learning. The beauty of this type of work is that you just apply more greenery over the bad bits. 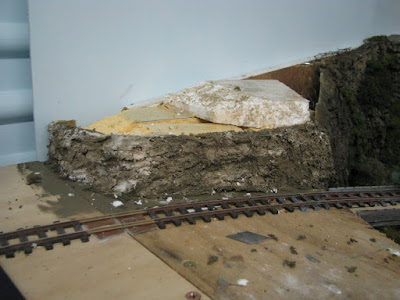 I experimented with some Selleys Rapidfill over some sections of the rock. It took away some of the holes that occur in the foam. Old Harold the paint came out again for the base coat. It is starting to look a bit like rock now. 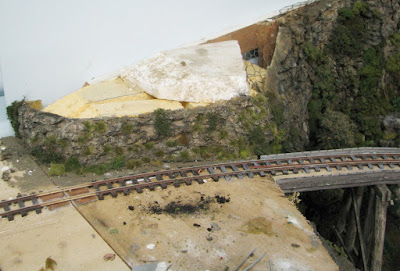 As soon as you hit the area with some greenery it starts to look better. You can see that the new section has started to blend in with the other completed section. I find that also by using some foam under the scenery it gives a base to poke trees into later on. I used some of the Edco dish washing  cloth over the 'hole' above. Once this was glued into place it was just a matter of chucking in some bushes and anything green I could find till it starts to look Ok. When I dismantled the old HO layout the scenery was stripped off and placed into containers for times like now. 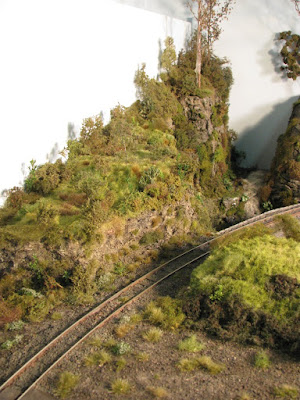 Well I forgot to take some photos between the previous photo and this one above which shows this area nearly complete. I am quite happy with how this section is blending in together. I just need to get a few taller trees into this scene, then it will be complete. The track has been ballasted and so goodbye plywood central. Marvellous how quick the weeds grow. 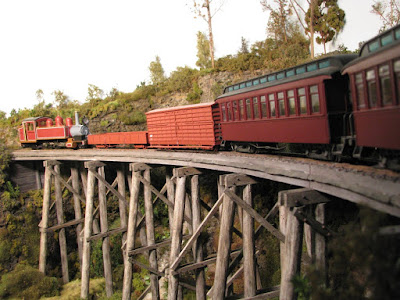 It now looks better now that the back section has been done. I might buy a ticket and have a ride myself!
Posted by South Coast Rail at 13.8.17 2 comments: