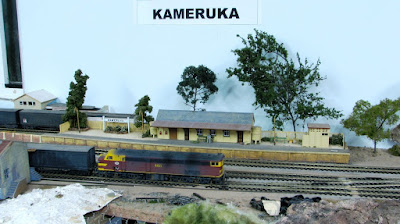 Well I have chosen to update the blog instead of my other project allocated today which was to get the remaining section of guttering painted. It is stinking hot and humid outside so it can wait till better weather.
Kameruka - name change? I had thought for a fleeting moment to change to name the name to Coolum. Yes it would be more appropriate to call it this. Unfortunately the station location is right under a window. And stuck in the window is and air conditioner. But after the last blogs effort on trying to justify why Kameruka needed at station, it will remain so named. Anyhow Coolum is up there in Queensland.
So you get good and bad with the air conditioner. It was purchased many years ago at a garage sale for the great price of $20. For this price I didn't want to cart home some one elses scrap metal, so I asked at the time if it could be plugged in and tested. Sure can do said the man. But stupid me fell for it. As garage sales usually start early and it was a cold August morning when the unit was turned on it was a matter of cold air in through the back and the same cold air out of the front. Doh!
Another thing about the controls on the air conditioner. For temperature you get a choice from 1 to 10. So if ten is the coolest when would ever use numbers one to nine? I'm bloody hot, give me the max man. And the function control is just as stupid. Fan and Lo Cool options. Get real. I'm still hot, the knob is set on Hi Cool and probably rusted in to that spot. The only other knob is sensible one. Its the timer, and graduated in hours. Exactly thats a good measure of time down in the shed - hours. 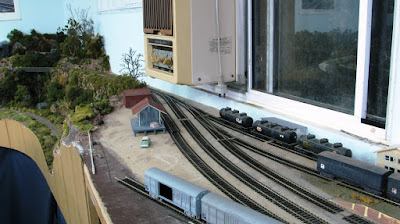 I bought it anyway. My salvation came when a friend saw it and identified the something inside wasn't right. He took it away fixed it and bingo I then got the bargain. It wasn't until the shed had been extended until it was placed into the window and there it remains. The bad bit is it infringes over the Candelo end of Kameruka and the track passes under it. Glad there will be no double stacking going on South Coast Rail. It will be hard to get reasonable photos without it showing up. At least this model is called the G.E. Skinny. Imagine how much larger a G.E. Fatty model would be in photos. I must say this model is a try hard unit. It certainly wasn't designed for this size shed but is better than nothing. At least I can work down one end and be reasonably cooler. 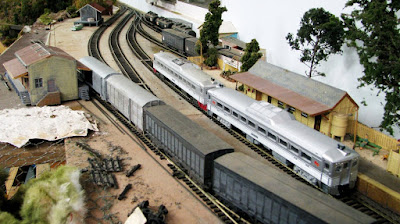 The code 100 track from the Candelo end has been removed and the code 75 track and points laid in. The oil and milk sidings can be seen in the photo and the fruit loading siding in the foreground. If you thought the good shed looks familiar your'e right. It had been borrowed from Bodalla which was previously borrowed from Candelo. I have similar good sheds waiting for assembly for both locations, another job for the future. 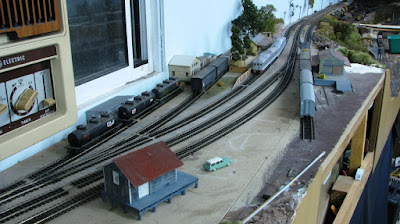 I am going to extend the platform at either end to cater for longer passenger trains. The station was built a long time ago as part of the conditions for attending the Branchline Modellers Convention that used to be held at Macquarie University. It was a great day out and this requirement to bring along something you are working on was a good incentive to get a project up and finished. This convention operated long enough for me to have completed this station and also build a sand bin based on the ones located at Eveleigh, Taree and Cootamundra. I also managed to finish a yard lamp that is now residing in Bega loco. There was so much talent out there all on display. Sad its not around anymore.
Kameruka sits above a tunnel where two tracks crossover each other. To gain access to the tracks underneath a section of panelling has had magnetic catches installed as shown in the photo. It is a simple removal to gain access to the area underneath. And also my crook carpentry can be hidden. 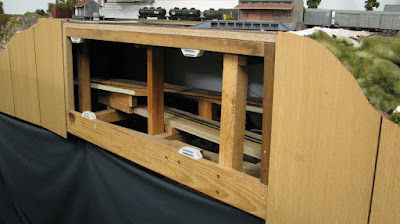 Kamilaroi Railway
For those of you who have a link to the Kamilaroi Railway blog and find its no longer there, Jim has deleted the blog for the time being as his computer was infected with a virus and worm and he removed the blog in case of cross infection (can you get that off a blog?). Anyway he will be back to continue on his interesting journey of North West modelling. Will keep you informed.
Posted by South Coast Rail at 20.2.11 No comments: