It seems like I am settling down to a blog each month or at least it shows 4 weeks since the last post. I don't suppose that's too bad a looking at some others bloggers. Many blogs start off well but the number of posts soon dry up and then no more. We all have our reasons for this and my layout workload certainly fluctuates over the year.

Truly understanding why people make micro layouts it gives them the satisfaction of saying that they may have built three layouts this year, meanwhile I am slogging away at my monster and wondering if I will ever finish it. But then layouts are never finished are they? Call me greedy or stupid I really love the size of my layout and all of those unfinished section have been stared at and I know how they will be finished off (one day).

Looking at some file photos of my Thomson River bridge , I find it hard to believe I have been at it for over two years now, so I am determined that after our running day this coming week it will become a priority.

Another priority that was completed was the liftout section was completed. Initially it was to be a lift out section, then I thought how easy it would be to just hinge it upwards out of the way. Many, many times I have mentioned on posts that I was not blessed with carpentry skills, so the chances of this working were very slim. Couple this with the great amount of rain that Sydney has been having lately (no bushfires thank goodness) and the thriving humidity I am hoping that it will all line up and no swelling. The HO layout had a swing in gate and after varying weather the tracks wouldn't line up perfectly. I painted the underneath of the swing section to minimise any swelling, so time will tell.

I had some hinges to try and after putting them directly on both sections i.e. the layout and liftup section, when I tried to lift it up it failed. I was later told the the hinges need to be slightly elevated on some three ply to allow the rails to clear each other. I tried this later today and it worked. So from now on there will be no need to limbo under the board. We are all getting to   old to do that anyway.

A while ago I ordered some of the excellent backdrops from Brunel Hobbies in Melbourne. Luckily my backdrop was around 22cm high which matched the height of the printed backdrops. These were installed at Pambula and as this station was on a corner the backdrop needed to curl around on one corner. The first two sheets went on with no hassles, the vinyl they are printed on is great to work with, just peel the backing off and stick. The third sheet had to be trimmed as the backscene tapers downwards around the corner.

As can be seen in the above photo the backscene didn't completely meet the baseboard. I was able to fill in the gap with a section of the dense yellow foam (Knauf board) and with some hacking and a bit of paint it works out well as a good transition section between the vertical and horizontal. I will put a larger piece at the corner to take the eye away from the sharp angle ( for another day). 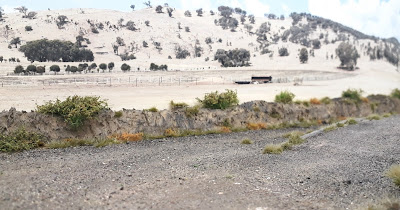 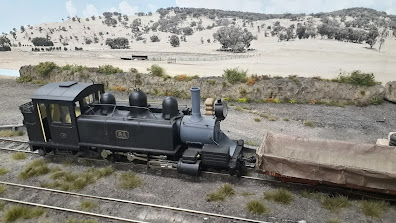 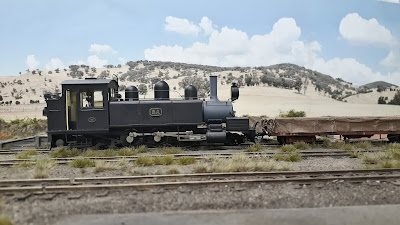 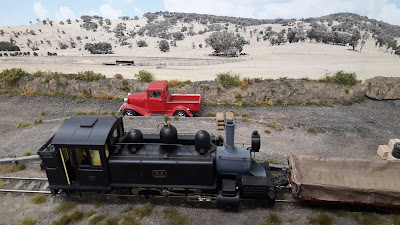 I was also in receipt this weekend of a batch of wagons That a good friend James Black had assembled for me. I don't have the skills to do this work so it was outsourced. The fleet has nearly doubled and finally the livestock will be able to have a ride somewhere in the NM's. When assembled into a long train in Eden yard the NQR's look impressive. He fitted three NQR's with impressive tarps for some variety. It is hoped in the future I will make some timber loads for them.