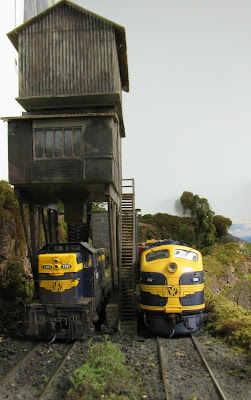 Victorian Passenger Services due to commence.
You can almost feel a trend happening on South Coast Rail with the blue and the yella colour scheme getting more prominent. As can be seen in the above shot a T class has also been added to the roster.
And not only a T class but the first passenger car set, the Auscision "E" car set has made its first trial today running as far as the Candelo Coal Mine branch. Along with the B class it is as expected in pristine condition, but will soon succomb to a bit of weathering.
Lucky as always the official photographer just happened to be on hand to record the trial run of the train from Bega to Candelo.
The E cars come with a warning on the box regarding the couplers locking and causing derailments on curves sharper than 28" and advise the fitting of long shank couplers to overcome this issue. What I will do is put some on but only at one end of each car. This widens the gap for curves but having the couplers long/short at the ends doesn't make the gap between cars as big as fitting long shank couplers to both ends of the carriages. I must admit the cars look good close coupled as they are delivered.
Anyhow nothing more to reveal at this stage so I will put up the remaining photos taken today. And please don't think I am abandoning NSW rail, I am just expanding my modelling possibilities. 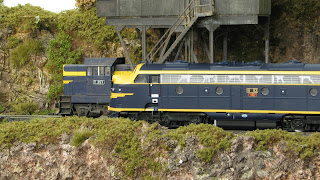 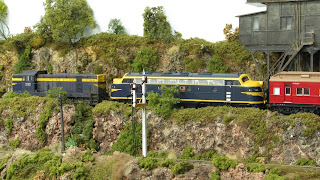 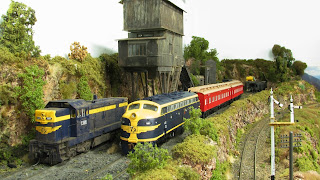 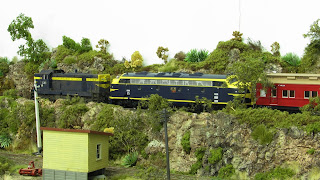 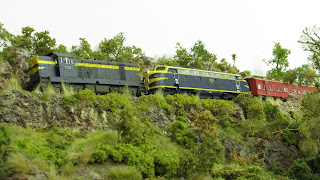 A great Beatles title to their famous song and also the designation of the Victorians first main line diesel locomotive.
The 'B' class could be best described as a loco that doesn't know whether its coming or going or two heads are better than one. Either way I had an opportunity to grab this unit from the recent Epping Model rail exhibition. It was a model that had loose side grills but was reassured that the mechanics were all fine and the grills could be easily be reglued.

My previous blog justified my recent interest in the blue and yellow schemes of Victoria. As with my NSW modelling I am trying to stay true to the 50 - 70's era.

I must admit my sudden interest in VR has left me missing out on a few of the earlier offerings. The VR S class were missed, flat top T's and the beautiful red clerestory non air coaches that Auscision had recently offered. All now out of stock, I'm hoping they do a re-run. (If you have a box of them you no longer want, let me know).

To aid this lastest interest, I purchased a Train Hobby Publication titled "Rail Scene Victoria" which covered the "Blue and Gold generation 1950 - 1979" It is an excellent book of around 98 pages and good value for $42. It captures the era and type of train I would like to model.
One picture on page 31 shows a B class on the Gippsland line hauling a long train of briquettes. I have great memories of these trains travelling through Dandenong when I was still at school many years ago. I was visiting my Aunty and Uncle at the time and would venture up to the station and watch the parade of train pass through.

A recent addition to the fleet was a pack of JX cement hoppers. These were advertised on the Austrains website as out of stock but I managed a pack off the shelf at Toms/Bobs Hobbies recently. I was surprised to see a recent E bay sale of a similar pack that had reached over $330 and considering I had only paid $150 it proves you need to ring around shops first in case they still have old stock. I suppose I should do the same for my passenger cars. LOL.

Today with two friends I paid a visit to the Hills District Model railway exhibition at Castle Hill. They also have a second hand stall there and as we got there just after opening we headed for the stage where the second hand stall was. I said to the guys let me know if you see anything Victorian there. Alas no Auscision passenger cars but I did come across a pile of Steam Era goods wagons. I grabbed the lot. I thought GY, I, should grab the lot. U don't see them often. A good haul indeed.

A fine new standout layout was Binalong, very well modelled so if you are in Sydney get along tomorrow and see it.