Hard to believe that we are into another year. We still have the dreaded covid and its ugly cousin omicron hanging around. It hasn't changed my lifestyle a lot but the loss of model rail exhibitions and the ability to travel around has always put a damper on things. We just have to hope 2022 will be a better year for all.

Progress has been a snails pace on the layout since the last report but not entirely still. The train shed is located in the backyard which is also adjacent to a large garden that I have been working on. The garden always has to take second place to the layout, so when I go down the back to visit the garden I seem to go inside the shed on the way back. These visits can last from a few minutes or an hour or so, depending if lunch or afternoon tea gets in the way.

One thing you can guarantee is that there is always something to be done in the shed. One of the things we are all nearly guilty of is the collecting of items and objects for the layout 'in the future'. They are sometimes purchased because the thought is ' if I don't get them now, they might not be available in the future' This is often a true statement but there has to be a sweet spot where the bottom draw is getting emptied at the same rate as it is filling up again. I have a bottom draw that has a lot of Ian Lindsay model bits and pieces. Ian has now stopped producing his great range of products especially the O scale model parts I have obtained for future detailing. These included , drums, tanks, buffer stops, animals etc etc. These are now gold as they are no longer available from ILM models.

Sometime when I go into the shed, I might get the urge to run a train somewhere. Most of the time the trains tend to hang out at Eden. At the moment with the main line cut just beyond Broadwater where the Thomson River bridge is going and the opposite direction requiring the lift down section being lowered, any trains running at the moment just head to Broadwater and return. On the last trip some NM livestock wagons were shunted into the goods siding. Which got me thinking that I had some ILM cattle. So I got them out of the bottom draw, studied a few pictures of cows on the internet and go them painted a brown colour which was better than the resin colour they came in. Some were also painted black and white. So there are six cattle to be spread around the layout. They will either be staged in a field or be standing in a stockyard waiting for their ride to somewhere.

Another project I have done is to do the preparation of the photos on the backdrop for the Thomson River bridge project. The initial photo was not wide enough so I needed to make another one suitable to match the left and right hand sides. With a bit of photo shopping I managed to so far get the left hand one done and fitted. There was also the need to extend the river section lower so it can blend in eventually with the river. I will cover all of this more in the next 'river bridge' update.

One of the great aspects of carrying a mobile phone around these days is that you always have a camera to hand. So even though at the moment I only have a few scenic spots on the layout I have included a selection of photos from around the layout. Until the next report. 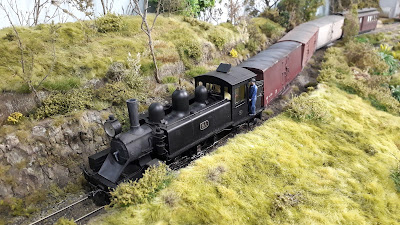 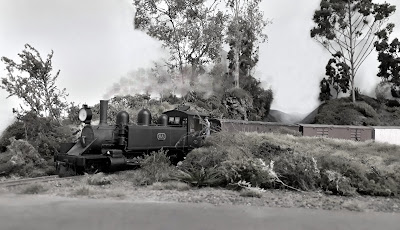 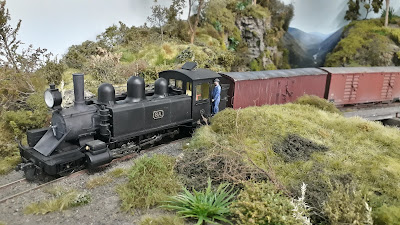 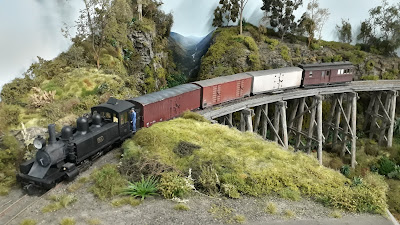 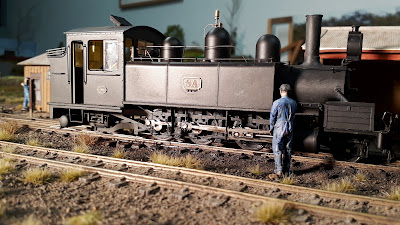 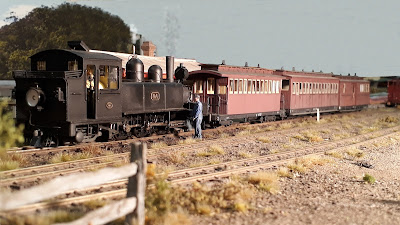 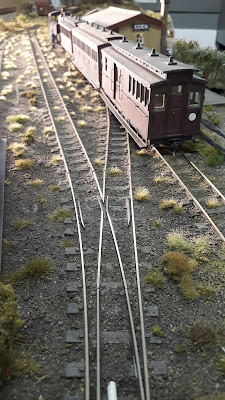 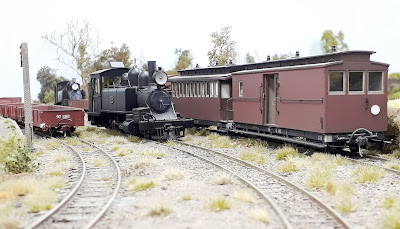