I've got piles.
Sorry don't want to alarm you and no I'm not referring to any medical condition. I was doing a bit of a scratch around of the shed today looking for items that are no longer wanted and fit for an upcoming second hand stall to raise some cash for all the new products flooding the market.
It surprising how much stuff you have that is no longer needed. I will be putting a few wagons in that have been replaced with superior models.
Like most of us out there we all have boxes of kits that have been put aside for the rainy day with all good intentions that one day we will find the time to put them together.
This must be at least the second sweep through my unbuilt collection of kits. Our most precious commodity especially the older you get is time. A great example of this was the DJH 32 class kit that resided in a dark box for over 12 years. The statement that if you wait long enough a RTR will come along held true with the 32. Trainorama had announced they were doing the 32 class and thats when the fate of the blue box of bits and pieces met its end with me. The kit was sold at the Epping Model Rail exhibition second hand stall and although I had to make up the difference in cost, I was handed over a very nice model that ran as soon as the juice was turned on. The 32 was going to be my first white metal kit to be assembled.
Following the 32 class I also purchased the DJH 36 and 50 class kits. These kits met a similar fate. When the Austrains 36 came along the 36 was similiarly despatched the same way as the 32 class. The 50 class was onsold to a guy from work. I was a bit premature with the 50 class as all the forums were saying a local hobby shop were going to do the standard goods range. I now regret this descision as it seems they will be years away and it would have made up into a nice kit.
A DJH 30T kit I had was assembled by a friend ( he wanted practice - go for it I said) and the kit made up into a nice model. The only trouble is that is has not yet been painted. But a few more years of grime fallout onto the loco should see it blackened all over. This loco with regards to painting it has fallen into the same situation as assembling white metal kits. I think its the learning curve that maybe scaring me off. I can imagine soldering the steam dome and missing (Bugger just put a great dent in it with the hot soldering iron). Ah well maybe my answer is to go all diesel fleet or wait till we get ready to run steam models. 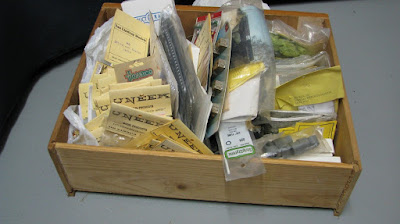 Pictured above is a box of bits and pieces and kits waiting their turn to be dragged out of the darkness, be painted up and placed onto the layout. Don't we all say "I had better get one of those because they might not be around much longer." This is quite true in many cases. But imagine if we didn't do this how many kits less manufacturers would need to make. This box contains kits such as goods sheds, weighbridges and heaps of the fantastic Uneek range that have been earmarked for places on the layout.
I think when the scenery is suitably advanced and near finished, I will dig out this box again and make a start on some of the fine aspects of detailing the layout.
But for now the box is back under the layout awaiting the call.
Posted by South Coast Rail at 23.5.10 3 comments:

Was there an April?
Looking at my last post it was dated March. Seems so long ago. April was a busy month not so much modelling but other things that keep you away from the shed.
Much of the time has been taken up around Bodalla, mainly getting rid of the white cliffs at the back of the platform. Its a long slow process initially to get the plaster down and then to get the colouring right.
After all thats done then comes the slow process of putting up the greenery to make the cliffs realistic.
The platform has recently started receiving the 'tarred' surface courtesy of some 400 wet and dry sandpaper. This will be mainly be at the exit end of the platform and the far end will just have a narrow strip near the edge and the classic crushed limestone courtesy of Chucks Ballast to finish off towards the cliff edge and add some variety on the platform surfaces.
The SM at Bodalla is a keen gardener and he plans to eventually have a garden good enough to enter into the annual gardening competitions. 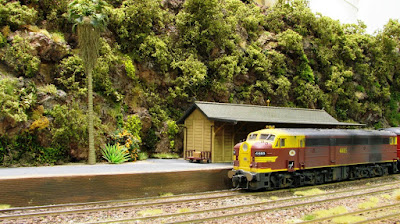 It will be a while before the platform is finished. I will be adding station nameboards, seats, Uneek station lights and station weighing scales as it progresses. 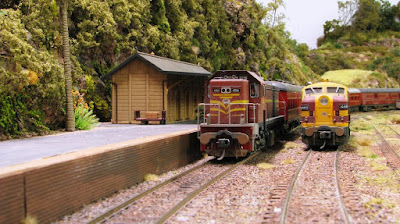 The last shot shows a 49 class arriving at Bodalla with the afternoon passenger to Bega. The 44 class is a light engine movement heading for Narooma where it will bed down for the night being rostered for a livestock special the next day.
Sometimes I wonder if I will ever finish the layout, but I only have to look back on the computer at the photos taken in the same spot five years ago, and then I think 'Nah we're getting there!
Posted by South Coast Rail at 9.5.10 3 comments: