Yet More Scenery Work
Its one of things you have to keep at to make some progress. Saturday night saw a few hours 'attacking' the hill that was in last weeks blog.
This involves planting greenery to get rid of that solid wall of plaster. I am happy with the progress and a few more weeks and I'll move onto somewhere else.
I used some gloss spray onto the rocks to represent wet rocks something that generally happens around tunnel mouths and rockwalls. The spray didn't seem to stay glossy on the rocks but during the week I purchased some acrylic gloss medium and painted it onto the rocks. The results can be seen in the photos.
You can spend too many hours on scenery making fine detail that is only obvious on close inspection, and the beauty of us getting older is that our eyesight is not up to seeing fine detail anyway. As long as you are happy with your results that all that matters.
The scenery this weekend was above the tunnel mouth and just to the right of the tunnel. Being at the base of the cliff a more lush growth was taking advantage of plenty of moisture. 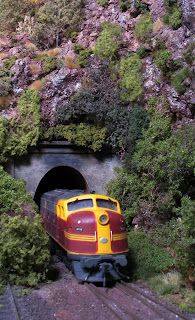 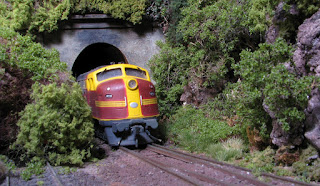 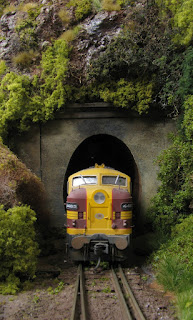 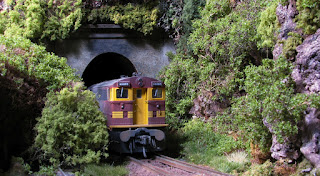 Here are a few shots as I just happened to be near the tunnel with a camera when two freights, one hauled by a 44 class and the other a 421 class went by.
Posted by South Coast Rail at 17.6.12 3 comments: 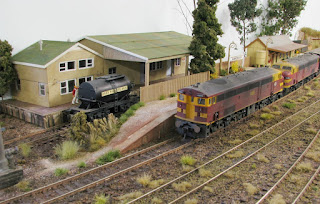 Mention the far South Coast of New South Wales and probably 13 out of 100 people will nominate 'cheese' as a product of the region. You would probably have gotten 82 out of 100 to mention the dairy industry.
But how many towns down that way are named after cows? There is no town called Hereford or Fresian. (although it does get quite nippy). Right so how many towns are named after 'cheeses' At least three I can think of. There is the big one and still going strong 'Bega', the lesser known 'Bodalla' and there is 'Kameruka'. And not by accident these three towns are modelled on South Coast Rail.
Nearly everyone knows the Bega brand and it being the most well known brand happens to be the largest town on the layout.
The above photo of the dairy siding is situated right behind the platform at Kameruka. You would have to be pretty dumb not to realise that the building was not a Kameruka icon. Now to reinforce the point. I recently had given to me a wrapper from a slice of Kameruka cheese. Although the slice of cheese was long gone it was the label that had me interested. I thought if I could scan the label then this would make an authentic sign that could be stuck onto the building. And what would be the greatest accolade would be if a real Kamerukan person was to see and recognise the label on the building.

The donor of the label Wayne was also modelling the same area as me so we had a common interest. He was going to include Eden as one of his stations. I suggested he should have a 'garden' as the main feature as I don't think anyone make HO scale whales at this stage (Go Google if you don't understand the link).
I guess this is the beauty of modelling a ficticous region. This area is so close to the Victorian border and with all the Vic models now flooding the market this is a great reason to justify modelling two systems.
This Monday I will wander down to the Epping Model exhibition and hopefully pick up my cheque from the second hand stall. I had a clean out of some models to raise coinage for recycling into new models. I resisted the temptation to visit the second hand stall cattle crush/stampede on the Saturday morning and will enjoy the more relaxed time on the last day.
Some time ago I had an ex work collegue bring over his sound Eureka 38 class. I then thought I wonder if the two sound locos would work OK together and what would it sound like. So we coupled them up and run them up from Bodalla over to Bega on a short freight. I did a quick video and put the result here. Not a great video but a record in time.

Hi, I'm Cliff.........
Well so far the weekend has been great. It started off well Friday night when my team slayed the dragons in the NRL. Well not exactly slayed, but beat and got the two points.
Saturday saw me join three of the engineers that were involved with the operation of the huge NZZA 800 wagon when it was in operation on the NSWGR hauling six stators from Sydney and Carrington to the northern and western power stations. We all jointly worked on an article that has been printed into the June issue of the Australian Railway History magazine. Two of the three hadn't seen the article until today and they were very happy with the results. So if you want an interesting read go grab a copy. 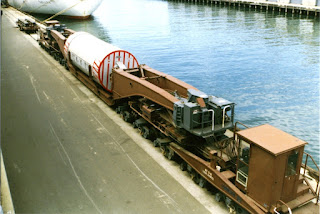 Getting home after lunch in rainy weather certainly put an end to finishing a new deck for the bar-b-que so I grabbed the camera to take a few shots of the new cliff face. At the top of the cliff is the town of Kameruka and is getting close to completion. If you were standing on the top of the cliff and happened to fall off you would end up just outside the tunnel at the entrance to Batemans Bay. 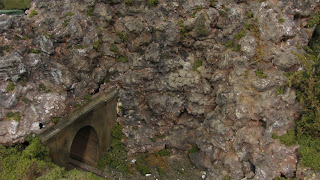 I had done the cliff a few years ago and although I was satisfied with it at the time working my way around this area for a second time I felt that it needed an update. The photo above shows the cliff with all the green foilage stripped off. I felt the plaster work was too smooth and I think that particular batch was on its way out as when bumped the white soft plaster spots came through. 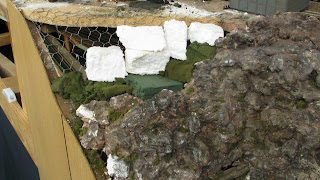 There was a small section that needed to be finished and my method of using small lumps of foam to fill in the gaps can be seen. Under some of the white foam I placed strips of green florist foam. This was to allow the easy placement of bushes later, all is needed is to push them into place.
A small batch of plaster was then mixed up ready to dip the foam into. I have found that to get the rocks with rough edges it is essential not to have the plaster mix too wet. The more water that is in the mix then the smoother the finish will be. I have also tried putting white vinegar into the plaster which slows down the setting rate. I have an aerosol can lid that I use to measure out the plaster and generally use only three lid fulls at a time, other wise it will dry too quickly. This is a messy job and in between mixtures I usually crunch up the previous residue into the next mixture, this also ensures a rougher texture. 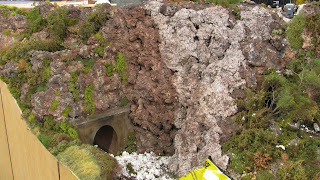 The original cliff face was left there and the new one was placed over it. (Will need a jack hammer to remove when SCR is finished). Although the plaster dries very quickly I am impatient and want to see results straight away and not have to come back next day. Even if it means getting out the hair dryer to dry it out. 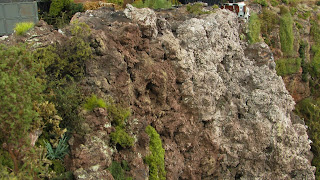 When the original white plaster is done, the result usually looks terrible but as soon as a diluted wash of oxide is bushed over it, then it starts looking a lot better.
The next step I do is to get some brown oxide (used for cement colouring) and paint it over the rocks. In the photo above the right hand side shows the first washover then to the left is another section that has had a second heavier coating. It is important not to go too heavy with the first washover, it can't be reversed and made lighter.
I also used a black oxide again is initially put on lightly. You will get the feel of the colouring as it goes along. 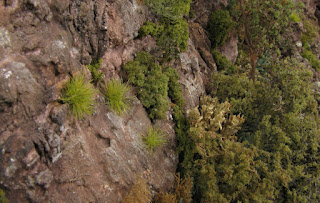 One last thing I do before finishing up for the night is to apply some greenery. This can be many of the Woodland scenic products and some of the newer excellent scenic bushes that are now available. The light coloured bush in the above photo is a piece of dry oregano herb that I got from the local vege shop. So please don't ever use lichen bushes that we all used in the 60's, 70's and 80's. It is too coarse looking.
After the base coat of brown and black oxides are used then I use the dry brush method and highlight various rocks as can be seen in the above photo. This gives it an almost 3D effect. 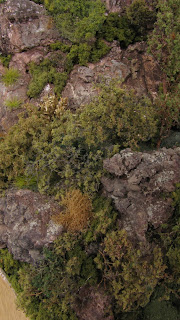 The above rockwork still needs more work done to it but you can see progress is being made. As said in blogs before the layout has many cliffs and very little flat ground, this makes layout progress a lot slower. The towns of Kameruka and Batemans Bay are at the extreme levels of the layout. 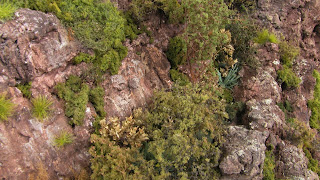 Much more work has to be done on this area, but you can see progress is being made. I will post more photos when this area is more 'finished'
And only another week to go till the Thornleigh Model Exhibition, looking forward to it. We might even have some new models released.