Plates and Palms
Todays blog starts with the letter P. P as in in Plates. And to be precise Depot plates.
These were small oval plates attached under the cab windows of steam locos and on them were the name of the depot the loco was assigned to. 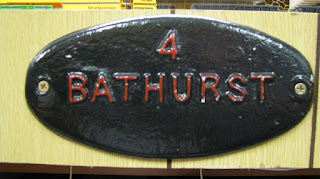 The plate above was from Bathurst allocated number 4. It is thought that by screwing these plated on the sides of the locos they would never get lost and find there way back to the home depot.
So imagine one dark and rainy night at Bathurst 3626 backs onto the mail and heads off towards Sydney, it gets there the next morning into Central, then out to Eveleigh to rub pistons with all the other locos that have come in off the South Coast, Newcastle and all points south. The Loco Chargeman is confused and doesn't know where they all belong. And thats where the depot plates made the job easier. That night 3626 takes the Western Mail back to Bathurst. Such a simple idea.
I just threw in that bit above on the depot plates as a warm up for the next bit. One day at work unbeknown to me a mate drops a bag on the desk. And inside I found a couple of unique depot plates that could become collectors items in a few years. They were depot plates with names unique to South Coast Rail. 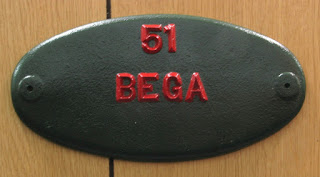 I have placed this plate on the layout edge not only to show it off but to readily identify where the place is behind it.
Not to be outdone Candelo the branch terminus and Narooma also scored depot plates. Luckily these have been cast in aluminium so they won't collapse the layout when attached. 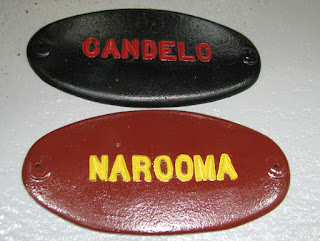 So thanks guys for these deepoe (american pronunciation) plates. Really appreciated.

Now for the second "P". I received through the post this week three palm trees ordered some time ago. They took over a month to get here though. So next time I order some I will order small palm trees and they should be medium size by the time they get here. They are nice models having the fronds made of brass I think. Some of the plastic ones just don't look fine enough. One has ended up in Bega loco and the two smaller ones will be planted down at Bodalla. I will take photos of the said palms when their surroundings look a bit more presentable. Bega loco is a long way off at this stage.
And just to end the blog off here are two photos taken at Bega recently. 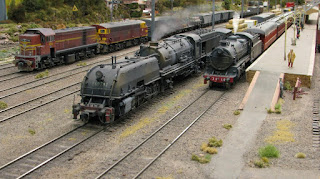 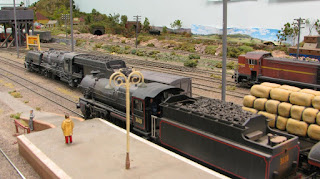 Mates
Last night was my turn to host a group of mates to our irregular what we call our 'film night'. We call it that because thats how long we have been meeting over the years. Most of the guys in the group were old school mates and that was over forty years ago.
We probably hold the gatherings about every three or four months apart and all but one is a modeller. (Never too late to start Chris).
The usual pattern is meet at the hosts place, go have a look and run on their layouts, then go inside for a cake or two or three and then sit back and watch a dvd, rail based always. Then usually around midnight we head off home. It is decided on the night where the next meeting will be and when it gets closer a few emails and a date is settled on.
I did the usual thing going round the layout moving all the tools and generally tidying up before they got here. On the night one of the guys brought his new model of 3801 and we were anxious to see it operate. It was duly hooked up to a set of passenger cars, controller cracked open and off she went.

3801 in full steam through the valley

I was not over impressed with the whistle, but the sound otherwise was good. Ross had ordered a weathered model and I think is a waste of money. It seems like they just queue the locos up on a track and drive them past the spraygun. Save your money guys and get someone else to do it if you can't do it yourself. I was caught out with the garratt the same way. The cylinders were 'dirtied' up but the rear drivers were still virgin out of the box. I have since had it done by a sprayer at a local hobby shop with a fantastic result. There are other photos of it on this blog. 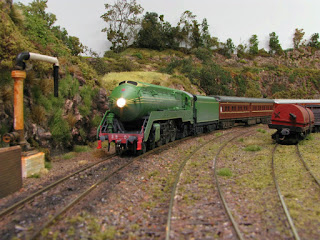 3801 gets ready to take on water at Bodalla

Another mate Kev on the night had brought along a logging train worked by an articulated loco. All was going well until it came across the first tunnel and the headlight snagged on the portal ending its run for the night. I offered him some pliers to snip off the offending light but he declined. 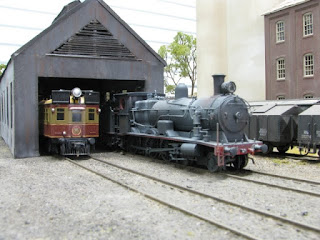 Bodalla more
I have been concentrating on doing more work at Bodalla this weekend. The ballasting has been completed on the main, loop and the three sidings.
In real life usually sidings and the loop tends to have more weeds than the better kept main line. So this means applying more ground foam and other bits and pieces to represent an unkept track. 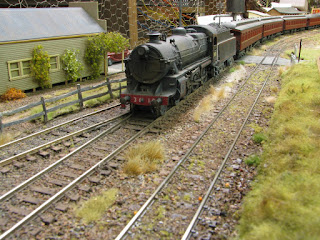 I am fairly happy with the end result and the track and ballast have been suitably weathered to look the part.The picture above shows 3610 on the main line just beyond the level crossing. You can see the loop line on the right how it has more dirt/ballast than the better kept main line. you will just have to put up with the chicken wire a bit longer until I get motivated to do the long rock mountain edge. It is very slow going to get it all right so I can guarantee it will be done by this time next year.
I decided to get the level crossing installed as it intersects the loop and has to be done at the same time. I used cork for the road and matches between the tracks, this then having a layer of grey coloured plaster rubbed over it. Two Uneek level crossing signs were installed. If you want an easy way to paint the words on the 'X' just paint the whole sign with white paint. When dry, sand back with fine sandpaper just exposing the letters and then paint chemical blackener onto the exposed brass. So only the letters will turn black. Sure easier than trying to use a one hair paint brush and going crazy in the process. 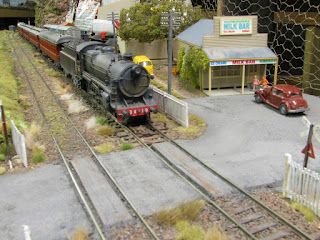 Also placed some Ratio picket type fencing on either side of the crossing. I have yet to finish the pedestrian walkway slightly away from the road level crossing.I also have a gripe with the Peco code 75 points and the very flimsy throwbar that connects the point blades together. One of the blades has come adrift at Bodalla. There doesn't seem to be any easy way to fix it. I will now need to wet down the point, cut away the rail joiners and replace with a new point. This has also happened to two other friends with the point blades coming adrift. Maybe I should write to Peco and ask them why can't this region of the point be strengthened? 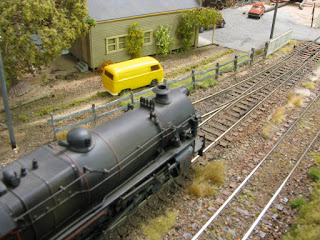 In this last shot the Volksvagen is exiting the road that will lead up to the goods shed one day. It comes out beside the milk bar. I had no choice fellas, the area is not large enough to put the Bodalla pub in.
Posted by South Coast Rail at 8.11.09 No comments: