Farewell 2012
Well another year nearly gone and my last post definitely for the year. It has been a mixed year 2012 with a few events that have slowed things down. However 2013 is already shaping up to be a better year.
To do tonights blog report I had to go back through some older blogs and on reflection it shows how quickly time flys. You can remember putting up those reports and photos and realise it was two years ago. I still maintain it is a fantastic electronic diary of our past achievements all there recorded. So if you have a layout and no blog no matter how big or small, create an account and start one up. You have nothing to lose, if its not interesting then no one will view it, but who cares?
I was going to wish you all a merry Christmas but its too late, so at this stage the best I can offer is I hope you all have a great 2013 and happy modelling.

Luckily we have our group to keep the flame burning. We recently got an email re another get together at Phils. His current layout features on two of my previous blogs. The first was on February13, 2010, the second on November 2011 and then there is todays report. The layout takes pride of place in what in normal households would be regarded as a garage, but has been put to better use to contain a great model railway. The previous setup suffered from water seepage that flowed over a sandstone wall forming the inside wall of the room. It would have been more suitable for modelling the Wolgan Valley Railway than the Main North but after a big makeoverof the room its everything you could wish for. The three rows of flouros over each portion of the layout, as Phil pointed out was to eliminate all shadows. Works well.


A lunchtime barby was organised as a means of getting around the usual rain soaked night we somehow manage to end up with on many of our train nights. It was a beautiful day weather wise and after lunch we adjourned to the layout room to turn a wheel. There was a fair  bit of progress made since last visit (see previous blogs) 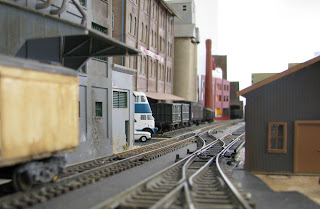 The Wickham branch is for those who like a bit of shunting. Although there is a lot more work to be done here the basic laying out of the buildings has been done. The last shot here shows where the branch joins into the Newcastle branch. Earlier blogs didn't have track laid in this area.
I have an idea that the Newcastle branch here was made as a cover for the wine rack under neath. I would have thought that being Newcastle it would be a good reason to store 'port' there. It seems to be made from stout timbers. 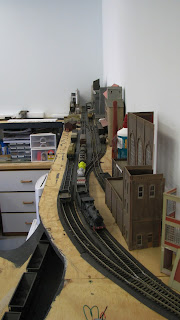 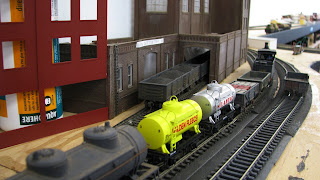 NEWCASTLE BRANCH
Again the buildings have been laid out in their approximate positions. This is one branch that won't be cut back to Wickham or where ever. 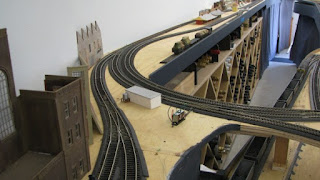 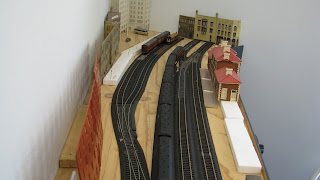 BROADFIELD LOCO
Ideally situated inside one of the balloon loops is to be the loco depot of Broadfield. 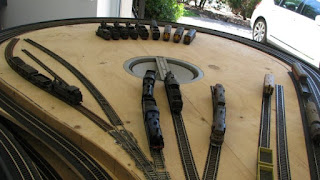 This shot highlights the very neat set up of the room. The two photo montages were prepared from black and white calendars by his daughter who works in the graphic arts arena. They certainly came out stunning. The loco numbers for 3648 were prepared from when you could actually purchase 'surplus' numbers for a few dollars each (based on weight) from Transport House at Wynyard. And also a wall mounted TV for watching sport or even train videos!!


THE MINE
Not sure what this area is called (hence the above title). It fills in another balloon loop. The main lines pass beneath this section. In the second photo can be seen another steam photo that completes the far wall of the room. 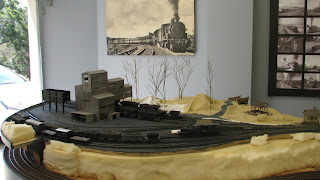 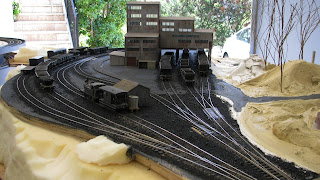 HUB SET
Long awaited as are most models a surprise for us to see was the HUB set no doubt sitting here at Broadfields ready to form the Up Midday Newcastle Flyer to Sydney.
It certainly was showing a bit of road grime. Maybe the cleaners were on strike?

Up the pointy end of the Newcastle Flyer headed by 3803. A common train found on the short north in the good old days.

Well after a few enjoyable hours we all set sail for home and I look forward to seeing it again in the future for another update.
2013 is going to be an interesting year in a few ways. It will be nothing major as I have just checked the results of tonights $30 million Lotto. Yes we won a prize. What is $30 divided by 20 people?

I hope 2013 is a great year for you all and that some of the promised locos and rolling stock eventually turn up. See you all on "the Other Side" of the calendar