I'm Off
Meaning I'm off on a short break from work. Its around this time of the year when the weather is nice and a good chance to have a break before the end of the year. And right in the middle is the Liverpool Exhibition to get all inspired again and make a few purchases.
Bodalla station has aquired a small car park just in front of the signal box and opposite the local store. So it becomes a rush when a trains in and when some of the locals want to park there to get a carton of milk. There is fat chance of getting any extra car spaces there as all the available space is now taken up. 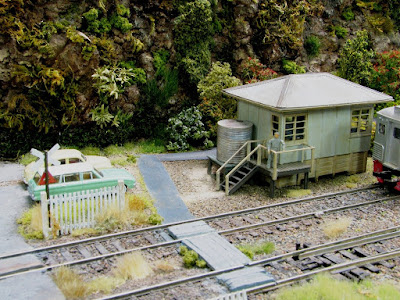 A bit more greenery has sprouted up and a pedestrian walkway across the track is nearly complete.
The signal box is nearly finished. A signal box name board will help the signalman know where he's working and a down pipe into the water tank will stop the ground from getting boggy. I haven't bothered putting a frame inside the box as the door doesn't open anyway and he can't get in. 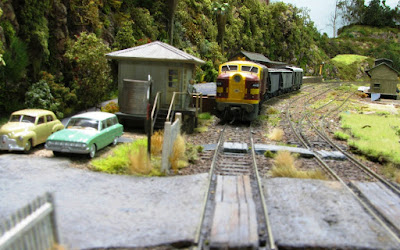 When the superb Trainorama BCH hoppers had come out I was very slow on the uptake and only managed to get a four pack. I figured that this would be sufficient for photography purposes in that if the first four were visible they would show up well in the pictures. I had already about 15 AR BCH's and as usual for me, completed but no decals and detailing on. This was going to be applied 'later', but never did happen. I was also able to build up the fleet with 15 modified cut down Athearn hoppers. These at least were painted and lettered. They made up into a nice long train and when down the other end of the shed I couldn't see that they had no decals etc on anyway.
I was hoping that Trainorama would rerun the hoppers one day and sure enough last week BBB came on the forum and announced they were available once again. So I hot footed it down to West Ryde last Saturday and secured another two packs to now have 12 BCH's for the train. I will get another 4 pack later and make a total of 16 for the train.
The coal mine at Candelo comes off the branch line terminus and means that two return runs have to be made to the mine to load the whole train. This enforced shunting makes for an interesting half hour or so on the branch to achieve. The run round at the mine takes eight hoppers and a brakevan. It is shoe horned onto a small shelf suitably scenicked off from the lower branch. It has a siding which can eventually take a dedicated shunting engine for the mine working.
When I got the hoppers home they were only in their virgin black for no more than ten minutes when I weathered them with Tamiya Khaki Drab and diluted isopryl alcohol. They certainly look better.
I assembled them on the track under the coal loader and they looked good. So I went and got the video camera and tried to put together another video clip. The finished result South Coast Rail 2 doesn't have sound only the wheel sounds and stuff me when my digital watch decided to go off. Also a blackened out section where I deleted an out of focus piece. (Just pretend its in a tunnel). I am still learning the software and it takes ages to render and more ages to upload to Youtube.
Anyway enjoy the clip warts and all. You will find it here if you have ten minutes spare. 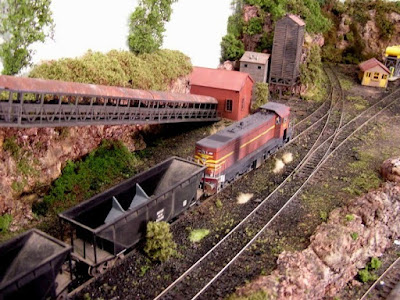