The South Coast railway is in an area where many new locos are taken for running in and loads trials.
Recently I had a friend Wayne bring up his newly released West Australian Haskell L class loco.
It wasn't hard to miss. I think it is where they got the idea to make safety vests in orange. To compensate for this brightness a blue band was put horizontally along the loco.
Trials were successful.  The photographer caught up with the train at Bodalla where a triple header train hauled by a B, Y and T was passed by the L class on trial.
A few photos of the trial are here below. 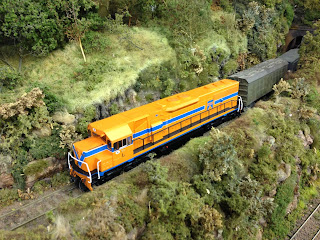 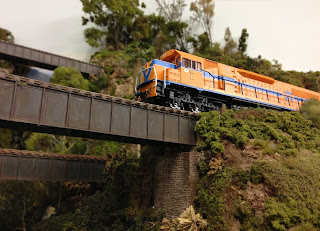 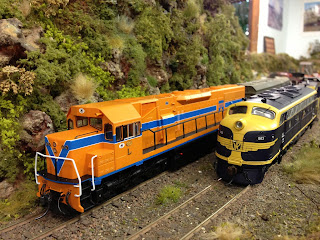 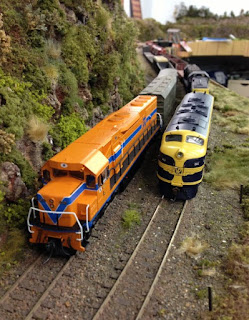 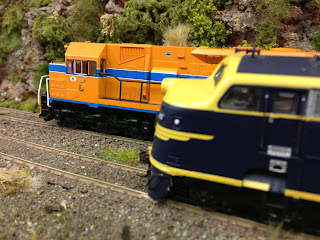 
Over the last few blogs I have been giving gentle hints that all's not well at SCR. The blog updates when they appeared have been few and far between and they were mainly to show new locos I had bought. Many had been on order for quite a while. Although now retired from the workforce, and the understanding that you now have plenty of time to devote to your hobby, well it hasn't worked out that way.
All I can see for the past two years effort is the rebuilding of Candelo.
While this was enjoyable to replan and rebuild, this was only part of a complete rebuild I had planned for the layout. I had been restless for a while contemplating whether a change would get me out of the rut I was in.
I considered building a busy British terminal layout where train would come in, locos changed after being sent to the depot for recoaling, watering and turning. A plan was devised and drawn out. Now for some reason I went off that idea even after purchasing a copy of the Railway Modeller Annual for 2015.

Then there was consideration for a small intense American shunting type layout where many sidings could be shunted and trains broken up and re marshalled. I regularly visit the Model Railroader forums as well as the Model Railroad Hobbyist forum and read their monthly e magazines.


I was getting frustrated with the layout. I only had a small fleet of locomotive numbering under 20. These were still DC as I hadn't made the jump for an extra 'C' to become a DCC modeller. Rolling stock had been slowly pruned back over the past few years, getting rid of many superseded models and ones that didn't fit the era. Why would I need 6 Lima TAM sleepers? These were models we seemed to accumulate, we always planned to convert these twelve wheelers to "another code" but it never happened. We always believed that if they were kept under the layout long enough a ready to run model would eventually appear.
Another idea I had was to have just a small layout, a spaghetti bowl with a mix of electric changing over to steam/diesel to make it operationally interesting. This got to the planning stages with the proposed diagram shown here. It didn't get built but was an interesting project. Small trains and small locos to match. 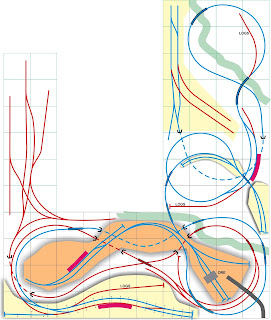 The current layout was started back in 1999 after the former 20 x 12 single garage had a 4 x 4 metre extension added on. As I said to the wife when we had a concrete truck coming to pour the floor for a family room extension, it would be a shame to waste it. So that's when the shed got extended. If you find yourself in a similar position, tell the wife that it will add capital value to the house if you ever decide to sell it.
Not wanting to push my luck too far with the finances, I decided to erect the shed extension myself. I did woodwork for two years at school and hoped this would get me through the build. Google and Youtube wasn't a big thing back then but with a set square and Pythagoras theorum in my head I started the rebuild. I remember having to demolish the rear wall of the shed so it could join up with the new section. I don't think the asbestos hoodoo was a big thing back then, so the back wall was taken down and disposed of. So far so good I am still here fifteen years later. But the thing that nearly put an end to everything was when I had to remove the back window. It was rather large and after I had sawn through the nails holding it in, I then tried to ease it out and lower it to the ground. Doing it single handed, little did I realise that it must have been quarter inch glass or something similar. So when it came out free of the frame it fell straight down to the ground, knocking me off the ladder. Luckily it didn't break itself or me. A bonus was that I got to recycle the old kitchen window from the house to be used in the shed. Who cares if it was mission brown? The shed was eventually completed (and still stands today) It was lined, painted blue and more flouros fitted.
The old layout in the original garage was slowly dismantled, a new design worked out. The final plan was eventually decided upon and a panel was made. Being DC, I decided to provide a panel that would operate each section of track with a gang of 5 push buttons. These pushbuttons originally had eight buttons on them but I removed three as I thought I would never have eight operators at the one time. Don't think I have even had four controllers plugged in. This way any of five controllers all could have access to every section of the layout.

The panel took a while to complete. It was done on a sheet of perspex that had each side protected with brown paper. The idea was to draw the final layout plan in reverse on the backside of the perspex. 5mm strips were then carefully cut out with a razor blade, gently peeled back and painted a single colour for each powered section.

This took a while to do and then hole had to be drilled for the push buttons. Also the holes for the push buttons for the point motors and other various switches. I had to be careful that the gangs of push button didn't infringe on each other on the backside of the panel. Then many hours were spent wiring it all up and running out the power wires to the various sections.
The design of the layout had to be final as it was almost impossible to add or change the panel once the brown paper was cut on the backside.  When the last of the track sections had been cut out and painted, then a spray of black gloss paint was sprayed all over the back. This then sealed it all and when viewed from the front provided a panel that couldn't be scratched off. The panel has been successful. Everything went okay except for one operating session when one section wouldn't work. But the train took off when I opened the panel and stopped when it was closed again. Rather than try and solve the problem there and then I spent the rest of the session opening the panel each time a train would enter the problem section. It was eventually sorted out. You hope when you first do the panel that if you do it properly then you shouldn't have any issues later on.

(To be continued next posting)