Vertical as opposed to horizontal 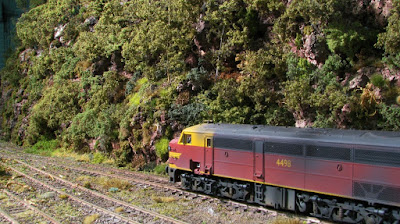 I may have said this before but because of my design of layout I do not have many areas that lend themselves to modelling sweeping plains and fields. So my scenery mainly goes up and down as opposed to across. If I had only wanted to go around the shed once then this type of scenery would have been possible. Hopefully my final design of the layout with two laps of the shed has allowed extra crossing stations with still a fair bit of running in between.
We always seem to set ourselves impossible timetables. I had thought that by the end of last year I would have had all the scenery finished and would be onto the building construction stage. Ahead I have to build a station building, roundhouse and a coal stage based on Armidale. These will all take many hours.
Any how I spent a few hours tonight down the shed attacking the cliffs of Bodalla. This is by no means fast work. You sort of put a bit of green 'stuff' on and then stand back to see if it works and looks okay. What would speed things up a bit more would be to actually sort my scenery material into some sort of order. Unfortunately I am not that organised, but at least its all down one end of the shed.
Tomorrow I don't think I will see the shed again as I will be tackling the front down pipe from the gutter which I found was well and truly rooted. I have managed to get most if it out and hope to have fun with a rubber O ring and marry some pvc and clay pipe together.
Anyhow I will post some of tonights effort on line of the vertical type of scenery. The following shots were taken at Bodalla 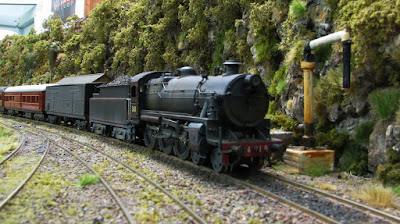 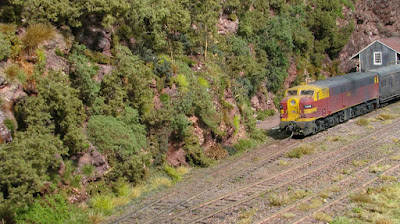 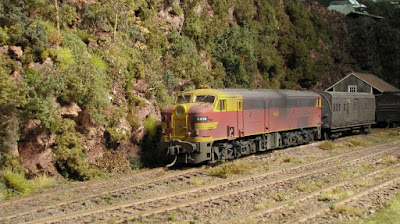 Still raining
Well its another stormy night in Sydney, so I hope I will get this blog posted before the lightning cuts power. Good news the trains seem to operate OK today and I got home at the normal time.
Besides lightning knocking out the power for the trains and signals I still have two other reasons to dislike the rain. One is the poor old shed is vunerable to leaks (but when I checked tonight none so far) and the other is that I have discovered that my down pipe from the roof guttering to the street seems to be blocked somewhere and is overflowing. So I guess this weekend will be taken up digging up the pipe and try and get to the root of the problem.
Managed to get a small amount of scenery done on the weekend. A few inches for so many minutes.
I also had a visit from Dr. Marcus Ammann recently and he brought along his bag of tricks. He was a long time gunner come and have a look at the layout, but when my garratt had decided to lay down with a short, he found the sweet spot with the wand and got it going again. Thanks Marcus. 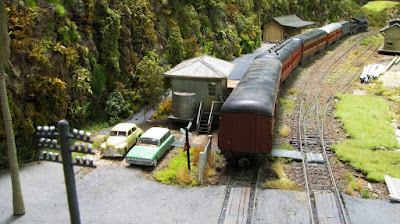 I was recently talking with an ex work mate Jim Harris who had built a layout based on Yass Town and Yass Junction. This layout operated in a shed until recently being sold to a guy up Mudgee way. Jim is now planning a new layout based up the North West of the state namely Boggabri and Moree. So I suggested to Jim why doesn't he make a blog for the layout and share with all. He has started one called the Kamilaroi Railway. I am not sure what the attraction of the North West is but Jim now makes at least 4 modellers I know modelling this area. We have Darren with Gunnedah and Beyond and Blair and Lance from Texas all doing the same.
I have included the link for Jims layout here. He is relating currently to his Yass layout and I'm sure in time will start posting about his new layout. 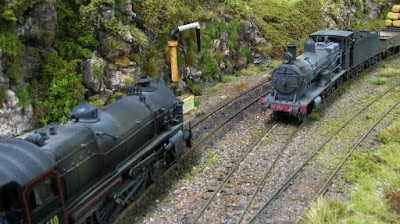 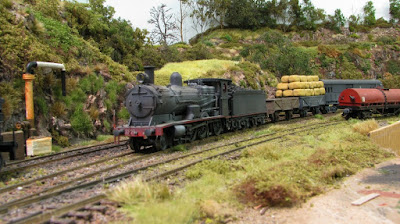