"WARNING" Read this before operating your layout.
Well from today Sunday 1st of July 2012 will be the day railway modellers will well remember.
Yes welcome to ‘Carbon Tax day’. This is a sad day we were promised we would never have.
It has been made sad because from now on electricity along with a host of other things are going to be dearer.
Now this can have a very detrimental effect on the model railway hobby and I will try and explain why with a few dot points: 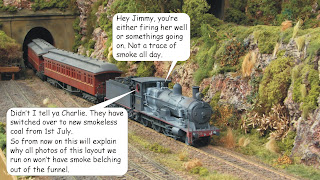 Well I'm sure you will be able to add to the list above, and I hope this tax doesn't have too much impact on the hobby. Enjoy.