A bridge too far


When I was modelling the New South Wales railway in HO scale there were hundreds of track designs that could be modelled. It varies from a boring loop with two set of points way up to the likes of complicated locations such at Central Station and varying degrees of complexity in between.


Then the modeller may just like the northern, western southern or other specific districts and want to faithfully model stations purely from that area.


The other option is to just model  freelance and do your own thing such as name and track design. I did this on the HO layout, calling it South Coast Rail. I then had stations such as Bega, Batemans Bay and Narooma, locations that never had and never will have a railway although many were proposed in the past.


I continued this theme when I converted to Victorian narrow gauge, the layout name South Coast Rail was retained and some of the station names were reused.  The former Bega on the HO layout was a major station with three platforms and two docks, a large freight yard, carriage sidings, loco depot area and a few private sidings. But having converted to narrow gauge I now had to rethink small.  Bega has a main line, loop, a goods siding and a two track loco depot area. A shadow of its former namesake. 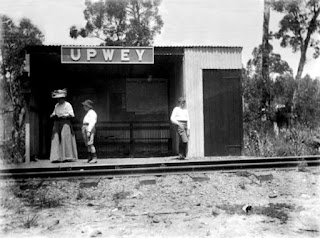 There will be a few of them around the layout. They don't even need a platform to be used , just surround them with some dirt and they are good to go.


Apart from the usual goods shed, livestock yards and other buildings on the layout there is not a lot to be constructed. I also don't need signal boxes and associated signals so another time saver over my previous HO layout.


When designing the narrow gauge layout I was looking for standout items. One of the iconic features of the narrow gauge line from Belgrave to Gembrook is the trestle over Monbulk Creek and is just a few bends out from Belgrave. Many photographers gather at this spot and many a fine shot has been taken there. I saw this as a challenge and was on the early list for inclusion on the layout. The trestles construction has been well covered in earlier blog entries so if you are interested you can go back and see how this corner was developed.

Adjoining the trestle is the town of Broadwater. It has a crossing loop, a goods loop and a dead end siding which will eventually have a livestock loading facility . There is also a private industry siding to add some operation interest. I haven't even given a thought as to what will be at this spot yet. The line coming off the trestle turns 90 degrees into Broadwater and then turns another 90 degrees having traversed across the roller door. This turn then points the track along the long wall of the shed.


It would have been around the time after I had returned from Victoria on our first 'rail gunzel weekend' with some mates. One of the trips we did that weekend was to ride the 'Snow train' from Melbourne out to Moe and then transfer by coach to the town of Walhalla. My research of the Victorian narrow gauge lines was well advanced at that stage and I was purchasing every book and publication and  bits of info I could obtain. I had seen photos of the Thomson River bridge in books and it was a motley collection of bits and pieces that went into getting the railway line across the Thomson River.
It soon became apparent that I should try and make a model of this bridge, so the research began. The line into Walhalla opened on the 3rd May 1910. Doing the maths this makes the bridge well over 100 years old. The chances of any plans still existing was unlikely. Making this challenge easier these days is the invention of the internet and the existence of like minded forums can generate great results. Questions can be put on line and sometimes within a few minutes an answer to the question can be obtained. The jewel in the crown was the fact that plans were available of the Thomson River bridge and I was kindly sent a copy by a member of the forum. (Sorry forgot your name) Again almost instant gratification can be had when the plans turned up. There were around nine pages of plans. Some information was excellent and easy to read but unfortunately critical measurements were impossible to read. I can only presume the original scanner did not have access to a decent scanner at the time or the original plan scanned was not legible. Anyway some is better than none.
Amongst the plans was a plan that laid out the lengths of each of the spans that were either supported by timber or the concrete piers. As I was modeling in O scale 1:48 scale a quick total of dimensions came out with a model around two metres long from end to end. All of this combined with the fact that in August 2016 I had actually travelled over this bridge by narrow gauge train and was standing beside the bridge taking as many photos and measurements as I could in the allotted  twenty minutes that the train was standing at Thomson station.


It was at this stage that I decided I would attempt to make a model of this bridge for the layout, so in the next blog entry I will detail how my attempts have been working out.
Posted by South Coast Rail at 21.10.19 3 comments: