So while work has quitened down on the layout for a while, I thought I would outline some of the background thoughts on the design of my VR narrow gauge layout.

The HO NSW layout managed to last from 2000 until 2015 and at that time I got itchy feet on a new challenge. This is not an unknown disease for railway modellers and has no known cure. The HO layout was completed with all track work done and the majority of the scenery was in place although it was always the intention to go back and improve the scenery when time permitted. The layout was done when DCC was in the early stages and never being one for understanding electronics I stuck to the tried and true DC format. When I was told that I could operate a sound loco on DC I went and got the Eureka Garratt which I was very happy with. But it didn't go beyond there.

I was told if I went DCC then you only need two wires to the track and the rest is done through the throttle and that you could even run two trains towards each other on the same track as per the Adams Family.

The HO layout sported a control panel that had a gang of five push buttons for each section of track, the theory was there could be up to five operators working trains at once. But looking back that never happened, maybe four was the maximum ever achieved.

After a trip to Victoria riding Puffing Billy I thought maybe this might be another choice for me to make. At the time after some investigation there were still the Ian Lindsay selection of VR narrow gauge rolling stock available and to nucleus was the NA locomotive that was made by Haskell Models. Had this not been available who knows what I would have ended up modelling?

So the choice was made and I started selling off all my models, books and anything else that could be converted to cash. I must admit a lot of the fun is the research and planning that goes into making a new start on a layout. I really liked the HO layout and it was hard to do the first hammer blow and start demolishing, but after a while the pain had been replaced by enthusiasm I was getting on the new build. Having been through other scales and modelling options throughout my life this was a new adventure.

I was lucky that I had a large shed for the new layout. It was extended back in 1999 from basically a single car garage size to having an extra 4 metre by 4 metre extension added.

To design a narrow gauge layout I needed a total rethink in track design. Most track designs for the narrow gauge are basically boring with just loops so what I had to rethink was how to make the whole operation more interesting. I thought I could do this with the emphasis on operation. VR narrow gauge operation relied a lot on potato and timber traffic and throw in some covered vans and a few livestock wagons then that was basically the package. To add further operation I obtained a six wagon timber train and a six wagon coal train. True these full timber and coal trains never operated on the VR but my fictional layout was based on the south coast of New South Wales so anything goes. The timber and coal trains were also an excuse to obtain both a shay and climax locos. They will bring the loads down from Candelo to Bega where a loco swap will take place for the trip around eventually to Bega for unloading. And then the return trip will have the reverse working.

The HO layout was completely demolished on  the left hand side as per the above plan and the new layout was designed in a modular style to both aid a future sell off or relocating to a retirement home or some other reason. The layout on the right hand side of the plan will be sacrificial and hopefully will be able to be rescued (i.e. pulled apart) in future times. This is basically built on the old HO baseboards which were built permanently in place, never meant to be pulled apart. The middle 'blob' on the right was a part I wanted to incorporate in the new layout mainly because it was there and was built very strong. At this stage I wasn't sure of the final configuration on this part.

There are signature pieces that make this build interesting rather than just a flat style layout. I have tried to build my version of the Monbulk trestle just outside of Belgrave on the Puffing Billy line. 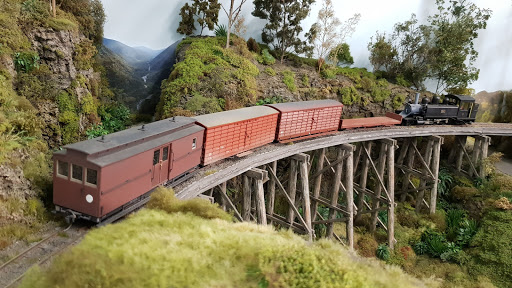 The other big build is the Thomson River bridge which is coming along well and will hopefully be finished soon. Being nearly two metres long in O scale it is taking a while.
I had the left hand of the plan finalised but it was the fitting in of the branch that was causing angst. It was still hard to take the brain out of HO thinking as the track was the same width and you would lay it all out and it would work but when the buildings were in place then the real estate area soon gobbled up room. In the above plan it incorporated a reversing station where you would run out from the main, run around and then head up to the branch terminus. Then there was a siding for the logging train. Sort of a forced operation.

I ended up with the above plan which I am happy with. It is large but how could you have a big shed and only half fill it up with a layout? It provides plenty of operation and is big enough for operators not to get in the way of each other. As the plan stands above all the track has been laid except the section between Bega and Snug Cove across the door. As soon as this section is done then there will be a continuous run available or an out and back run from Eden. Couple this with log and coal trains running then things can get interesting.

So far I have only released photos from Eden up to Pambula as the rest of the run is bare track through unsceniced sections. Control is via NCE wireless controllers as it would not have worked with wired controllers.

So that's the full layout as it stands and as more is done there will be more updates. Once I had done the plan above I was able to produce the following schematic diagram which also shows the elevation of the tracks and length of run. 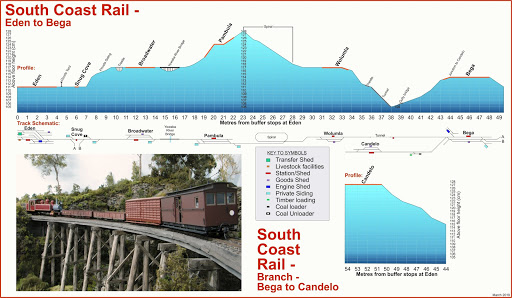 Also a plan of Broadwater was drawn up, it also shows a simulated train in the loop. Each station will be done in turn.

As you can see from the plans, I am a big fan of not having the tracks run parallel to the baseboard edges. I think gentle curves look way better. 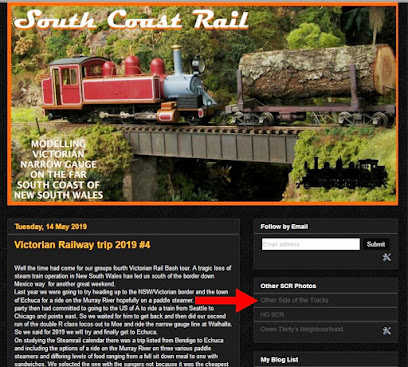 I have uploaded more 'Other Side' explanations for the record. More to be added in future.